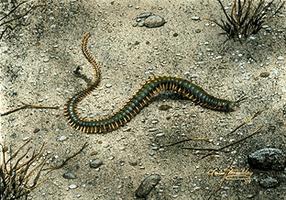 Polychaeta, one of the 3 classes of annelida, are mainly marine worms (artwork by Claire Tremblay).

Annelida is a phylum of segmented worms with a true body cavity (coelom) separating gut from body wall. Annelids probably evolved from unsegmented coelomates which became segmented to allow continuous, active burrowing. In turn they gave rise to arthropods. Although annelid mating systems vary quite widely, most Canadian oligochaetes, leeches and many polychaetes are hermaphroditic. The phylum is divided into 3 classes: Polychaeta (mainly marine worms); Oligochaeta (earthworms and many freshwater worms); and Hirudinea (leeches).

Annelids are mostly vermiform (worm-shaped), with an anterior (frontal) mouth preceded only by the prostomium, bearing sensory organs; the anus is posterior. Most have bristles (chaetae or setae), usually arranged in 4 groups on each segment. The frontal brain has 2 major connections running around the esophagus to the first of a long series of segmental ganglia (nerve masses) along the lower side of the worm. In earthworms the ventral nerve cord has 3 special, large fibres that allow emergency messages to pass quickly from one end of the worm to the other along the otherwise rather slow conducting system. These fast pathways enable worms to make quick escape movements from predators.

Worms were the first animals to evolve closed blood vessels, some of which have become enlarged to act as pumps or simple hearts. Very simple eyes and some tentacles may form a head. Some worms bear gills on various body parts, but most breathe through moist skin.

There are few internal organs. Worms excrete through the body surface and by tubular nephridia (kidneylike organs). Their simple guts may have a few special organs, and there may be areas for storage (crop) and for breaking up food (gizzard).

Only some leeches have teeth, used to chew live prey or pierce skin for bloodsucking. Some polychaetes have jaws or teeth of cuticle. These may be on the end of a pharynx that can be rapidly pushed out to seize or bite prey (eg, blood worm, Glycera). Many tube-dwelling polychaetes have elaborate tentacles for capturing food particles.

Polychaetes [Gk poly, "many"; chaetes, "bristles"] are nearly all found in the sea or in estuaries; a very few, including the Canadian Maniyunkia, are found in fresh water.

Worms with fewer bristles, oligochaetes [Gk oligo, "few"], live mainly on land in moist burrows. These include earthworms (Lumbricidae family and allies) with 8 setae per segment. Other similar but smaller oligochaetes have up to 120 bristles per segment; fewer (about 24), arranged in 4 bundles, are usual. These worms may live in the deep sea, along shorelines, in rivers and lakes, in moist soils, in water trapped in plants or on glaciers such as ice-worms) (Mesenchytraeus solifugus).

Very large (up to 8 cm long, 5 mm in diameter) rose- to brown-coloured enchytraeids found in ancient unglaciated soils of the western Yukon have adapted to cryosols (soils subject to daily freeze-thaw cycles). Small, white enchytraeids are familiar denizens of compost heaps and orchard and forest litter. They are also raised commercially as fish food. Oligochaete food ranges from bacteria in soil to algae, vegetable matter and some animal remains; one species eats live prey.

Leeches (Hirudinea) always have 34 segments but no bristles. They move about using 2 suckers. They live in fresh or salt water, or on land in the tropics. Many are external parasites of vertebrates; some eat snails and worms. 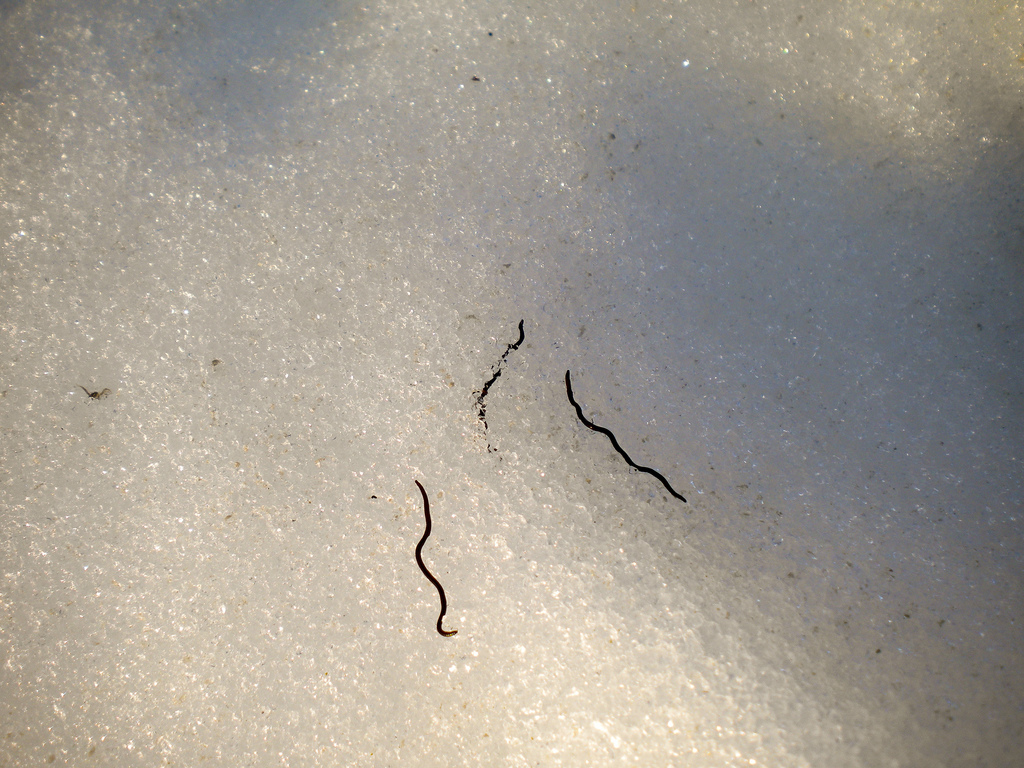 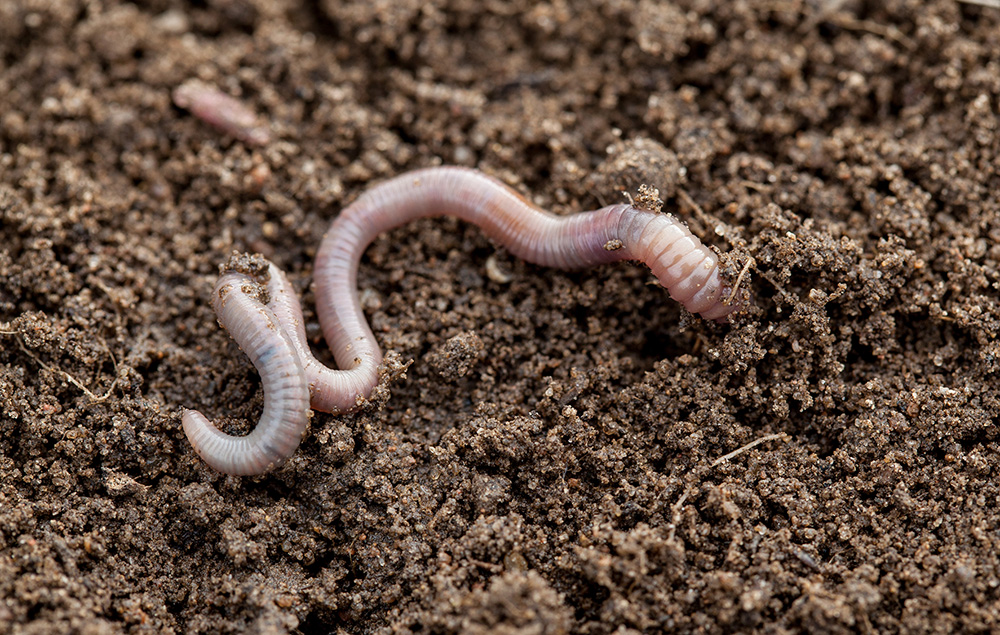