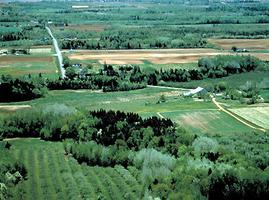 The Annapolis Lowland, (more commonly known as the Annapolis Valley) is situated in Digby, Annapolis and King's counties, Nova Scotia. It extends 155 km from the east shore of St Marys Bay eastward to the west shore of Minas Basin. Geologically founded upon weak, mainly red, sedimentary rocks of Triassic age (250-205.7 million years old), its elevation ranges from sea level at its western and eastern ends to about 35 m in the centre, rising to about 60 m on north and south flanks. The lowland is overlooked on the north by the basalt-capped escarpment of North Mountain, which rises to 180-240 m, and on the south by the granite upland of South Mountain, rising to 150-210 m.

Following the retreat of glacial ice, about 13 000 years ago, the lowlands were nearly completely flooded by the sea to a height of 30 m. Subsequent isostatic uplift caused withdrawal of the sea, but in the last 6000 years sea-level rise has led to the growth of extensive salt marshes at each end of the lowlands, through which the Annapolis and Cornwallis rivers flow in broad meanders.

These marshes were the focal area of Acadian French settlement from the founding of Port-Royal (1605) to the mid-18th century. Dikes were built by Acadians to regulate tidal flooding of the marshes and to permit their drainage for use as rich hayfields. Towards the centre of the lowlands, well-drained, stone-free soils on undulating topography free of spring frosts form the basis of apple orchards and dairy farming.

Principal towns include Kentville, home of an Agriculture Canada research station; Digby, terminal for ferries to Saint John, NB, and a fishing port; and Wolfville, home of Acadia University. The name derives from Annapolis Royal (for England's Queen Anne), the renamed settlement of Port-Royal. 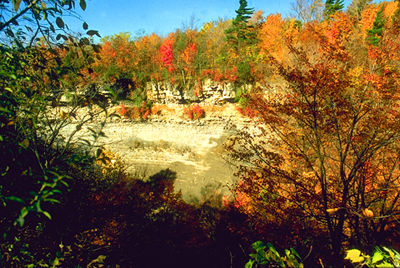