Andrew Qappik, CM, RCA, Inuk graphic artist and printmaker (born 25 February 1964 in Nunataq, in what is now known as Nunavut). Qappik helped design the Nunavut flag and coat of arms, as well as the logo for the Government of Nunavut. In 2017, he was appointed to the Order of Canada “for his contributions to defining the visual culture of Nunavut as a master printmaker and sculptor.” He is based in Panniqtuuq (Pangnirtung), Nunavut.

Andrew Qappik, CM, RCA, Inuk graphic artist and printmaker (born 25 February 1964 in Nunataq, in what is now known as Nunavut). Qappik helped design the Nunavut flag and coat of arms, as well as the logo for the Government of Nunavut. In 2017, he was appointed to the Order of Canada “for his contributions to defining the visual culture of Nunavut as a master printmaker and sculptor.” He is based in Panniqtuuq (Pangnirtung), Nunavut. 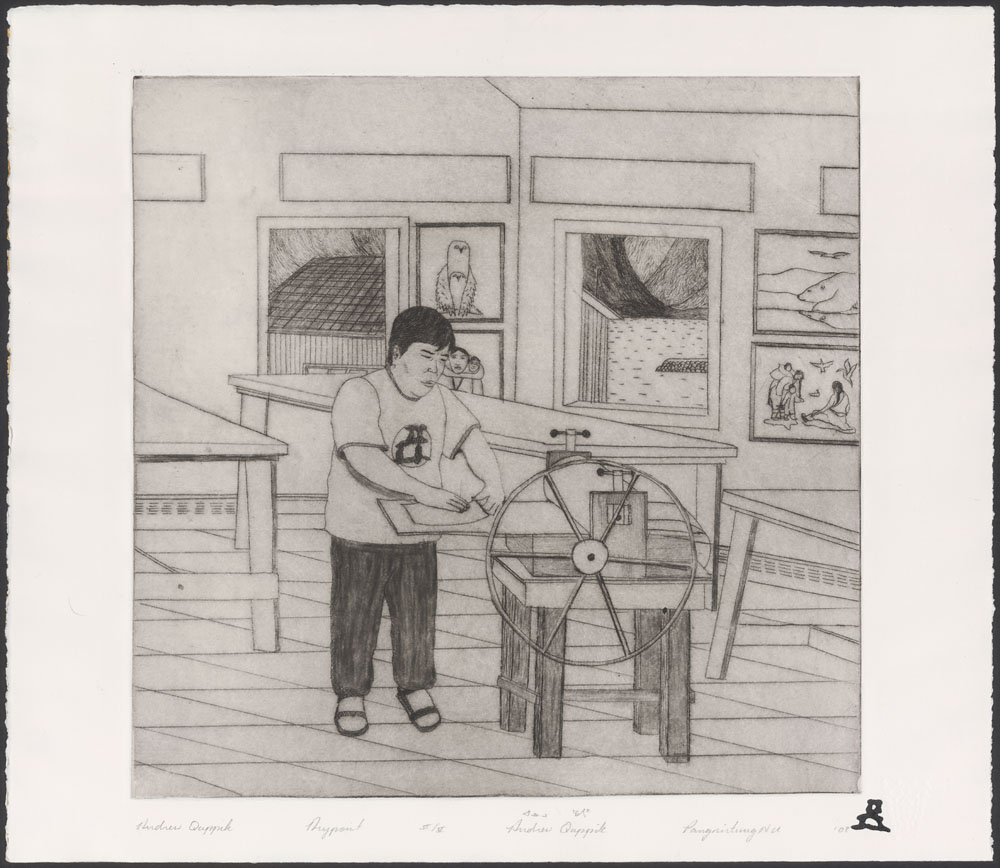 Andrew Qappik was born on 25 February 1964 at the small outpost camp of Nunataq, in what is now Nunavut, about 64 km from the east Baffin Island settlement of Pangnirtung. He moved to the Pangnirtung community with his parents when he was a child.

The third generation artist began drawing when he was eight years old. He began his artistic training by copying images from comic books and sketching his classmates and teachers. His uncles, Solomon Karpik and Imoona Karpik (see Inuit Printmaking), and his paternal grandfather, Pauloosie Karpik, are among those who encouraged Qappik to copy their work in order to learn formal techniques. They also told him stories about his ancestors and about Inuit spirituality and traditions. These stories and traditions, particularly those about the importance of animals in Inuit culture, have heavily informed his art practice. Many of his prints represent animals either hunting or being hunted, while the well-known Favourite Place to Be(1993) depicts an ambiguous but respectful relationship between a hunter and the fish he sees under the ice. Animals in Qappik’s work often have personalities, whether cunning or playful, and his prints sometimes have subtle hints of humour.

By the time that Qappik was 14, he had five catalogued prints published in Pangnirtung’s annual print collection in 1978. Pangnirtung’s printmaking workshop had been established in 1973. Qappik began apprenticing at the print workshop when he was 17, first cleaning up after the other artists, then creating parts of stencils and cutting them, before finally being able to produce his own drawings.

Qappik is a regular contributor to the Pangnirtung Print Collection. His works are characterized by a naturalistic style and often employ multiple perspectives simultaneously. He is considered a master of stone cut, etching, dry point, lithography, and stencil, and is particularly known for the subtle colour variations in his stencil prints. Qappik represents traditional Inuit themes while also attending to contemporary Arctic life (see Arctic Indigenous Peoples in Canada), including family activities and hunting. However, he has said that his work has no political or social commentary. His subjects are usually based on stories he heard from his relatives about Inuit traditions and spirituality or his own experiences of the land. Qappik also depicts background landscapes in many of his prints, which is atypical in work by older Inuit artists.

Qappik had his first solo retrospective, Andrew Qappik: Pangnirtung Memories, at the Winnipeg Art Gallery (WAG) in 2010. Darlene Coward Wight curated the show. The WAG exhibition included 32 of Qappik’s prints that had been donated by Dr. H.G. Jones, a collector and Professor Emeritus of History at the University of North Carolina, Chapel Hill. Jones had initially purchased all five of Qappik’s prints that were included in the 1978 Pangnirtung Print Collection when Qappik was 14. In the following 31 years, Jones purchased every Qappik print. In 2006, he donated his collection of Qappik prints — all 140 of them — to the WAG. (The WAG has the world’s largest collection of Inuit art.) Qappik’s solo exhibition also included an oil painting entitled People of Pangnirtung (2009), now in the WAG’s collection.

In 2017, Qappik was an artist-in-residence at the Winnipeg Art Gallery, where he conducted printmaking workshops.

With his wife, Annie, Qappik has created a shelter in their home for women who have fled abusive situations. Although he is well versed in Inuk (see Inuit) spirituality and traditions, Qappik is a strong believer in the Christian faith. Qappik was a deacon at Pangnirtung’s Anglican Church for 12 years, and in 2012 he became a co-pastor, leading the congregation at Full Gospel Church. 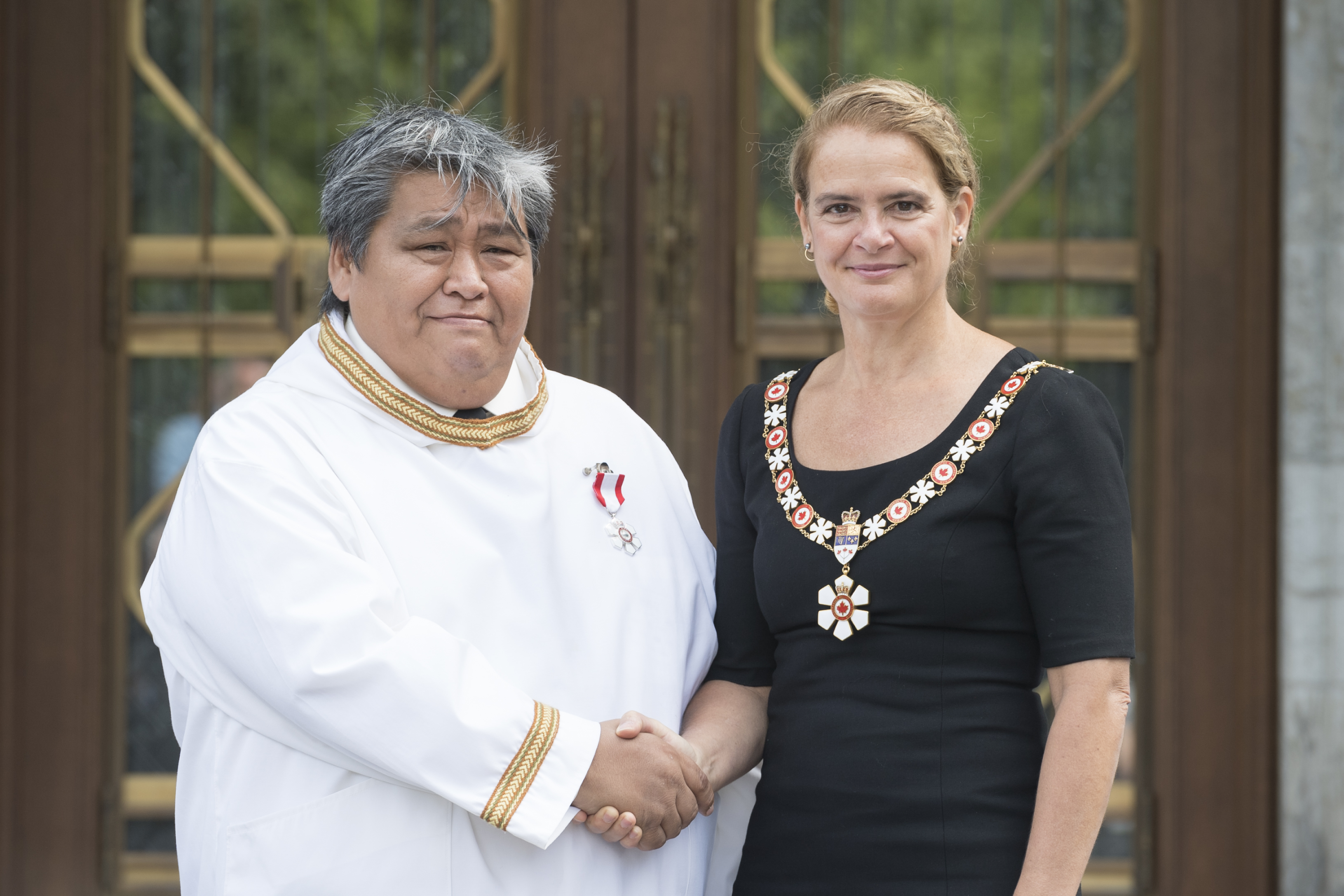 Andrew Qappik of Pangnirtung stands with Governor General Julie Payette at Rideau Hall (Ottawa) during his investiture into the Order of Canada (PHOTO BY SGT JOHANIE MAHEU, RIDEAU HALL © OSGG, 2018).

In 1998, one year before Nunavut officially became a territory, Qappik’s inukshuk design for the Nunavut flag was selected by the Canadian Heraldic Authority, and he was invited to advise on the design of the Nunavut flag and coat of arms in Ottawa. Qappik’s drawing of a polar bear was chosen in 2000 as the logo for the Government of Nunavut, and he received the Queen Elizabeth Jubilee Medal in 2003. That same year, he became a member of the Royal Canadian Academy of Arts. Two years later, the short film, I Can Make Art Like Andrew Qappik, was produced by the National Film Board of Canada (NFB) to teach children the stenciling process.

Qappik was selected in 2017 to become a Member of the Order of Canada “for his contributions to defining the visual culture of Nunavut as a master printmaker and sculptor.” He invested into the Order of Canada by Governor General Julie Payette on 6 September 2018.

In 2018, Qappik was commissioned by the Royal Canadian Mint to design Nunavut’s 20th anniversary gold coin. He was chosen by the Mint because he had already designed two limited edition, 25-cent coins in 2017, that featured a fox and hare surrounded by a walrus, lemming, falcon and fish.