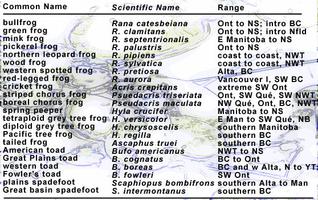 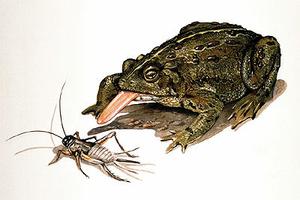 One of four species of toad found in Canada (artwork by Jan Sovak, 1989).
PreviousNext

Amphibians are members of a group of tetrapod (4-legged) vertebrate animals derived from fishes, and are the common ancestor to mammals and reptiles. The eggs of amphibians lack the extra embryonic membrane. Amphibians are represented by 3 living groups: Anura (frogs), Caudata (salamanders) and Gymnophiona (caecilians, tropical, none in Canada).

Amphibians are tetrapod or, in the case of some limbless salamanders and caecilians, derived from tetrapod ancestors. They have a moist, glandular skin without epidermal scales, feathers or hair. Frogs lack a true tail as adults and have disproportionately long hind legs and exaggerated mouths. Most salamanders have a more typical vertebrate body, with elongated bodies and tail and relatively equal-sized front and hind legs. Although easily identified by their lack of scales, salamanders are sometimes mistaken for lizards, which they resemble in body form. All frogs and most salamanders have 4 toes on the forefeet, 5 on the hind feet; some salamanders have fewer toes (4 on the hind feet in four-toed salamanders and the mudpuppy in Canada) or lack limbs entirely (some species beyond Canada). Caecilians are limbless and have little or no tail. They usually have folds or grooves, which give the body a segmented, wormlike appearance.

Modern amphibians are small: the largest salamanders attain 160 cm; caecilians, 120 cm; and frogs, 30 cm. Typically, living amphibians have 2 lungs, although the left lung is reduced in caecilians and members of one salamander family (Plethodontidae) are lungless. The heart has 2 atria and one (sometimes partly divided) ventricle. Poison glands are often abundant in the skin; the poison is distasteful but rarely fatal to predators.

Eggs are fertilized externally in most frogs; most salamanders deposit small packets of sperm, which are taken up by the female through her vent and held for internal fertilization. Most amphibians deposit eggs in water or in moist, terrestrial sites; eggs are rarely retained in the female until hatching. Most terrestrial eggs hatch only after the larval stage has been passed within them, but the typical amphibian life history features a gill-breathing, aquatic larva metamorphosing into the lung-breathing adult. Hence, the name of the group [Gk amphi, "both"; bios "life"].

Striking differences in larval development between groups show their long, divergent evolution. Larval salamanders have forelegs appearing first, hind ones later, and are similar to adults in form and in being carnivorous. Some salamanders remain aquatic, retaining gills throughout their lives.

Frog metamorphosis, from aquatic larva to terrestrial adult, is more dramatic. Larval frogs hatch with external gills and without legs. The tadpole intestine is long and coiled. The gills soon become internal; the body becomes globular, with no discernible neck; a small mouth with rasping teeth and beak appears for grazing on vegetation. Later hind legs appear as buds and complete their development externally by the time the forelegs, developed internally, push through the body wall; the intestine shortens for a carnivorous diet; the tadpole teeth and beak are lost; the mouth divides; gills and tail are absorbed. The mouth enlarges for gulping whole animals and the lungs take over respiration.

Amphibians are ectothermic, ie, have a relatively low metabolic rate insufficient to generate enough heat for life processes and thus depend on heat from the environment. Amphibians often function better at lower temperatures than do most reptiles, but are more vulnerable to desiccation throughout their life cycle. Their eggs lack both protective shell and embryonic membranes, being covered only by a layer of jelly. Amphibians breathe, as larvae and adults, through their skin as well as their lungs and must keep moist. They are very adaptable, being able to withstand surrounding temperatures several degrees below water freezing by flooding cells with cryoprotectants (eg, wood frog, spring peeper and chorus frog use glucose; grey treefrog uses glycogen) and to survive losing nearly half their body weight in moisture (eg, spadefoot toads).

Amphibians have lost much of their ancestral diversity and size and have survived by accepting a small predator's role, largely in moist or aquatic habitats. Only frog tadpoles are plant eaters but some of these may be carnivorous; all salamander larvae and adults in both groups are carnivorous. There are over 5000 species of "frogs" (including toads, etc), and they occur on all major landmasses except Greenland and Antarctica. There are about 500 species of salamanders, largely restricted to the north temperate zone, are most diverse in Eurasia and North America, but one family (Plethodontidae) has successfully invaded the tropics of Central and South America and radiated into many species there. Caecilians number about 170 species, all entirely tropical. The total of amphibian species is constantly being revised upward, partly because herpetologists are collecting more from remote regions and more difficult to sample habitats, and partly through DNA analysis.

Canada has 46 species of native amphibians: 25 frogs and 21 salamanders. None are unique to Canada and most have more extensive ranges in the US. None occur in the northern tundra, but several are abundant in the boreal forest. The deciduous forests of southwestern Ontario, the coastal rain forest and interior valley grasslands of British Columbia and the central plains of Saskatchewan and Alberta contain many species that barely range into Canada. No amphibians survived glaciation in Canada; therefore, all this fauna has spread from southern refugia and have been in Canada less than 18 000 years.

Amphibians are of minimal direct economic importance. Some frogs are caught for food, particularly the bullfrog native to southern parts of eastern Canada and introduced in British Columbia. Small frogs are used for fishing bait. Bullfrogs, leopard frogs and mudpuppies are used in university and high-school dissection and experimental physiology. Amphibians are a vital part of the ecosystem, forming a significant part of the terrestrial, aquatic and semiaquatic biomass and acting as a biological control on invertebrate members. They are widely used to monitor the possible environment for affects of acid rain, global warming, ultraviolet light and widespread parasite and fungal infections. Drastic population reductions and some extinctions have been widely studied throughout the world.