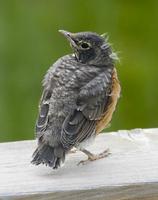 Fledgling robin's first day out of the nest (photo by James Marsh). 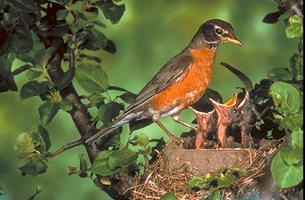 The female robin incubates 4 bluish-green eggs for 12-13 days and the male assists with the feeding (Corel Professional Photos).
PreviousNext

The American robin (Turdus migratorius) is the largest and best-known member of the thrush family in Canada. The term robin also applies to several other thrushes not closely related to the American robin and to birds of other families.

The robin is widely distributed in Canada, the northern limit of its range being the treeling. It is migratory in most parts but may winter or attempt to winter in southern parts of most provinces. It has adapted to humans in inhabited areas and is relatively tame; in remote areas, it avoids them.

The American robin is a graceful, primarily terrestrial bird with a black head, black and white streaks on the throat, grey back, blackish tail and wings, reddish orange breast, and white abdomen. Sexes differ little in size (22-28 cm long). Males are more brightly coloured than females. Young have the same general appearance as adults but, like all thrushes, are heavily marked with conspicuous dark spots on underparts. The American robin is a good singer.

Nests are usually built a few metres from the ground in trees or bushes. The nest is a large structure of grass, twigs and small stems, crudely assembled around a cup of mud lined with finer grasses. The female incubates 4 bluish green eggs for 12-13 days; the male assists with feeding the young. Robins frequently have 2 broods in southern parts of Canadian range. They have many natural enemies, such as birds, snakes, predatory mammals (eg, domestic cats).

Robins feed extensively on insects, insect larvae and earthworms but also consume fruits and berries in season and are considered pests in many areas.