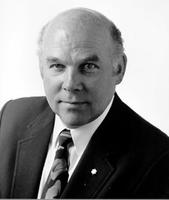 Allan James Monk, OC, baritone (born 19 August 1942 in Mission, BC). Allan Monk is a lyric baritone acclaimed for the versatility and clarity of his voice, and his characterization and resourcefulness as an actor in opera. He performed for many years with the Metropolitan Opera and has portrayed both leading and supporting characters in an award-winning career that has spanned five decades in Canada, the US and Europe. He is an Officer of the Order of Canada and a recipient of the Golden Jubilee Medal.

Monk grew up in Burnaby, BC where his parents were members of a musical group called the Clef Society. When he was young, he won $50 in a talent contest singing an aria from Verdi’s La Traviata. In 1957, Monk moved with his family to Calgary, where he began voice studies with Elgar Higgin. He spent summers studying music and drama at the Banff School of Fine Arts (now Banff Centre for the Arts) and was a member of the Calgary Theatre Singers, where he played leading roles in productions of Carousel, Oklahoma!, Annie Get Your Gun and Guys and Dolls. Monk’s voice attracted notice in the US at Boris Goldovsky’s summer workshops, which he attended in 1963, 1964 and 1966.

First Operatic Roles in the US

Monk was engaged for his first leading roles, including Figaro in the San Francisco Western Opera Theatre’s production of The Barber of Seville in 1967. He spent 1969-74 with the San Francisco Opera, singing principal roles with the touring company and small roles with the main stage company. In 1971, he was named an Outstanding Young Artist of the Year by the performing arts and classical music journal, Musical America. He experienced something of a breakthrough in 1973, when he sang Enrico in Lucia di Lammermoor, Donner in Das Rheingold, the High Priest in L’Africaine and the Teacher in von Einem’s The Visit of the Old Lady.

At the Guelph Spring Festival, he sang the role of Noye in Noye’s Fludde (1972), John Sorel in The Consul (1973) and Tarquinius in The Rape of Lucretia (1974). In 1973, Monk originated the role of Abelard for the Canadian Opera Company (COC) in Charles Wilson’s Heloise and Abelard. He continued to perform regularly with the COC, singing the title roles in Wozzeck, Macbeth and Rigoletto, and many other leading baritone roles. In 1974, he sang Escamillo in Carmen for the COC, the Southern Alberta Opera and the Edmonton Opera.

In March 1976, Monk moved to Teaneck, NJ, and began performing with the Metropolitan Opera in New York, making his debut in March that year as Schaunard in La Bohème. The following year he sang Kothner in Die Meistersinger, Roucher in Andrea Chénier, the King’s Herald in Lohengrin and Angelotti in Tosca. He established himself as a versatile singer and a resourceful actor in this variety of supporting roles.

In 1978 he appeared as the Father in Hansel and Gretel, the Speaker in Die Zauberflöte, Sharpless in Madama Butterfly and Wolfram in Tannhäuser. Other roles he sang for the Metropolitan Opera included Rodrigo in Don Carlo, Ford in Falstaff and Schaunard in Franco Zefferelli’s 1981 production of La Bohème.

In 1980, Monk made his European debut singing the title role in Wozzeck in Lisbon, Portugal. In 1983, he portrayed Baron Douphol in Zeffirelli’s film version of La Traviata, and was named Artist of the Year by the Canadian Music Council.

He played the role of Scarpia in productions of Tosca by the Calgary Opera (1998) and Opera Ontario (1998), sang Bartolo in The Barber of Seville with Opera Lyra Ottawa (1998), and Amonasro in the Calgary Opera’s production of Aida in 2000. Monk has also appeared with opera companies in Pittsburgh, Colorado, Philadelphia and Portland.

Teaching and Return to Calgary

In 1997, Monk was Visiting Professor at the Eastman School of Music in Rochester, NY. Returning to Calgary, he opened a private singing studio and continued to give occasional master classes. He spoke on opera at music clubs, served on the board of directors of the Calgary Opera, and performed in local events, notably with the Calgary Philharmonic.