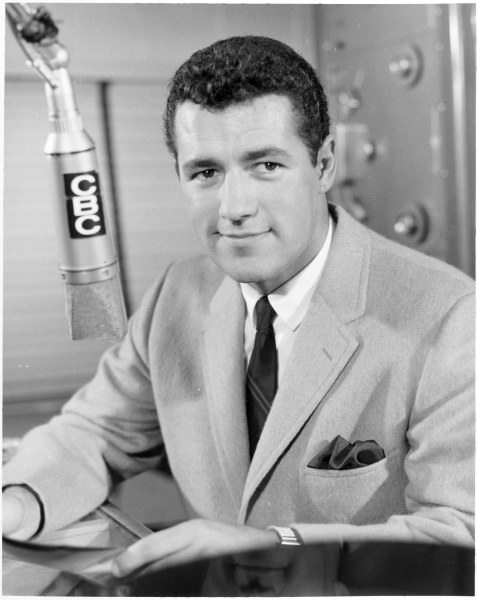 The son of a French Canadian mother and a Ukrainian immigrant father who worked as a hotel chef, Alex Trebek attended Jesuit schools until the age of 12. He then went to boarding school at the Oblates of Mary Immaculate in Ottawa. Fluent in both English and French, he studied philosophy at the University of Ottawa, working part-time at CBC Radio to help pay his tuition.

Upon graduating with a Bachelor of Arts in 1961, Trebek accepted a full-time position as a staff announcer at the CBC in Ottawa, providing news, weather and sports reports on the regional radio and television broadcasts. He then transferred to Toronto and worked as a national staff announcer. Noted for his poise, composure and improvisational skills, he began hosting a wide range of programs and special events, including Music Hop (1963–64), the country’s first live teen music show; and Reach for the Top (1966–73), a highly popular quiz show that tested bright high school students on their knowledge of geography, history and politics.

In 1984, Trebek became the host of Jeopardy!, a trivia game show that had been syndicated throughout North America since 1964. The show's unique format — contestants are presented general trivia in the form of clues framed as answers and must phrase their responses as questions — delighted mainstream audiences. It was watched by 15 to 20 million people five nights a week during its peak popularity.

Trebek was also the producer of Jeopardy! from 1984 to 1987 and is credited with devising separate tournaments for different age and skill levels (teens, college students, celebrities, etc.). Concurrent to Jeopardy!, he hosted three seasons of the NBC game show Classic Concentration (1988–91). In 1991, he became the first person to host three American game shows at the same time when he hosted the second half of the last season of NBC’s To Tell the Truth.

Trebek co-authored The Jeopardy! Book: The Answers, the Questions, the Facts and the Stories of the Greatest Game Show in History (1990). In June 2014, he set a Guinness World Record title for hosting 6,829 episodes of Jeopardy! — the most game shows hosted by the same presenter, surpassing the previous record holder, Bob Barker of The Price is Right (1972–2013).

Trebek’s persona has also been parodied by Eugene Levy on CBC’s SCTV, and by Will Ferrell on NBC’s Saturday Night Live.

Trebek travelled the world and appeared in numerous television specials as a spokesperson for the relief and development organization World Vision. He adopted a village in Zambia, where he built a school, homes for teachers and a medical facility. He served on the boards of the National Geographic Society Education Foundation and the National Advisory Council for the Literary Volunteers of America. He also supported the USO and Smile Train, an organization that helps children with cleft palettes.

Trebek was married to fellow CBC personality Elaine Callei from 1974 to 1982.  He was married to Jean Currivan from 1990 until his death from pancreatic cancer in 2020. They have two children together.

Trebek became a naturalized US citizen in 1998. He caused a minor uproar among his fans when he shaved his trademark moustache in 2001, and made headlines in 2004 when he fell asleep at the wheel while driving near a Thoroughbred ranch he owned and managed in Creston, California. His truck wiped out a row of mailboxes, sailed over an embankment and landed in a ditch. He escaped without injury and was not charged or ticketed for the incident.

In July 2011, while in San Francisco to host the National Geographic World Championship, he snapped an Achilles tendon while chasing a woman who stole money from his hotel room. He suffered heart attacks in 2007 and 2012, returning to Jeopardy! each time after taking about a month off to recover. He also required surgery in 2017 to relieve blood clots on his brain after suffering a fall.

In March 2019, Trebek announced in a video posted to Jeopardy!’s YouTube page that he had been diagnosed with advanced pancreatic cancer. “Just like 50,000 other people in the United States each year, this week I was diagnosed with Stage 4 pancreatic cancer,” he said. “Now, normally the prognosis for this is not very encouraging. But I’m going to fight this and I’m going to keep working. And with the love and support of my family and friends, and with the help of your prayers also, I plan to beat the low survival rate statistics for this disease. Truth told — I have to, because under the terms of my contract, I have to host Jeopardy! for three more years.”

Trebek carried the Olympic torch in Jacksonville, Florida, prior to the 1996 Olympic Summer Games in Atlanta, Georgia. In 1998, he received the Bob Hope Entertainment Award for his work in more than a dozen tours with the USO. He has also received medals from the Royal Canadian Geographical Society (see Canadian Geographic) and the US National Geographic Society for his contribution to the study of geography as host of national geography competitions in Canada and the US.

In 2011, he was honoured at the Daytime Emmy Awards with a Lifetime Achievement Award for his long career in television. In 2013, he was ranked No. 8 in a Reader’s Digest poll of the 100 most trusted people in America. He was made an Officer of the Order of Canada in 2017 for instilling “a love of learning in millions of people around the world” and for his commitment “to multiple educational, environmental and humanitarian causes.”