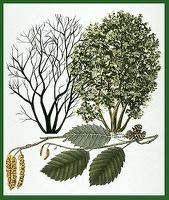 Alder, tree or shrub of genus Alnus of birch family. The 30 known species are found mainly in the northern hemisphere; 3 are native to Canada. Speckled alder (A. rugosa) is a transcontinental shrub and the most common Canadian alder. Red alder (A. rubra) is a small, short-lived tree of western BC and green alder (A. crispa) is a transcontinental northern shrub. The Sitka alder (A. crispa ssp. sinuata) is found in BC mountains, and is considered by some to be a distinct species (A. sinuata).

Healers, artisans and warriors used alders. The bark has been used as a throat medicine, the wood for cabinets and for bridge foundations because of endurance under water, and the charcoal as a constituent of gunpowder.