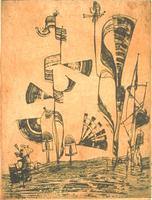 Albert Dumouchel, printmaker, teacher (b at Bellerive, Qué 15 Apr 1916; d at Montréal 11 Jan 1971). He studied etching and lithography in Paris. In Montréal in 1945, he participated in the "cadavres exquis" experiments with Léon Bellefleur, Jean Benôit, Jean Léonard, Mimi Parent and Alfred Pellan, and, in 1947 and 1949, published 2 famous issues of Les Ateliers d'arts graphiques, the review of Montréal's École des arts graphiques. In 1948 he joined the free-art "Prisme d'yeux" group and later made contributions to the first publications of Roland Giguere's Éditions Erta. Between 1949 and 1954, his lithographs illustrated Giguère's Faire naître, Les Nuits abat-jour and Les Armes blanches. Giguère interested Dumouchel in the Cobra movement, and his work appeared in the Revue internationale de l'art expérimental - Cobra (1954), and in Phases de l'art contemporain (1955), the review published by poet and surrealist critic Édouard Jaguer. His work as an art teacher at the École des arts graphiques and the École des beaux-arts in Montréal until his death influenced several generations of artists. The Montréal Musée d'art contemporain held an exhibition of his engravings in 1974.