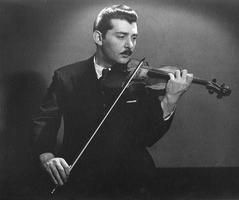 Adolph Koldofsky. Violinist, born London 13 Sep 1905, died Los Angeles 8 Apr 1951. The son of Russian-Jewish parents, Koldofsky came to Canada in 1910 but later returned to Europe for advanced violin studies with Ysaÿe and Ševčík. He also toured Czechoslovakia as leader of the Ševčík String Quartet. He played in the Toronto Symphony Orchestra intermittently 1923-38, and was second violin 1938-42 of the Hart House String Quartet. He gave recitals with his wife, the pianist Gwendolyn Williams Koldofsky, and appeared as soloist with orchestras. He undertook extensive research to authenticate manuscripts of C.P.E. Bach keyboard concertos that had turned up in the estate of an old Toronto family and in March and April 1943 conducted a series of seven CBC radio broadcasts in which Wanda Landowska gave the modern premieres of five of the concertos. (Later transferred to CD). The manuscripts were deposited later in the library of the University of California at Berkeley.

In 1944 Koldofsky became concertmaster of the Vancouver Symphony Orchestra and conductor of the Junior Symphony. In 1945 he moved to Los Angeles, where he played in the RKO studio and in chamber music recitals and established a local chapter of the International Society for Contemporary Music. He premiered Schoenberg's last two instrumental works, the String Trio, Opus 45 and the Fantasy, Opus 47 which was written for him. A scholarship fund was set up in his memory at the University of Southern California, which became the Gwendolyn and Adolph Koldofsky Memorial Scholarship after the death of his wife. His sister is Eleanor Koldofsky.