Acadia University is located in Wolfville, NS. In 1828, the Baptist Education Society of Nova Scotia founded Horton Academy in Horton [Wolfville], NS. Ten years later in 1838, the Baptists established Queen's College, sharing the Horton facilities. Contrary to prevailing practices, no religious tests were imposed on either faculty or students. The colonial government chartered the new institution, but reluctantly, since it felt there were already more colleges than it could support. Even the name raised objections, as Queen Victoria declined having a Dissenters' college named after her. "Acadia College" finally received its charter in 1841, and became Acadia University in 1891. Classes began in early 1839 and a first class of 4 graduated in 1843.

A theology department was soon added, although Acadia continued to emphasize liberal arts. The Associated Alumni of Acadia College, established in 1860, provided crucial early financial support. Still very active, it is one of the oldest alumni organizations in Canada. In the 1860s a Ladies' Seminary was established; by 1880 women were attending college classes, although informally. In 1884 Acadia's first woman graduate received her degree.

Other areas of concentration have been added to the liberal arts program. Acadia now has faculties of arts, pure and applied science, professional studies and the Acadia Divinity College, all of which offer a wide variety of degrees, diplomas and certificates.

Noted alumni include Charles Tupper and Lillian Chase, who assisted with the discovery of Insulin; Charles Huggins, winner of the 1966 Nobel Prize in Physiology and Medicine; Milton Gregg, winner of the Victoria Cross in the First World War; and Dale Frail, astronomer and discoverer of a new planet outside solar system. In 1966 the Baptists relinquished control, although they retain a strong presence on the board of governors. The affiliated Divinity College, established in 1968, serves that denomination's theological needs. Acadia's motto is "In Pulvere Vinces" (latin - "In dust you will win"). Its colours are garnet and blue 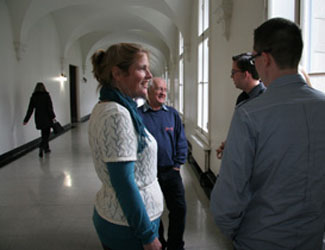