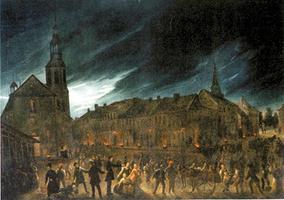 These organisms usually occur in water contaminated with sewage (eg, especially bird and mammal excrement) or by infected persons or animals. Intoxications may be chemical in nature (eg, copper, lead, insecticide poisonings) and usually occur as a result of metal leaching into water (from pipes or containers) and through the accidental spillage or seepage of chemicals into water supplies. They can also occur through toxins produced by blue-green algae (cyanobacteria), eg, Anabaena, Microcystis or Oscillatoria. These organisms have caused animal deaths in Canada through drinking pond water, but unlike Australia, there have been no known water-borne diseases from algae toxins. The illnesses can either be acute or chronic, depending on the contaminating conditions and the volume of water consumed. Illnesses acquired through contact with water are caused by bacteria, eg, Leptospira (causing leptospirosis), Chlamydia (swimming-pool conjunctivitis) and parasites, eg, Schistosoma (causing swimmer's itch and bilharziasis).

Factors contributing to water-borne outbreaks include use of untreated water, flooding of water supplies, contamination of wells through rock or soil from an unpotable water source, cross-connections between treated water and sewage, overwhelming of the treatment system during the spring runoff or heavy rain, drop in water pressure due to pipe breaks or irrigation use, and consumption of ice handled by infectious persons. Most illnesses can be avoided, however, if there is sufficient contact time during chlorination, and if there is an adequate filtration system. Communities that claim not to be able to afford proper filtration can expect to experience periodic episodes of parasitic infections, such as cryptosporidiosis.

With increasing water pollution in Canada, recreational waters are also at risk for transmitting disease. Concern about water pollution (whether the result of toxic chemicals or fecal material) is increasing in Canada. For example, swimming beaches in major cities are often closed because of high fecal coliform bacteria counts and risk of infection through water-contact diseases, including those of the eye, ear and nose.