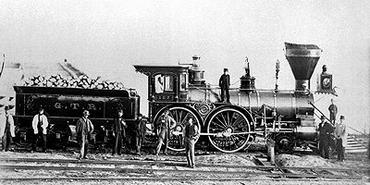 Grand Trunk Railway, in an albumen print circa 1860 (courtesy NGC).

A locomotive is a self-propelled vehicle which hauls nonpowered vehicles on railway track. The first locomotive used in Canada was the Dorchester, built by Robert Stephenson and Co in England (1835). It ran between La Prairie and St-Jean, Qué, on Canada's first railway, the Champlain and Saint Lawrence (1836). It had a 0-4-0 wheel arrangement (no front truck, no rear truck, 4 main wheels) with 1.2 m diameter driving wheels. In working order it weighed 5½ t and ran at an average speed of 23 km/h.

The first locomotive to be constructed in Canada was built by the James Good family (1853) of Toronto. Named Toronto, the locomotive had a set of 4 driving wheels and 4 small front wheels for better travel through curves. This wheel configuration, 4-4-0, was referred to as the American type and was the predominant style of locomotive during the 1850-90 period. By 1887 the Canadian Pacific Railway owned nearly 400 of these locomotives.

The Pacific locomotive was introduced in Canada in 1905 to provide faster service for passenger trains. This locomotive had larger cylinders than the American, greater boiler capacity and tremendous hauling power. During the first part of the 20th century locomotives continued to grow in size and power output.

Until the end of WWII diesel locomotives in use in Canada were low-horsepower switching engines. After the war, railways began to use diesel-electric locomotives for main-line freight and passenger service. By 1960 both CN and CP railways had stopped using steam locomotives in regularly scheduled trains.

The diesel-electric locomotive uses a diesel engine to power an electric generator. The generator provides electrical energy to drive the motors on each locomotive axle. Diesel-electric locomotives are more economical to operate than steam locomotives. They have higher fuel efficiency, lower maintenance requirements and fewer breakdowns. Several units can be coupled for long trains, requiring only one engineer to operate all of them. Today most freight trains are hauled by units of approximately 220 kW (3000 hp) with 4 or 6 axles. Locomotives for passenger trains have higher gearing which gives them a higher normal operating speed.

Electric locomotives have the ability to withstand overload power levels for short periods, making them well suited to mountainous regions where steep grades and heavy trains predominate. Their fast acceleration makes them preferable for passenger service. They have 2 major disadvantages: they can run only where overhead wire (catenary) for electric power has been installed; and they and their power supply equipment are expensive and thus economical only in regions of heavy traffic.

Rolling stock consists of nonpowered railway cars for the transport of freight and passengers. On the earliest railways, passenger cars were merely modified stagecoaches. Freight cars were of 2 basic types: open-deck flatcars and enclosed boxcars. Until 1910 most rolling stock was constructed of wood on iron or steel frames. Today, freight and passenger cars are constructed of steel and aluminum.

Modern freight cars are capable of carrying up to 100 t of freight. Freight cars are of a wide variety: boxcars for general merchandise; tank cars for liquids; refrigerator cars for perishable goods; hoppers and covered hoppers for bulk commodities; flatcars for large machinery, containers and highway trailers; tri-level automobile carriers; plus various special-purpose freight cars. The caboose, the last car in the freight train, provides office space for the train crew as well as a position from which to observe the train.

The passenger coach is the standard piece of railway passenger rolling stock, seating usually 60 to 90 people. Commuter cars used in short runs have higher-density seating. Club cars are the premium of passenger rolling stock, providing more room per passenger as well as an attendant for service. For long-distance rail travel, sleeping cars provide berths and small rooms for overnight accommodation. On-board meals are provided in a dining car, and at the seat in club cars.

Future designs of locomotives will be influenced by fuel economics. Diesel-electric locomotives will probably be made more fuel-efficient. Electric locomotives may be placed in service as the price of diesel fuel increases. Research is being carried out on the use of coal as a fuel in diesel locomotives. For passenger service, higher-speed trains will be placed in service, perhaps in advanced electric or magnetically levitated and propelled trains. Freight cars will become more lightweight in construction. Containerization of cargo will increase the ability to transfer freight between the various transportation modes. Highway tractor-trailers with railway wheels for train service will reduce the need for flatcars and hence reduce train weight.