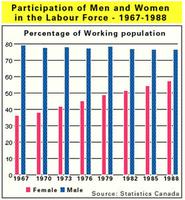 The labour force refers to the total adult population available to the labour market at a specific time; defined by Statistics Canada as "that portion of the civilian noninstitutional population 15 years of age and over who, during the reference week [in which the employment survey was taken], were employed or unemployed." Employed persons include all those who worked, part or full time, and those who would have been at work were it not for illness, disability, family responsibilities, bad weather, labour disputes or vacations. The unemployed include those without work but seeking work, those available for work but not looking for work because they were on temporary layoff and expected to return to the job from which they were laid off, those laid off for less than 6 months but available for work or those who have not sought work in the previous 4 weeks but have a job to go to within 4 weeks.

This definition is a technical one for gathering statistical data and has been refined and modified over the years both for operational reasons and to reflect social and economic changes. For instance, earlier in this century the labour force was considered those 10 years of age and over. This changed to 14 years in 1941 and 15 years in 1961, reflecting the decline of an agriculturally based economy.