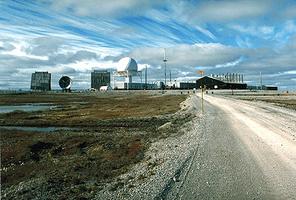 Defence research, initiation and development of weapons or technologies likely to be useful in national defence, is a comparatively recent phenomenon in Canada. Although there were some rudimentary efforts at developing new defence technologies during the First World War, it was only with the Second World War that the Canadian government began to pay attention to innovations in equipment and techniques. Various research establishments were set up to investigate problems as diverse as ordnance, ballistics, radar, winter warfare, chemical warfare and aviation medicine.

At the end of the war, senior Canadian defence and government officials such as C.D. Howe, C.J. Mackenzie, and Chief of the General Staff Lieutenant-General Charles Foulkes were concerned about the future technical and scientific needs of the Canadian Forces. Canada's defence research programs were consolidated and preserved as much as limited funds would allow. It was obvious that certain limitations existed: only a few projects could be pursued at any time; research had to be co-ordinated with that of Canada's principal allies, Britain and the US; and the research program had to be integrated as far as possible into other research enterprises.

The NRC wished to divest itself of most of its military work, and the organization had come under scrutiny after the defection of Soviet cipher clerk Igor Gouzenko, who revealed that Soviet spies had infiltrated key areas of the NRC, including those dealing with atomic weapons and energy. There was a clear need for a new organization. As such, the Canadian government agreed to a modest amount of state building in the wake of the post-war demilitarization efforts.

The best means of securing a relatively independent and prestigious research enterprise was to set up a Defence Research Board (DRB), a centralized body that served the defence research needs of all three services, under the Department of National Defence (DND). It was housed within DND and headed by a Director-General who also served as Chairman of the policy-making Board itself. It was largely the brainchild of Army staff officer and economist Colonel Wally Goforth and a small team of staff officers, though Foulkes supported the concept.

The first Chairman was acclaimed Canadian scientist and science manager Dr. Omond Solandt, whose service in Britain during the war had made him an ideal candidate: he was a pioneer in operational research, science management, and atomic warfare. As Chairman, Solandt was Canada's senior defence science advisor to the government, the executive of a large and multifaceted defence research establishment; he served on the Chiefs of Staff Committee with the equivalent rank of Lieutenant-General. The DRB became a part of DND in 1947. Neither the US nor Britain created such a new, intriguing, and forward-looking organization. The formal Board of the DRB comprised the Chairman, the Chiefs of Staff, the President of the National Research Council, senior ministers and deputy ministers, as well as representatives of both industry and academia. In addition to members and staff of the Board in Canada, liaison officers were appointed to work in London and Washington, and later also in Paris.

DRB's main focus was on niche fields where Canada either had expertise and experience (arctic research, ballistics, and chemical and biological warfare defence), an interest in mastering (aeronautics, computer science, and electronics), or the means to make contributions (atomic research). The DBR conducted research in two ways: through research done at its many establishments; and through the use of grants with academia and industry to conduct research on DRB's behalf. Liaison and close cooperation was maintained with Canada's senior allies, the United States and Great Britain. DRB also maintained operational research teams that were seconded to each of the senior services on research ranging from food production to continental defence and nuclear war gaming.

Among DRB's many accomplishments were the development of Canada's first and only air-to-air missile VELVET GLOVE, advance field testing of biological and chemical warfare defence assets, the Heller anti-tank rocket, and electronics and engineering research into continental defence leading to the creation of the McGill Fence defence RADAR system. In co-operation with the navy the DRB developed new antisubmarine technologies such as the Variable Depth sonar and helped to adapt helicopters for antisubmarine work. The DRB also contributed heavily to locating and developing the Early-Warning Radar of the 1950s across the Canadian North (seeNORAD). They also made contributions to service-led research in areas such as DATAR (Digital Automated Tracking and Resolving), and pushed to have the army send a small OR team to Korea. However, DRB's most famous research projects came to fruition in the 1960s with the development of Canada's first satellites, Alouette I and II. The satellite program was in part borne out of the propulsion work done at the Canadian Armament Research and Development Establishment (CARDE) during the post-war period.

The DRB was not free from controversy. During the Korean War, some American and British POWs were returned after being "brainwashed" by the North Koreans and their Chinese and Russian allies. As a result, medical and scientific research on brainwashing and defence against its use was undertaken by Britain, Canada and the US. The DRB funded limited efforts on research by Dr. Donald Hebb on sensory deprivation, all with the consent of the subjects. However, the most damning Canadian research was done by Dr. Ewen Cameron at the Montreal Allan Memorial Institute, where patients underwent unethical and controversial treatments including sleep deprivation, electroshock, and the use of LSD. Cameron's research was secretly funded by the CIA. Solandt, who was not an admirer of Cameron, denied most of Cameron's attempts to secure DRB funds for any of his research, and was called to testify on behalf of Cameron's victims when they sued the CIA in the late 1980s. The case was settled out of court.

DRB was also caught up in the UFO hysteria of the 1950s, when people in North Bay, Ontario claimed to see "flying saucers." DRB did conduct some research into these sightings, and even supported research by some radical scientists who believed in UFOs, but the sightings and the research came to nothing, though conspiracy theorists continue to find DRB's limited involvement in "flying saucers" interesting.

DRB maintained close cooperation with the US and Britain through "tripartite" relations, sharing information to gain access to the research in London or Washington. The most famous case of this was DRB's ability to create excellent filters for collecting atomic debris. After the RCAF collected the samples, the filters were sent to Dr. Harry Thode of McMaster University. Thode had made his own mass spectrometer with the help of DRB funds, and used it to determine that the samples the RCAF provided indicated the Soviets were exploding hydrogen weapons. Such data helped earn DRB's seat at the table with senior allies.

Solandt retired from the Board in 1956, and was replaced by Mr. Hartley Zimmerman, followed by Dr. Bob Uffen, and Dr. L.J. L'Heureux.

The DRB maintained its essential structure and approach to defence research until the late 1960s and early 1970s when the Glassco Commission divested it of its contracting authority and executive powers and focus. In 1974 it was restructured and renamed Defence Research and Development Branch, and structural changes continued until 2000 when it was renamed Defence Research and Development Canada (DRDC).

At the Suffield Experimental Station at Ralston, Alberta, chemical work has been carried on since the Second World War. Included in the Suffield branch's research areas are casualty management; countermine technology; chemical-biological (CB) agents; physical protection and medical countermeasures against CB agents; and robotics.

CSS operates jointly with Public Safety Canada, providing science and technology services and support in the areas of national public safety and security objectives. The centre is responsible for leading and administering research, development, testing and evaluation of technologies, identifying trends and future threats.

More broadly, Canadian defence research has developed ground-breaking defence technologies, including the Canadian Integrated Biological Detection System (CIBADS), a world first in detecting airborne biochemical agents; Simulation and Modelling for Acquisition, Requirements, Rehearsal and Training (SMARRT), work that has established DRDC as an expert in advancing research simulating future military scenarios to assess their technical feasibility and human-machine interactions and to develop and refine future requirements; and information systems for urban operations, a 3-D modelling and viewing system focusing on situational awareness and requirements connected with conducting operations in urban environments. DRDC is establishing the Counter Terrorism Technology Centre (CTTC) to train first responders across Canada in case of a biological or chemical event.