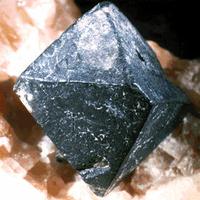 Uraninite, one of the minerals from which uranium is extracted. From Payne Mine, Gatineau, Québec (courtesy NMNS).

Uranium (U) is the heaviest naturally occurring element. It is a hard, dense, malleable, silver-white metal which never occurs in nature in its metallic state but always in combination with oxygen, as oxides or silicates. It is one of the more common elements in the Earth's crust, less abundant than copper, nickel or zinc, but 500 times more abundant than gold. It can be found in trace amounts virtually everywhere; in the oceans, in streams and ground water, in most soils and rocks, and even in foods and human tissue. Its radioactive properties make uranium most useful to humankind.

Uranium oxide was first identified in 1789 by M.H. Klaproth in the mineral pitchblende, but its distinctive property of radioactivity was discovered much later (1896) by Henri Becquerel. The subsequent discovery in 1898 of the elements polonium and radium led to the development of the radium industry, in which Canada played an important part. Uranium was recovered as a byproduct of radium until 1939 but found little use except as a ceramic colouring agent. Important developments in nuclear physics led to the realization that uranium atoms could be split to release large amounts of energy. It was soon recognized that this energy could be harnessed to produce electric power and nuclear weapons. Canada, like many other countries, meets part of its electricity needs with nuclear energy. The electricity is generated using Canadian-built CANDU reactors, fuelled in large measure by Canadian uranium.

Uranium was first discovered in Canada in the mid-1800s on the north shore of Lake Superior. However, Canada's first economic uranium discovery is attributed to Gilbert Labine, who in 1930 identified the Port Radium deposit at Great Bear Lake, NWT, exploited initially for its radium content. Important discoveries were subsequently made in the Uranium City area of northern Saskatchewan (late 1940s) and, more significantly, in the Elliot Lake area of northern Ontario (early 1950s). Credit for the latter goes to geologist Franc Joubin, who was backed by financier J.H. Hirshhorn. Until the early 1980s, most of Canada's uranium production came from the Uranium City and Elliot Lake camps.

Beginning in the early 1970s, the focus of Canada's uranium exploration effort turned to the Athabasca Basin area of northern Saskatchewan, where several important, relatively rich deposits have been discovered. A number of these were developed and brought into production during the 1980s and early 1990s, while even higher-grade uranium deposits there are proceeding through the environmental assessment and review process toward full production early in the 21st century. All of Canada's uranium is mined in Saskatchewan by companies like Cameco Corp (Rabbit Lake, McArthur River mines), Cigar Lake Mining Corp and Cogema Resources (Cluff Lake mine), all of which are headquartered in Saskatoon.

Demand for uranium began with the initiation in 1942 of an Allied nuclear-weapons program, the Manhattan Project. Major uranium-producing industries were developed in the early 1950s, principally in the US, Canada and South Africa. Peak levels of production were attained by 1959, when in Canada there were 23 uranium mines with 19 ore treatment plants, and uranium ranked fourth in value among Canada's major exports, after newsprint, wheat and lumber. Production declined precipitously during the early 1960s, and its anticipated revival, based on the demand for uranium for nuclear power generation, was slow to materialize. It was not until the mid-1970s that price levels and market activity were sufficient to prompt significant expansion of exploration and development, and by the late 1970s the industry had been firmly re-established. In the early 1980s, production levels declined again in some countries, particularly the US, in response to lower than expected increases in uranium demand. Canada is the world's largest uranium producer, contributing 26% of the world's uranium, followed by Australia, which produces 16% of the world's supply and Namibia and Niger, each of which contributes 9% of the world's supply.

In the 1980s, during a second phase of attrition and consolidation of the Western uranium industry, Canada emerged as the world's leading producer and exporter of uranium. About 78% of Canada's annual uranium production is destined for export, principally to the US, Japan and western Europe. At the end of the 1980s, the uranium industry in the West faced a major challenge as the communist system collapsed in the Soviet Union and Eastern Europe. The rigid separation between Western and East Bloc uranium industries broke down, and large production surpluses from the latter began disrupting Western markets. The disintegration of the Soviet Union in 1991 and the end of the Cold War also led to the dismantling of nuclear weapons and the use of former military uranium for civilian nuclear power generation. The US initiated a trade action while the European Union imposed less formal restraints on the use in the West of uranium from former East Bloc countries.

These measures helped to cushion the impact on Western uranium markets while East Bloc uranium producers adjusted to the market economy. The realization in 1995 that global uranium requirements were double current production levels contributed to a dramatic rise in uranium prices. The development of new low-cost mines in Saskatchewan will likely be required to maintain a global balance in uranium supply and demand in the future. These factors suggest that Canada will maintain its position as the world's leading uranium supplier for many years to come.