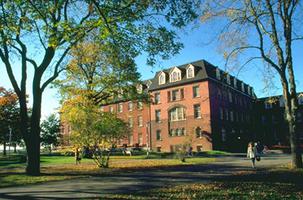 UPEI was created in 1969 by the merger of two venerable institutions established in the 19th century (photo by John Sylvester).

The University of Prince Edward Island, CHARLOTTETOWN, PEI, was established in April 1969 by the Legislature of PEI. UPEI is a public nondenominational institution created by the merger of 2 institutions, Prince of Wales College and St. Dunstan's University.

The development of post-secondary education in Prince Edward Island can be traced back to the early years of the colony. A particular champion was Lieutenant-Governor Edmund Fanning (1786-1805). Fanning actively promoted the view that education was central to the colony's progress, and that it should be seen as a priority along with the enhancement of agriculture, fisheries, commerce and population growth. In 1804, he personally donated the land on which the Prince of Wales College was to stand "for the purpose of laying the foundation of a College thereon." Kent College, later to become Prince of Wales College, opened in 1820. A related predecessor institution, Central Academy, received a Royal Charter in 1834. In 1860, the Colleges were renamed for the Prince of Wales in honour of the visit of the future King Edward VII.

St Andrew's College, the predecessor of St Dunstan's University, was founded in 1831 under the leadership of Bishop Angus MacEachern. St Dunstan's College was established in 1855 by Bishop Bernard MacDonald on a large farming property that, today, is surrounded by the expanding city of Charlottetown. This property, including the historic Main Building, serves today as the UPEI campus.

The University's campus is a reflection of the character of UPEI on many levels - a complementary blend of old and new, of tradition and innovation. It is well known for its historic architecture and for its redbrick appearance. Original St Dunstan's University buildings have been renovated to retain integrity of design while meeting modern standards, and many buildings have been integrated into the campus, including the Utilities Building (1973), Blanchard Hall (1973), the Robertson Library (1975), the Atlantic Veterinary College (1986), the Young Canada Games Sports Centre (1990), the Wanda Wyatt Dining Hall (1990), the K.C. Irving Chemistry Centre (1997) and the new Student Union Centre (2002).

UPEI has seen important developments in its programming over the past thirty years. Bachelors' programs, in many cases including "honours" options, are available in Arts, Science, Business Administration, Education, and Nursing. Co-op programs have been established in Business Administration, Computer Science, and Dietetics. The Faculty of Veterinary Medicine, and two schools, Business Administration and Nursing, were added in 1986. Masters and Doctoral degree programs were first introduced through the Atlantic Veterinary College and, beginning in 1999, a Master of Science degree was offered through the Faculty of Science. In that same year the first students were admitted to the University's new Master of Education program.

Enrolment has been fairly constant since UPEI's foundation. The comparatively small number of students and a satisfactory faculty-student ratio have enabled the university to implement its central objective, the maintenance of personal and scholarly instruction. The university has close to 2500 full-time and 500 part-time students and a 200-member faculty. Over 90% of UPEI's students come from the island.