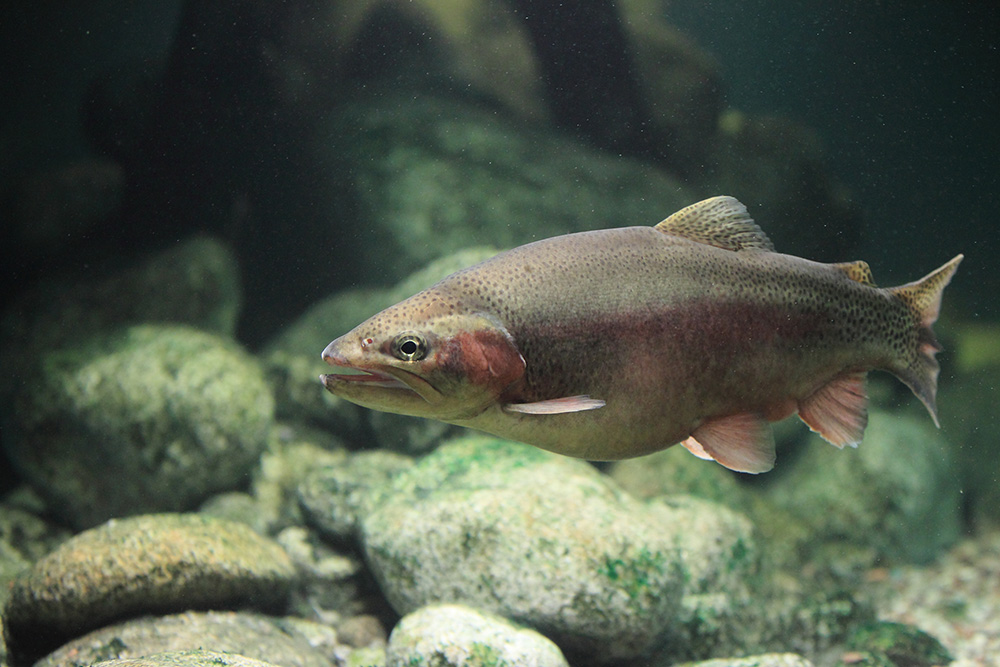 Trout is the common name given to the species of freshwater fish from 3 genera, all members of the salmon family (Salmonidae). Trouts include the brown trout (Salmo trutta) and Atlantic salmon (S. Salar). Rainbow and cutthroat trouts are placed in the genus Oncorhynchus(O. mykiss and O. clarki respectively) along with Pacific salmon. These 3 species all originated in Pacific drainages. Several chars of the genus Salvelinus are also commonly called trout, including lake trout (S. namaycush), brook or speckled trout (S. fontinalis) and bull trout (S. confluentus).

Rainbow trout is native to western North America (northern Mexico to Alaska) and has been successfully introduced worldwide in temperate and high-altitude tropical zones. Introductions were originally to create sportfishing; however, more recently aquaculture introductions are common. Cultured rainbow stocks have been held in captivity for more than 40 generations. These trout in captivity have a rapid growth rate; take well to crowding in ponds, raceways and tanks; are fairly disease resistant; and are in great public demand both for food and sport. They are a popular sport fish because of fighting and jumping characteristics and because they readily take a shallow water lure and artificial fly. Sea-run rainbow trout are called steelhead, and they are most sought after in rivers when returning to spawn. Steelhead grow up to 18 kg and are a very strong sport fish. However, at present many BC steelhead populations are dangerously depleted. There is an increasing demand for steelhead in aquaculture.

The golden trout (O. Mykiss aquabonita) is a subspecies of the rainbow trout. It is native to California and was introduced to Canada into some high-altitude lakes in southwestern Alberta.

Cutthroat trout, in Canada, is restricted to BC and southwestern Alberta. There are 2 subspecies: coastal cutthroat, with sea-run and freshwater forms, and freshwater Yellowstone or mountain cutthroat that do not go to sea. The coastal cutthroat ranges throughout coastal BC and are larger (up to 8 kg) than Yellowstone cutthroat. In Canada, Yellowstone cutthroat is restricted to southeastern BC and southwestern Alberta. Both subspecies are important sport fish, and stocking programs exist to assist in maintaining populations.

Brown trout, introduced to North America from Europe (1883), is now most common in Alberta and the 5 eastern provinces, although populations exist throughout southern Canada. It was the first salmonid species to be cultured (Germany, 1741). Brown trout has sea-run and freshwater populations and until the mid-1900s was heavily cultured and was used to stock lakes and streams. However, domestic rainbow stocks have replaced brown trout in most areas as the prime trout for sportfishing.