Trois-Rivières, Quebec, incorporated as a city in 1857, population 139,163 (2021 census), 134,413 (2016 census). The city is located at the mouth of the Saint-Maurice River, on the north shore of the St. Lawrence, midway between Quebec City and Montreal and is the regional capital of Quebec's Mauricie region. Its name derives from the 3-armed delta formed by the river's islands at its mouth.

Trois-Rivières, Quebec, incorporated as a city in 1857, population 139,163 (2021 census), 134,413 (2016 census). The city is located at the mouth of the Saint-Maurice River, on the north shore of the St. Lawrence, midway between Quebec City and Montreal and is the regional capital of Quebec's Mauricie region. Its name derives from the 3-armed delta formed by the river's islands at its mouth.

The fortified settlement built at Samuel de Champlain's request in 1634 replaced the stockade abandoned earlier by the Algonquin, who had likely fled the hostile Haudenosaunee at the turn of the century. The former, who were allies of the French, lived for a long time in or near the small French village, whose major function was to organize the fur trade in the interior. Following the administrative restructuring of New France in 1663, Trois-Rivières became the seat of local government, with a gouverneur, king's lieutenant, major, court of royal jurisdiction and vicar-general. This gave the settlement an importance which exceeded that of its size. At the time of the conquest in 1760, the town had 586 inhabitants. 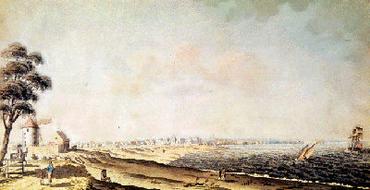 The Rivière Saint-Maurice played a major role in Trois-Rivières's history as a point of entry to the interior's natural resources. It was first used to transport furs from the northern forests. With the boom in forestry operations in the early 1850s, Trois-Rivières became an administrative centre, with several large sawmills and a major port for exporting timber. Then, with the development of hydroelectric power, the river's energy potential stimulated the development of the pulp and paper industry and made Trois-Rivières, with 4 large mills now located at the river's estuary, the world's capital for paper products around 1930. At the same time, the rapid industrialization and urbanization of the Saint-Maurice valley increased the importance of Trois-Rivières as a harbour and as an administrative and commercial centre. Since the 1970s, the industrial park of Bécancour, located across from Trois-Rivières on the south side of the St. Lawrence River, has been attracting major industries, thus ensuring the continued population growth of the area.

The gradual receding of the Champlain Sea’s shore carved a large number of sandy terraces from the east to the west, sloping down in a stair-like fashion into the river. Situated alongside the St. Lawrence River, the lands of the settlement did not extend beyond the first level up until the 20th century. The early village was concentrated around the governor's manor, the Ursuline monastery and the Récollets' church. In the mid-19th century, industry began to spring up around the town, first along the shores of the Saint-Maurice and the St. Lawrence rivers, then along the railway that skirted Trois-Rivières to the north. Commercial activities developed along 2 main roads, Forges and Notre-Dame. The latter, parallel to the St. Lawrence River, continued as the Chemin du Roi all the way to Montreal. Rue des Forges, running north to south, led to the Forges Saint-Maurice, an early iron and steelworks about 12 km to the north.

It was not until the early 20th century that working-class districts developed near the pulp and paper and textile factories. It was also then that the population moved beyond the boundaries of the early settlement to live on the first terrace. Urban expansion, obstructed in the west by Trois-Rivières-Ouest, extended to the other terraces in the north, and annexed St-Michel-des-Vieilles-Forges in 1961.

Postwar prosperity and the automobile encouraged the population to live farther from the centre. With the population spread and with the construction of shopping centres on the edge of the city, the downtown core declined commercially. Revitalization of the downtown core has taken place so the terrace alongside the river, the south end of rue des Forges, the marketplace and the adjacent streets have all become meeting places for the residents of Trois-Rivières again.

The terrible fire that ravaged Trois-Rivières in 1908 destroyed much of the old city, sparing only a dozen buildings from the French regime, among them the Ursuline monastery and the Tonnancour manor. A few beautiful early 19th-century buildings, including the old prison (1816) and the cathedral (1856), also survived. Trois-Rivières has nonetheless long been a modern city, with an avant-garde city hall (1967) and several high buildings that tower above the cathedral.

With the establishment of sawmills and the development of commercial and port activities from 1850 to 1860, the population of Trois-Rivières doubled to 9000. The population grew rapidly again in the early 20th century, with the opening of paper and textile mills and an influx of people from neighbouring parishes. It grew from 10 000 to 42 000 between 1901 and 1941. So many people moved to the suburbs and neighbouring communities during the 1960s that in 1976 the city's population began to decline. The population of Trois-Rivières has always been predominantly francophone.

In the early 1930s, the pulp and textile industries provided nearly three-quarters of the manufacturing jobs. When manufacturing became more diversified, especially into foodstuffs, clothing, metals and electrical appliances, the dominant pulp and paper and textile industries declined, and by 1961 provided slightly less than half the total manufacturing jobs. The tertiary sector grew steadily throughout the following decades, mainly through the establishment of government offices serving the regional population. The founding of Université du Québec in Trois-Rivières in 1969 has played a major role in strengthening the tertiary sector of the regional economy.

As the major route penetrating the continent, the St. Lawrence River continued to be the only link with the rest of the colony until the construction of the Chemin du Roi was completed along the north shore in 1737. By the mid-19th century, a developing road network linked Trois-Rivières to the region's new parishes. In the late 1870s, the North Shore Railway linked the city directly to Quebec City and Montreal. The port came under the control of the National Harbours Board from the private sector in 1882. Its grain silos were erected in 1936. It was not until 1967 that Trois-Rivières was linked to the south shore by the Laviolette bridge, an event which preceded the building of highways 55 (Trois-Rivières to Grand-Mère) and 40 (Montreal to Quebec City.) The city has had a local airport since 1961.

Trois-Rivières is the major cultural centre of the Mauricie region and has theatres, art galleries, a cultural centre, a municipal library, a branch of the Archives nationales du Québec and several museums. A museum of Québecois culture, Musée des arts et traditions populaires (1996), is located in the city's centre near the cathedral and the courthouse. It is housed in the old prison and has an interpretative centre that provides information on prison life. The city is also home to a conference centre. Numerous visitors are attracted to the historical parts of Trois-Rivières, with buildings that go back to the French regime and the nearby site of the Forges du Saint-Maurice, developed by Parks Canada.

Since the establishment of a Catholic diocese in Trois-Rivières in 1852, the city has become the centre for diocesan administration. Its role as an episcopal seat attracted several religious communities which took charge of education and hospital care before these responsibilities were assumed by the state in the 1960s. Today, an extended network of private educational institutions ― Collège Marie-de-l'Incarnation run by the Ursuline order (1697), Séminaire St-Joseph (1860), Institut Kerama, Collège Laflèche, etc ― rival those of the public sector.

The city has a daily newspaper, Le Nouvelliste (established 1920), as well as several television and radio stations. It has hosted a major agricultural exhibition for nearly a century. Each year a Grand Prix car race takes place through the city's streets, and numerous festivals, including the poetry festival held in early October, contribute to the city's dynamic cultural life.