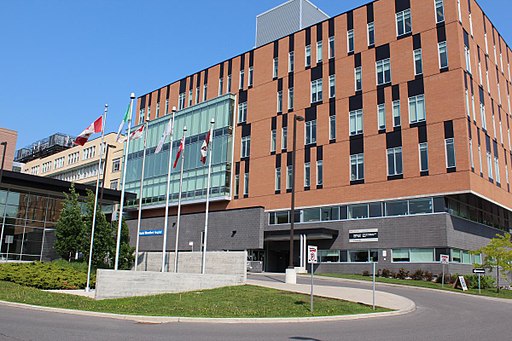 Origins of the Crisis

The Progressive Conservative Party of Ontario, led by Mike Harris, won the provincial elections of 1995 on a platform to clean up the government’s finances, known as the Common Sense Revolution. Harris wanted to reduce the province’s debt and its residents’ tax burden. To achieve these goals, his government proposed rationalizing government services. In April 1996, it established the Health Services Restructuring Commission of Ontario. On 24 February 1997, the Commission announced $150 million worth of budget cuts for the health care sector in the Ottawa region, along with the closing of Montfort Hospital and the merger of other hospitals. 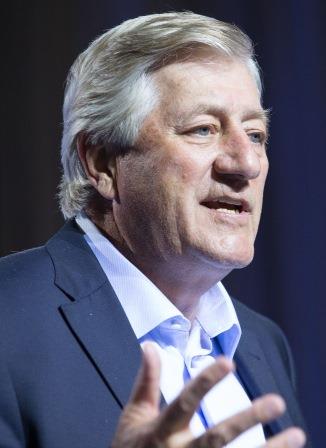 Founded in 1953 to serve the French-speaking population of the Ontario cities of Vanier and Ottawa, Montfort Hospital was notable for its predominant use of French in patient care and labour relations and in the clinical instruction that it provided. Montfort was not the only French-language hospital in the province (there was one in Hearst, for example), but it was the largest as measured by number of beds.

Campaign To Save Montfort Hospital

In the days following the government’s announcement that it would close Montfort Hospital, the SOS Montfort campaign was organized. Its leadership fell to Gisèle Lalonde, the former mayor of Vanier (which was incorporated into the city of Ottawa in 2001). She was supported by several public figures, such as journalist Michel Gratton and lawyer Ronald F. Caza. SOS Montfort also had the support of the hospital’s staff; its president and CEO, Gérald Savoie; and the Chair of its Board of Directors, Michelle de Courville Nicol.

Operating out of the offices of the Montfort Hospital Foundation, SOS Montfort launched a petition calling for Montfort Hospital to be preserved at its current location and for its vocation, its mandate and the essential role that it played in its community to be strengthened. When tabled on 2 June 1997 in the Legislative Assembly of Ontario, the petition bore 135,000 signatures. 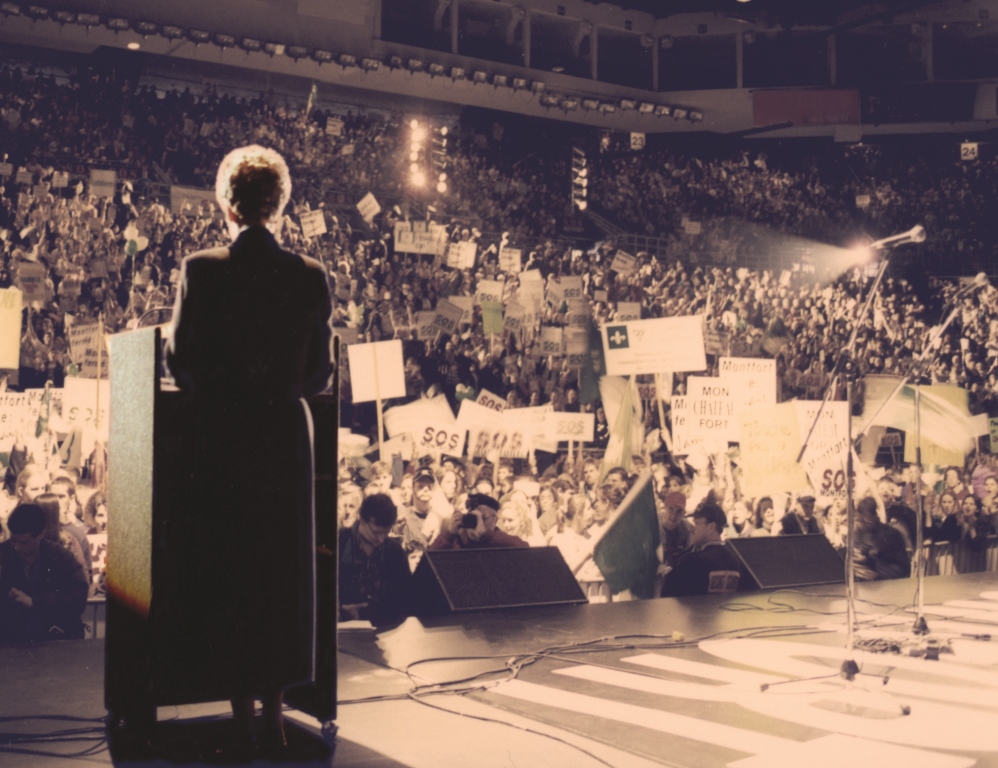 SOS Montfort applied other strategies as well. It held press conferences and launched a campaign to mobilize Ottawa’s high school and college students, asking them to show their support for Montfort by wearing a green ribbon. This campaign culminated on 20 March with a demonstration in which 2,000 students from Ottawa secondary schools and Cité collégiale (Ontario’s largest French-language college) marched to Montfort Hospital to oppose its closing. Two days later, a rally at the Ottawa Civic Centre was attended by over 10,000 people. Franco-Ontarians from other parts of the province had streamed into Ottawa to participate. This event was so symbolic and important that it was broadcast live on the Radio-Canada news network.

The campaign to save the hospital even spread beyond Ontario’s borders. Quebec Premier Lucien Bouchard supported the Franco-Ontarian community, stating in the 3 March 1997 edition of Le Devoir that saving the hospital was a fundamental issue of language rights and that it was inconceivable that the hospital should close. Bouchard met that month with Mike Harris to discuss the issue. SOS Montfort’s main spokesperson, Gisèle Lalonde, reacted favourably to the meeting, stating in the 8 March 1997 edition of Le Droit that if anyone had still had any doubts that Montfort’s closing was an issue of national importance, this meeting between the two premiers should have dispelled those doubts completely.

Founder of the Bloc Québécois and later premier of Québec (courtesy Office of the Premier, Government of Québec).

The cause of Montfort Hospital’s survival gained the sympathy of elected officials in both Ottawa and Quebec City, federalists and sovereignists alike. In the Quebec press, editorial writers and columnists expressed their support as well. Organizations of Quebec civil society that gave SOS Montfort their support included the Société Saint-Jean-Baptiste de Montréal (SSJBM) and two major labour organizations—the Confédération des syndicats nationaux (CSN) and the Fédération des travailleurs et travailleuses du Québec (FTQ) — all of which contributed to the “Resistance Fund” to pay for the legal battle against the hospital closing. About 35% of all the money contributed to the Resistance Fund came from Quebec. 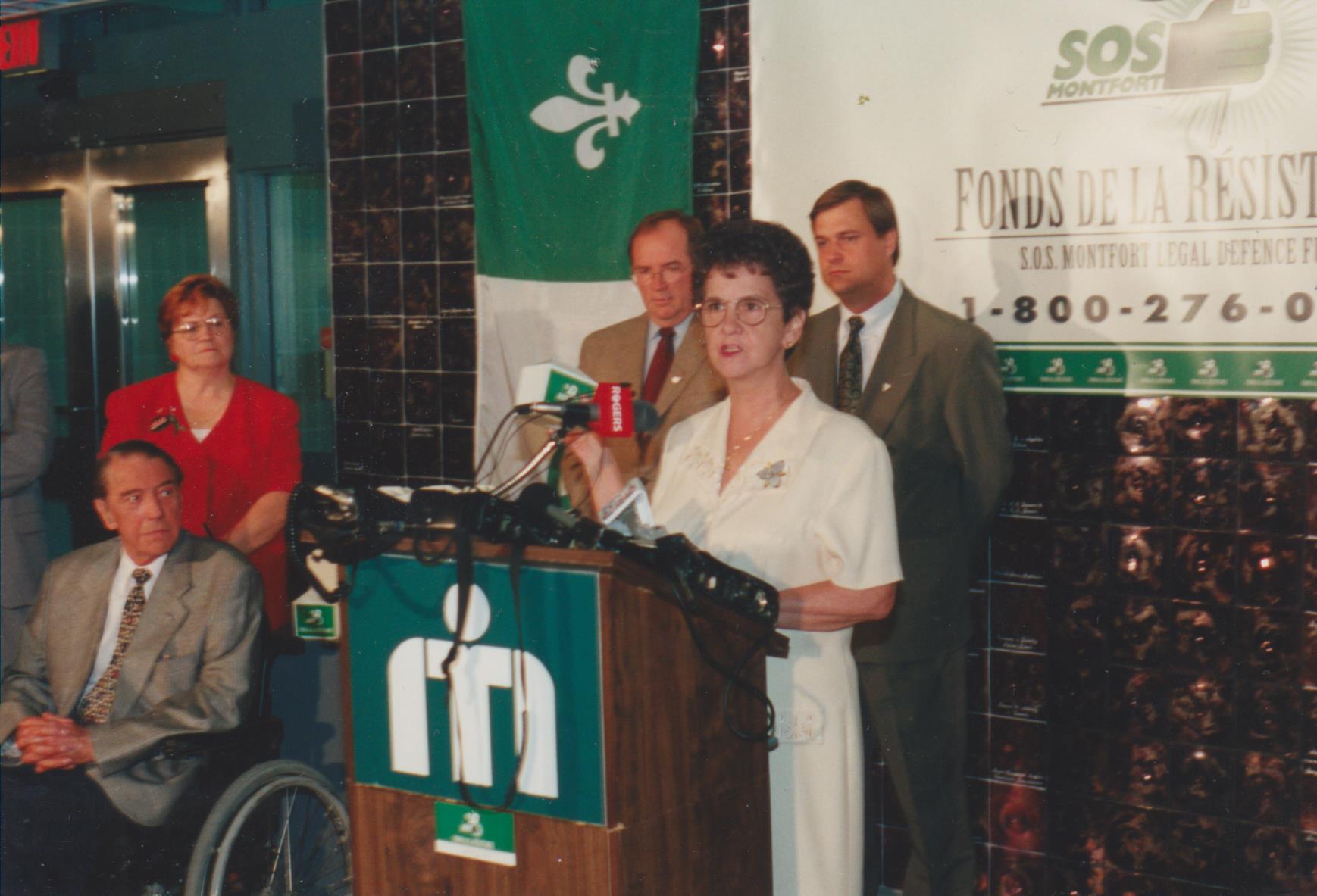 Battle in the Courts

At first, the provincial government seemed to buckle under Franco-Ontarian pressure. In August 1997, the Minister of Health announced a plan to restructure Montfort Hospital so that it would stay open but provide reduced services. However, less than a year after this announcement, in July 1998, negotiations between hospital management and the government hit an impasse. SOS Montfort then announced that it would take the case to court.

On 29 November 1999, the Divisional Court of Ontario found in favour of SOS Montfort. Relying on precedents including the Supreme Court of Canada’s judgment in Reference Re Secession of Quebec (1998), Divisional Court judges James Carnwarth, Robert Blair and Michel Charbonneau found that the Restructuring Commission could not flout the unwritten fundamental principles of the Canadian Constitution, including respect for and protection of linguistic minorities. In their judgment, they wrote, “What is at stake in these proceedings is not simply a minority language issue or a minority education issue. What is at stake is a minority culture issue.” (Lalonde v. Ontario, 1999). In other words, the court ruled that institutions such as Montfort are essential for the survival of cultural communities.

Despite this setback, in December the Restructuring Commission announced that it would appeal this judgment. Two years later, on 7 December 2001, SOS Montfort secured a decisive victory before the Ontario Court of Appeal. The judges concluded that “In exercising its discretion as to what is in the public interest, the Commission was required by the fundamental principles of the Constitution to give serious weight and consideration to the importance of Montfort as an institution to the survival of the Franco-Ontarian minority.“ (Lalonde v. Ontario, 2001) But the opponents of Montfort’s closing would have to wait to claim their victory until February 2002, when the Ontario government announced that it would not appeal the case to the Supreme Court of Canada.

These two judgments defined the Ontario authorities’ obligations to the francophone community above and beyond section 23 of the Canadian Charter of Rights and Freedoms.

The case of Montfort Hospital and the massive mobilization campaign that it inspired have become highly symbolic markers of the identity of French Ontario. Historian Marcel Martel says that the Franco-Ontarian community’s fight to save the hospital was a particular example of its political resistance. By reminding Franco-Ontarians of their past struggles for language rights and reviving memories of Regulation 17 (see Ontario Schools Question), the SOS Montfort movement became part of the tradition and political culture of this minority. According to historian Marie LeBel, the Montfort Hospital case also demonstrates the growing role of the legal field in the discourse and affirmation of official language minority communities since the adoption of the Canadian Charter of Rights and Freedoms.