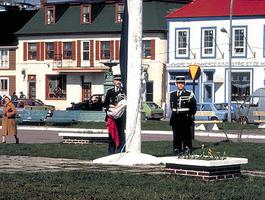 Saint-Pierre and Miquelon, French islands in the Gulf of St. Lawrence, 20 km southwest of the Burin Peninsula, Newfoundland and Labrador. Miquelon (110 km2) was once 2 islands. In the mid-1700s, an isthmus formed to Langlade (91 km²) in the south from sand collecting in the wrecks that had foundered on the reefs and sandbars between the islands. The treacherous waters between Langlade and Saint-Pierre (26 km²) were up to 1900 called Gueule d'Enfer - "the Mouth of Hell." Since 1800 more than 600 shipwrecks have been recorded. About 5500 of the total population of more than 6000 live on the smaller island of Saint-Pierre, where the capital town of the same name is located.

The islands were likely discovered (about 1520) by Portuguese navigator Joao Alvares Fagundes, and were claimed formally for France by Jacques Cartier 14 years later. They were originally settled by 30 Basque and Norman fishermen in 1604, but were uninhabited in 1713 when Britain claimed them under the terms of the Treaty of Utrecht.

The rocky islands are barren, except for scrubby yews and junipers, a thin volcanic soil, and dirt removed from ships' ballast. However, the islands have provided France with a station near the richest fishing grounds in North America. By 1866, 4000 French fishermen were coming annually from St Malo, France, to fish in a fleet of 200 schooners. The fleet was devastated in 1904, when France lost its rights to the French shore. During prohibition, Saint-Pierre was a storage base for Canadian liquor companies and a centre of illegal trade to the US.

Today, France still maintains its presence on the islands and spends some $80 million there annually. Fishing is still important, but like the Canadian fishery, greatly reduced quotas have been instituted since the early 1990s after cod stocks suffered a population collapse from which they have yet to recover. Fish processing provides some employment and aquaculture is being developed. Tourism has increased in importance and there is some farming. Saint-Pierre and Miquelon is also looking to capitalize on off-shore hydrocarbon development.