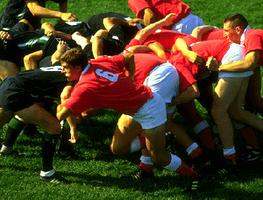 Rugby is an amateur game played by 2 sides of 15 players who carry, kick and pass (forward passes are not permitted) an oval-shaped ball. Players score points by touching the ball over the opponents' goal line (a try) or by kicking it over the crossbar (a goal). Ball-carrying and running games have existed since before the Middle Ages and the story that William Webb Ellis invented the modern game at Rugby School in England, hence the name rugby football, has been largely refuted. Rugby football was distinguished from association football (SOCCER) in 1863 and the sport's controlling body, the Rugby Football Union, was formed in England in 1871. British settlers, garrison troops and members of the Royal Navy probably introduced the game to Canada from 1823 onwards and fostered its development in many parts of the country, especially in Halifax, Toronto, Montréal and, later in the 19th century, Vancouver, which, owing to its favourable climate and strong British tradition, became the game's stronghold. F. Barlow Cumberland and Fred A. Bethune first codified rules for rugby football in Canada in 1864 at Trinity College, Toronto, and the first Canadian game of rugby took place in 1865 in Montr al when English regiment officers and civilians, mainly from McGill U, engaged in competition. Clubs across Canada were established after this and organized contests ensued: Montreal FC (1868), Halifax FC (1870), Winnipeg FC (1879) and Vancouver RFC (1889) are notable examples. In 1874 Harvard and McGill universities played the first international rugby match in North America, and thenceforth North American varieties of rugby began to evolve. Separation between the English and North American types of football occurred in 1882 with the formation of the Canadian Rugby Football Union; the English code of rugby in Canada fell under the control of individual provincial rugby unions which took administrative directives for many years from the RFU in England before eventually operating under the Rugby Union of Canada from 1929 to 1939 when it was curtailed by WWII. It re-formed in 1965 and was renamed the Canadian Rugby Union in 1967.

While British immigrants and military personnel initially fostered rugby's development, touring teams to and from Canada also helped to promote the game by demonstrating its international appeal. A Canadian team first toured the British Isles in 1902, and since that time representative teams have visited Japan, England, Wales, Ireland, Argentina and Australia. Overseas national teams visiting Canada have included Japan, England, Australia, the British Lions, New Zealand, Fiji, Wales and Italy. Provincial, club and schoolboy teams have competed against overseas opponents since 1908 when a BC representative side lost 2 games against the New Zealand All-Blacks in California. Most tours in this category have taken place after 1960 when the Rugby Tours Committee was formed. BC remains the stronghold of rugby in Canada, although the game is played in all 10 provinces. The Carling Cup, emblematic of the national championship, was first won by BC in 1958, and although dormant between 1959 and 1966, the championship was retained by the BC team until Ontario won its first championship in 1971.

Rugby continued its development throughout the 1970s and 1980s. A junior interprovincial championship was inaugurated in 1976, and in 1982 the concept of a national junior team was realized. Canada was successful in its first game at this level, defeating a side representing Japan. Further games have been played against Welsh schools (1983, 1986) and England Colts (1985), with the Canadian side overcoming a powerful Welsh team in the 1986 Vancouver contest. A more significant development in the game of rugby has been the increasing participation of women. There are now more than 30 women's clubs across the country, and a western Canadian women's championship has been held annually since 1983. The first Canadian women's team played an international against the US in late 1987.

These developments, along with improved coaching, via the CRU's coaching program which is linked with the National Coaching Certification Program, have greatly influenced rugby's popularity in Canada, and recognition of Canada's vigorous promotion of the game was apparent in 1987 when the national senior team participated in the inaugural Rubgy World Cup held in Australia and New Zealand. Canada's improvement became fully apparent when the national team stunned the rugby world in the 1991 World Cup by advancing to the quarter-finals of the tournament. Though Canada's national team qualified for subsequent tournaments in 1995 and 1999, it has fallen short of quarter-final competition.