The Royal Proclamation of 1763 was issued by King George III on 7 October 1763. It established the basis for governing the North American territories surrendered by France to Britain in the Treaty of Paris, 1763, following the Seven Years’ War. It introduced policies meant to assimilate the French population to British rule. These policies ultimately failed and were replaced by the Quebec Act of 1774 (see also The Conquest of New France). The Royal Proclamation also set the constitutional structure for the negotiation of treaties with the Indigenous inhabitants of large sections of Canada. It is referenced in section 25 of the Constitution Act, 1982. As such, it has been labelled an “Indian Magna Carta” or an “Indian Bill of Rights.” The Proclamation also contributed to the outbreak of the American Revolutionary War in 1775. The Proclamation legally defined the North American interior west of the Appalachian Mountains as a vast Indigenous reserve. This angered people in the Thirteen Colonies who desired western expansion.

The Royal Proclamation of 1763 was issued by King George III on 7 October 1763. It established the basis for governing the North American territories surrendered by France to Britain in the Treaty of Paris, 1763, following the Seven Years’ War. It introduced policies meant to assimilate the French population to British rule. These policies ultimately failed and were replaced by the Quebec Act of 1774 (see also The Conquest of New France). The Royal Proclamation also set the constitutional structure for the negotiation of treaties with the Indigenous inhabitants of large sections of Canada. It is referenced in section 25 of the Constitution Act, 1982. As such, it has been labelled an “Indian Magna Carta” or an “Indian Bill of Rights.” The Proclamation also contributed to the outbreak of the American Revolutionary War in 1775. The Proclamation legally defined the North American interior west of the Appalachian Mountains as a vast Indigenous reserve. This angered people in the Thirteen Colonies who desired western expansion.This is the full-length entry about the Royal Proclamation of 1763. For a plain language summary, please see Royal Proclamation of 1763 (Plain Language Summary). 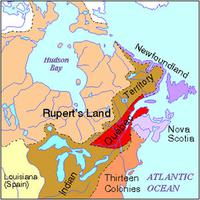 The British victory on the Plains of Abraham in September 1759 placed the city of Quebec under British rule. Montreal capitulated the following year. A temporary military regime was set up until negotiations between Britain and France could be completed.

By the terms signed on 8 September 1760, the British guaranteed the people of New France immunity from deportation or maltreatment; the right to depart for France with all their possessions; continued enjoyment of property rights; the right to carry on the fur trade on an equal basis with the British; and freedom of religion.

With the Treaty of Paris, signed on 10 February 1763, the colony of New France became a British possession. Shortly thereafter, His Majesty King George III’s newly acquired territories were politically organized through the Royal Proclamation of 1763.

Under the policies in the Royal Proclamation, the governor became the authority in the new province of Quebec. The governor was to be appointed by the British government and subject to its directives. English criminal and civil law replaced French law, and the imposition of the oath of allegiance for public employees excluded Catholics from public positions.

These assimilative policies quickly clashed with the realities of a French Catholic society and the political upheavals in the American colonies. British governors James Murray and Guy Carleton were the first to renounce these policies. This was reflected in the provisions of the Quebec Act in 1774. The British Parliament expanded the area of the Province of Quebec, re-established French civil law and authorized the collection of tithes. These changes won the acceptance of the colony’s ruling classes, namely the Catholic clergy and the seigneurs.

Lord Guy Carleton was largely responsible for the Quebec Act, which helped to preserve French laws and customs.
(courtesy Library and Archives Canada/C-2833)

King George’s proclamation became a key legal instrument for the establishment of colonial governments in the provinces of Quebec, East Florida, West Florida and Grenada. It also reserved a large area in the North American interior for the exclusive use of Indigenous peoples. The eastern boundary of this territory, which excluded the colony of Quebec and the Hudson’s Bay Company’s lands, was set along the Appalachians. The western border was not specifically described.

With regards to Aboriginal rights, the proclamation states explicitly that Indigenous people reserved all lands not ceded by or purchased from them: “And whereas it is just and reasonable, and essential to our Interest and the Security of our Colonies, that the several Nations or Tribes of Indians, with whom We are connected, and who live under our Protection, should not be molested or disturbed in the Possession of such Parts of Our Dominions and Territories as, not having been ceded to, or purchased by Us, are reserved to them, or any of them, as their Hunting Grounds.”

The Role of Pontiac’s War

By promising First Nations a degree of land security, the British were trying to stabilize the western frontier of the Atlantic seaboard colonies. This decision was made due to an emerging Indigenous confederacy fighting under Odawa chief Obwandiyag (Pontiac). Beginning in the spring of 1763, the confederacy had briefly seized ten British military posts in the Great Lakes area. Pontiac’s forces sought to prove that Indigenous peoples were still masters of their ancestral lands, despite the British victory over the French army.

Pontiac’s War reminded the British that it was in their interest to protect the First Nations peoples in the region from expansion by the Thirteen Colonies. Britain wanted to secure the allegiance and loyalty of the First Nations. Many of them had recently fought against the British in the Seven Years’ War as allies of the French (see also Indigenous-British Relations Pre-Confederation; Indigenous French Relations). The war had been very costly for Britain and had crippled the economy of France, which lost many of its colonies in the process. The exercise of soft power through diplomacy was therefore considered a more desirable solution than to allow for the potential of further conflict.

Pontiac's War was the most successful First Nations resistance to the European invasion in our history.
(City of Detroit Archives)

The Proclamation and Treaty-Making

King George reserved the western lands as exclusive “hunting grounds” for the “several nations or tribes of Indians” under his “protection.” As sovereign of this territory, however, the king claimed ultimate “dominion” over the entire region. He further prohibited any private person from directly buying Indigenous lands. Instead, he reserved right of purchase for himself and his heirs alone. The proclamation set out a process whereby an Indigenous nation, if they freely chose, could sell their lands to representatives of the British monarch. This could only take place at some public meeting called especially for the purpose. This established the constitutional basis for the future negotiation of Indigenous treaties in British North America. It made the British Crown an essential agent in the transfer of Indigenous lands to colonial settlers.

The first systematic attempts to enforce the treaty-making provisions of the Royal Proclamation took place in the regions north of the Great Lakes, which became Upper Canada in 1791. The treaty-making steps that evolved in this crown colony were later exported to the territories (Rupert’s Land and the North-Western Territory) purchased by Canada from the Hudson’s Bay Company in 1870.

Canadian government officials recognized that the Indigenous peoples of the newly annexed western territory had the same rights to their ancestral lands as eastern First Nations did to their own. In the late 19th and early 20th centuries, eleven numbered treaties were negotiated in the Prairie provinces, northeastern British Columbia, northern and northwestern Ontario, and the western part of the Northwest Territories. They all followed the principles outlined in the Royal Proclamation of 1763.

The Royal Proclamation tends to be closely scrutinized whenever there is cause to examine the legal character of Indigenous land title. For example, the St. Catharines Milling case of 1888 was used to settle a constitutional dispute between the governments of Ontario and Canada. During the case, lawyers for the Ontario government argued that the Royal Proclamation was of no force in the legal expression of Aboriginal rights.

However, in 1973, Supreme Court judge Emmett Hall expressed quite a different view of the proclamation. Responding to a case involving the territorial rights of the Nisga’a Nation, he found that the basic principles of the Royal Proclamation were generally applicable in British Columbia, where the majority of land remains unceded by treaty. The implications of this decision are that Indigenous land rights are legally enforceable over other large areas of the country.

Whether the constitutional applicability of the Royal Proclamation refers to all of Canada or only to parts of the country is an ongoing source of debate. Another question to be faced is whether the Proclamation is itself the source of Indigenous land rights, or whether it merely acknowledges and confirms pre-existing rights.

The proclamation is referenced in section 25 of the Constitution Act, 1982 (see also Constitution Act, 1982 Document). This means that nothing in Canada’s Charter of Rights and Freedoms affects Indigenous peoples’ rights as expressed in the Royal Proclamation. It also assures that its interpretation will remain an important part of any attempt to clarify Indigenous rights in Canadian law.

The 250th anniversary of the Royal Proclamation was marked in 2013 with an academic conference called Creating Canada. Held at the Canadian Museum of Civilization (now the Canadian Museum of History), the conference was organized by the Land Claims Agreements Coalition. The coalition's co-chair, Nisqa'a Nation president Mitchell Stevens, said the proclamation is “a foundational document in Canadian history because it affirms the government-to-government relationship between First Nations and the Crown.”

However, an Idle No More protest at the museum offered a dissenting opinion, as did NDP leader Tom Mulcair, who called the event “the 250th anniversary of broken promises.” Shawn Atleo, national chief of the Assembly of First Nations, said in an interview with the CBC that “The treaty relationships and aspirations that were expressed in the Royal Proclamation are about us sharing the land, wealth and resources of this country. That has not happened.” Atleo also said, “For 250 years the laws and policies of federal governments have been paternalistic at best, and assimilationist at worst… we must resolve the long-standing issues of First Nations control over our lands and our lives.”