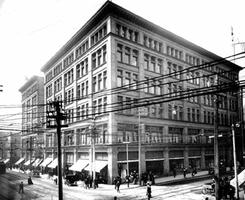 Robert Simpson, merchant, founder of the Robert Simpson Co (b at Morayshire, Scot 16 Sept 1834; d at Toronto 14 Dec 1897). After his apprenticeship, he arrived in Canada in 1854 and found employment as a clerk in a store in Newmarket, Ont. The following year he opened his own dry-goods store there. In 1872, seeking greater opportunities, he opened a small store in Toronto and by 1894 had erected a new 6-storey building which became a longtime competitor of T. EATON CO across Queen St. Though a fire completely destroyed the new building in March 1895, Simpson set up in temporary quarters and in early 1896 opened another building utilizing every new fire-prevention measure. It had nearly 500 employees and 35 departments. His sudden death at age 63 resulted in the sale of the store for $135 000 to a syndicate of 3 Toronto businessmen, A.E. Ames, J.W. FLAVELLE and H.H. Fudger.