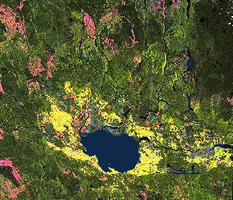 This satellite image of Lac Saint-Jean, Québec, shows how the colours of these photos can be enhanced to show information about the ground features. Settlements are enhanced to appear blue, farms as yellow, swampy fields light blue, and purple to show logged-out areas from the Laurentian forest (courtesy Canada Centre for Remote Sensing). 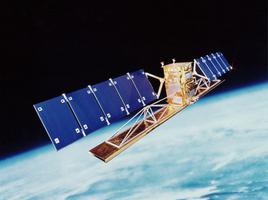 Launched in November 1995, RADARSAT-1 ushered in a new age in remote sensing and firmly positioned Canada as a leader in the internationally competitive Earth observation market (courtesy Canadian Space Agency). 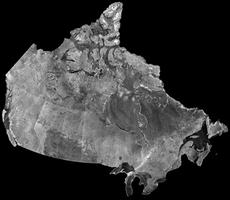 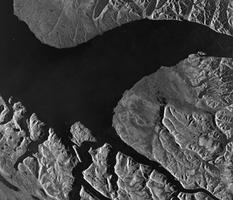 Remote sensing means "sensing" at a distance or, more specifically, deriving data or information about Earth's surface or the atmosphere by observing reflected or emitted electromagnetic radiation.

History
The oldest remote sensing instrument is the photographic camera, which has a long history of use in making observations of Earth from aircraft and, more recently, spacecraft. The earliest recorded airphoto in Canada was taken of the HALIFAX CITADEL from a balloon at an altitude of about 1450 feet (442 m) by Captain H. Esdale, of the Royal Engineers in August 1883.

Aerial photography and airphoto interpretation were developed during WWI for military intelligence and after the war were applied to mapping. The first Canadian aerial photograph was taken in 1923. By 1963, 97% of the country had been photographed in black and white.

Since the 1960s, colour aerial photography has been used extensively for forestry and land use mapping and planning. The first photograph from space was taken from the NASA Gemini III spacecraft in 1965. Since then, space photography has been acquired on Gemini, Apollo, Skylab and Shuttle missions.

The electromagnetic spectrum extends in a continuum from microwave wavelengths of 0.1-100 cm through infrared, visible, ultraviolet and X-ray to gamma-ray wavelengths (measured in billionths of a metre). Photographic film can be used to record only a small part of this spectrum, eg, mainly visible light. Remote sensing instruments use the much larger nonvisible portions of the spectrum as well; this technology has enormously improved our ability to observe, measure and manage the world's RESOURCES and ENVIRONMENT .

Photographic films sensitive to the infrared spectral region (0.7-0.9 um) responsive to living flora were developed for use in cameras during WWII for camouflage detection. Infrared photography is now regularly used for measuring plant vigour and detecting stress caused by disease or lack of moisture and for terrain mapping. Photographic film is not sensitive to wavelengths beyond the near infrared region; thus, nonphotographic sensors must be used.

Infrared scanners can detect radiation in the thermal infrared band (3-14 um) and produce an image in which the brightness of an object in the scene is related to the temperature of the object. This technique is used from aircraft to measure heat loss through the roof of buildings caused by poor insulation, to trace effluents from power plants and sewers into rivers and lakes, to detect incipient forest or coal mine fires and to locate water supplies by detecting where underground streams discharge at the surface. It is used from spacecraft to map temperature distribution in water bodies.

Laser-based sensing systems have been developed in Canada to measure and map water depth in clear coastal waters, as well as to make terrain profiles for topographic mapping and tree height assessment.

The camera and the infrared scanner have a serious shortcoming as remote sensing instruments: they cannot see through clouds. RADAR, which operates in the microwave region of the spectrum, can provide all-weather, night-and-day remote sensing information. For Earth surveying, SLAR (Side-Looking Airborne Radar) and SAR (Synthetic Aperture Radar) are used. SAR produces radar images of high resolution by using special processing techniques.

As a result of the need for all-weather monitoring of ICE in Canada's Arctic in support of the oil industry, Canadian industry developed an efficient, compact, solid-state airborne SAR which has become the world standard. It is a major source of export revenue to Canada in the remote sensing field and is also the radar most suitable for use on SATELLITES.

The first satellite designed specifically for remote sensing purposes was ERTS 1 (later named Landsat 1), launched 23 July 1972. It was followed by Landsat 2 in January 1975 and Landsat 3 in March 1978. Landsat 4 and 5, both of which carry a unique new sensor, were launched in July 1982 and March 1984, respectively.

These satellites travel in a polar orbit and carry instruments which sense the energy reflected from a 180-km-wide swath underneath the satellite path. They provide complete coverage of Earth every 16-18 days. Data is transmitted from the satellite to ground stations, where they are recorded on magnetic tape for conversion to image (photographic) form or for computer analysis. Technology developed in Canada is being used in most ground stations now operating around the world.

In Canada, data from these satellites have been received, recorded and distributed to users from a station at PRINCE ALBERT, Saskatchewan, since 1972. A second station, designed for the reception of SPOT (Système probatoire d'observation de la Terre) data, went into production in mid-1986 at GATINEAU, Québec.

The information has been used for purposes as diverse as mapping of snow and ice distribution, geological structures, wetlands of importance for WATERFOWL habitat, forest clear-cut and burns, revising topographic maps, making studies of EROSION, assessing the effect of engineering projects on aquatic vegetation, measuring the vigour and acreage of crops, and determining present land use and changes.

Seasat was a short-lived satellite (June-October 1978) that carried 5 sensors for use in measuring oceanographic parameters (eg, ocean surface temperature, surface wind speed and direction, wave height). This satellite was of particular interest to Canada because one of the 5 sensors was a SAR, which demonstrated the usefulness of spaceborne radars in measuring ice distribution in the Canadian Arctic as an aid to shipping and offshore exploration.

Weather satellites (eg, the NOAA, GOES, TIROS and NIMBUS series) carry instruments primarily for use in METEOROLOGY but have also produced useful information of ice distribution and water surface temperature as well as details on drought and crop conditions for the Canadian Wheat Board. The NIMBUS-7 satellite carries an instrument that is used primarily for measuring sedimentation and chlorophyll levels in water.

SPOT is a French series of satellites first launched in February 1986. It carries 2 pointable instruments which operate in 2 modes - a high resolution (10 m) panchromatic band for use in mapping, and a 20 m resolution multispectral solid-state sensor operating in the green, red and near infrared to yield a colour-infrared type image. SPOT can also provide stereoscopic representations for topographic mapping. Canada's SPOT receiving stations provide image data for Canada and the US.

A number of nations and agencies are now planning a new generation of remote sensing satellites. These vehicles will carry sensors with improved performance, including more and different spectral bands - including radars - leading to all-weather sensing capabilities. The most sophisticated of this new generation is Canada's RADARSAT (seeSPACE TECHNOLOGY), built by Spar Aerospace Ltd. RADARSAT, which contains a C-band SAR, was launched on 4 November 1995.

The power of remote sensing as a means of providing information for resource management and environmental monitoring is greatly enhanced by the use of computer techniques. All higher resolution satellite and specialized airborne images are created using computers. The images may be in the form of photographs or in a machine-readable format. Canada first began research in the area of digital image processing of satellite data for resource studies in 1973.

Research by the federal government resulted in sophisticated Canadian image analysis technology which was then transferred to industry. In the 1980s, Canada exported 35 systems for every one imported - over 25% of the total world market is now held by Canadian industry. Canada continues to do research in remote sensing image interpretation.

Images can be processed by computer to overlay a map or another image accurately, thereby permitting the updating of maps and the detecting of changes such as those caused by forest depletion or engineering projects (eg, MEGAPROJECTS). Canadian technology is being used for such monitoring in Brazil, Thailand, Indonesia and other tropical countries. Another computer technique allows "themes" such as water, crops, summer fallow or forest fire burns to be identified and displayed cartographically, and the area of each theme to be computed. This technique is being used in Canada for computing potato acreages and forest fire burn areas.

Using still another technique, images are processed to make features of interest easier to identify visually. For example, variations representing different rangeland conditions are accentuated to assist in range management. An optically based system has been developed in Canada by industry to project images in photographic transparency format onto maps to identify areas of change, or to map features of interest using traditional airphoto interpretation techniques. The system, used to update Canada's 1:250 000 topographic maps, has been exported to more than 30 countries in the past 12 years. Canada has exported a range of remote sensing technology to over 85 countries, with export sales averaging between 50-70% of total sales by the Canadian industry.

The Canadian remote sensing industry's sales and employment have been growing at a compounded rate of approximately 25% per year since 1974 to stand at about 3000 employees with total activity approaching $300 million by mid-1996.