Complex and contradictory, Papineau was the first effective political leader of his people and a fitting symbol of their discontent.

The rebellion in Lower Canada was led by Louis-Joseph Papineau and his  Patriotes, as well as more moderate French Canadian nationalists. Together, they dominated the elected Legislative Assembly. Since the 1820s, they had peacefully opposed the authority of the Catholic Church. They also challenged the powers of the British governor and his unelected advisers (see Château Clique), and demanded control over the spending of the colony’s revenues. (See also: Francophone-Anglophone Relations.)

Their political demands, which included democratic pleas for responsible government, were rejected in London. Meanwhile, French Canadian farmers suffered through an economic depression in the 1830s. In the urban areas, tensions rose between French Canadians and the anglophone minority. All of this led to protest rallies across the colony and calls for armed insurrection from the more radical Patriotes.

There were two outbursts of violence. The first was in November 1837. Patriote rebels fought trained British regulars and anglophone volunteers in a series of skirmishes. The defeat of the disorganized rebels was followed by widespread anglophone looting and burning of French-Canadian settlements. Papineau and other rebel leaders fled to the United States.

With the help of American volunteers, a second rebellion was launched in November 1838. However, it too was poorly organized and was quickly put down. It was followed by further looting and devastation in the countryside.

The two uprisings left 325 people dead, all of them rebels except for 27 British soldiers. Nearly 100 rebels were captured. After the second uprising failed, Papineau left the US for exile in Paris. (See also: Rebellion in Lower Canada.)

The insurgency in Lower Canada inspired anglophone radicals in Upper Canada to take their own action against the Crown. Their revolt was smaller and less deadly.

The rebellion in Upper Canada was led by William Lyon Mackenzie. The Scottish-born newspaper publisher and politician was a fierce critic of the Family Compact. The Compact was an elite clique of officials and businessmen who ran the colony, largely through a system of patronage. Mackenzie and his followers also opposed a system of land grants that favoured settlers from Britain over those with ties to the United States, many of whom were also denied political rights.

In 1837, after years of failed efforts at peaceful change, Mackenzie convinced his most radical followers to try and seize control of the government and declare the colony a republic. About 1,000 men, mostly farmers of American origin, gathered for four days in December at Montgomery’s Tavern on Yonge Street in Toronto. On 5 December, several hundred poorly armed and organized rebels marched south on Yonge Street. They exchanged gunfire with a smaller group of militia loyal to the Crown. The bulk of the rebel force fled in a state of confusion once the firing started.

The fiery and principled Scot was the catalyst for the turbulent politics of the 1830s in Upper Canada.
Courtesy Library and Archives Canada/C-1993

Three days later, the remaining rebel group was dispersed from the tavern by loyalists. They included about 120 Black soldiers under the command of Colonel Samuel Jarvis. (Hundreds of Black Canadians volunteered for service during the rebellions. They formed fighting units — known as “Coloured Corps” — in Chatham, Toronto,  Hamilton, Sandwich (Windsor) and along the border in the Niagara region.)

There was a small, second confrontation soon after in Brantford. The insurgents were once again dispersed. Mackenzie and other rebel leaders fled with about 200 followers to the US. With the help of American volunteers, the various rebel groups launched raids against Upper Canada. This kept the border in a state of turmoil for nearly a year.

With the support of Americans who wished to liberate Canada from British rule, Mackenzie took control of Navy Island in the Niagara River, just upriver from the falls. He proclaimed a republic of Upper Canada. He was forced to withdraw on 14 January, after Canadian volunteers burned the rebel ship, Caroline. It had been supplying Mackenzie’s forces and was set adrift over the falls.

The insurgency fizzled after 1838. Mackenzie spent years in exile in New York. He returned to Canada following a government pardon in 1849. (See: Amnesty Act.) Others weren't so lucky. Only three men — two rebels and one loyalist — were killed in the early stages of the rebellion. But many captured rebels were later executed by the government. (See also The Early American Republic and the 1837–38 Canadian Rebellions; Rebellion in Upper Canada.) 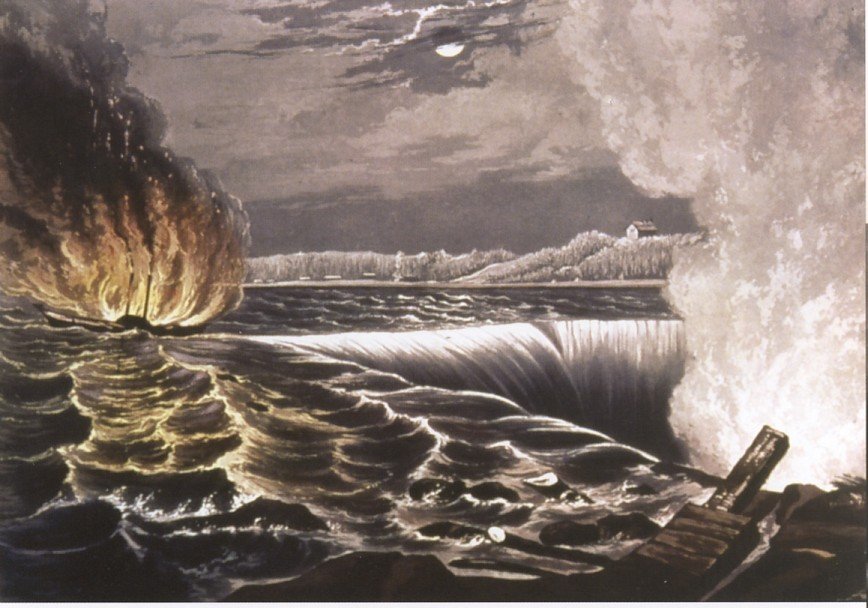 The destruction of the Caroline steamboat by fire, on the Falls of Niagara, Upper Canada, on the night of Friday the 29th December 1837

Historians have disagreed about how much popular support each rebellion received, and to what degree the uprisings were necessary. One argument is that the rebellions were the inevitable result of undemocratic, unworkable colonial systems, and that the imperial government in London was out of touch and unsympathetic to reform. Another view is that the insurgencies amounted to pointless bloodletting, which may have even slowed the pace of reform.

One fact is clear: the rebellions prompted the appointment of Lord Durham and the writing of the Durham Report. It recommended the two colonies be united as one. The Province of Canada came into being in 1841. This in turn led to the introduction of responsible government.

Although the rebel leaders were thwarted in their goals, Papineau and Mackenzie each found a place in history as unlikely folk heroes who fought bravely, if not carefully, for democratic ideals. Their failure paved the way for more moderate reformers, such as Louis-Hippolyte LaFontaine in  Canada East (formerly Lower Canada) and Robert Baldwin in  Canada West (formerly  Upper Canada). They worked together across language lines to bring democratic reform and self-government to the newly united Canada.