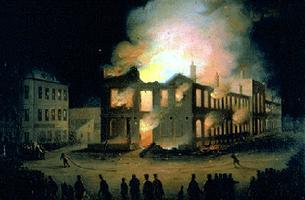 Rioters infuriated by the passing of a law to compensate the victims of the 1837 Rebellions. Painting by Joseph Légaré (courtesy McCord Museum).

Rebellion Losses Bill, modelled on Upper Canadian legislation, was introduced by Louis LaFontaine in Feb 1849 to compensate Lower Canadians whose property had been damaged during the Rebellions of 1837-38 (totalling approximately £100,000). It was similar to legislation for Upper Canada and was based upon a claims report approved in principle in 1846. LaFontaine saw the bill as a symbolic means to heal the wounds of the rebellion and buttress French Canadian claims to equality and power in the Canadas by testing the strength of responsible government. Consequently the growing influence of Louis-Joseph Papineau could be stemmed. The Tories saw the bill as a sign of French domination of the union and their own loss of power; they criticized it as payment for disloyalty. (In fact, because it was difficult in any given instance to determine which side in the conflict had caused the damage, some rebels, as well as those who remained loyal to the government, were compensated for losses; only those convicted or exiled were excluded.) Over heated Tory opposition, the legislation was passed by a majority of Reformers in both sections; the Tories then demanded that Gov Gen Lord Elgin refuse assent.

Despite his misgivings, Elgin understood the meaning of local responsibility and signed the bill into law 25 April 1849. He was attacked by an English-speaking mob in Montréal and the Parliament buildings were burned (see Montréal Riots). The Montréal merchants, feeling the effects of an economic depression, advocated annexation to the US. However, Elgin was supported by the British government, and the concept of responsible government was confirmed.