The Paris Crew was a rowing team from Saint John, New Brunswick, that achieved global acclaim days after Confederation by placing first at the International Regatta during the Paris Exposition of 1867. The team won multiple other titles until experiencing its first official loss in 1870 to an English team from Newcastle upon Tyne. During their 1871 rematch, James Renforth, leader of the “Tyne Crew,” collapsed and died. The Paris Crew drew international attention for its accomplishments, contributing to Canada’s reputation for sporting (particularly rowing) prowess and inspiring pride in the young country.

Formation of a Team

In the 19th century, the economy of Saint John, New Brunswick (located on the Bay of Fundy), was dependent on water-based industries such as fishing, shipbuilding and shipping. The ocean provided not only a means of living, but also opportunities for recreation. Watersports were popular pastimes, rowing in particular, and participants employed their strength, knowledge of the water and skills in boat design in local competitions. Winners of local rivalries typically moved on to compete against teams elsewhere in the region. For example, in 1856, a Saint John crew won a race in Massachusetts against a New York team. In the mid-1860s, Robert Fulton, Samuel Hutton, George Price and Elijah Ross began racing together.The team of fishermen (with the exception of Ross, who was a lighthouse keeper) achieved local success, defeating all other notable city teams in 1866. The Montreal Gazette later declared, “from their childhood up [they] have been almost more at home on water than on land.” 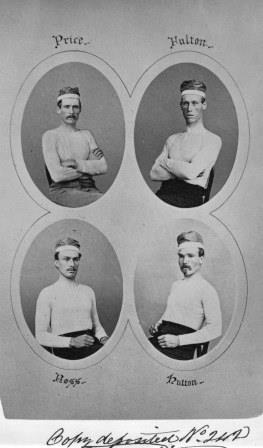 The Paris Crew was a rowing team from Saint John, New Brunswick, that achieved global acclaim days after Confederation by placing first at the International Regatta during the Paris Exposition of 1867.

New Brunswick residents were so confident in the team’s strength that they raised $4,000 (with an additional $2,000 provided by the provincial government) for the team to travel to Paris for the International Regatta, part of the Exposition of 1867. The rowing championships were held on 8 July 1867, mere days after Confederation. Competing against well-known European teams, the New Brunswick crew was considered quaint because of differences in rowing style, boat construction and uniform. A correspondent from the Manchester Guardian remarked:

Among the strange-looking people whom this regatta has brought together not the least strange were a certain crew of four sturdy New Brunswickers, who, having beaten everything on their own waters, had brought two home-made boats some thousands of miles to show the rest of the world how to row. With their flesh-coloured jersies [sic], dark cloth trousers, leather braces, and bright pink caps, they were in striking contrast to their neat competitors.

Despite the New Brunswick crew’s unorthodox appearance, the team won both of its races, prompting the reporter to quip that their performance “should make either English oarsmen or English boatbuilders reconsider the first principles of their arts.” They won “handily,” according to Fulton, who even had time to wave his hat at spectators as they rowed by. Their victory was completely unexpected. The Canadian team’s success shocked European rowers and fans alike. Reflecting in 1905 on their achievement at the Paris Expo, Fulton stated the gold medals “[were] something we prized more than money.”

Fulton, Hutton, Price and Ross received a hero’s welcome upon their return to New Brunswick and were nicknamed “The Paris Crew” after the site of their triumph. Their next major challenge was in October 1868 when they faced the Ward brothers, a team of talented American siblings, in Springfield, Massachusetts. The Saint John team triumphed again, to the delight of its supporters (many of whom had placed significant bets on the crew’s success). Having previously beaten Europe’s best, the victory over the Ward brothers (who had not participated in the Paris Expo) cemented the Paris Crew’s reputation as “the champions of both sides of the Atlantic.” Their success continued, as the Crew won races in Lachine, Toronto and Niagara during the summer of 1869.

In the autumn of 1870, the Paris Crew faced the “Tyne Crew,” an English team from Newcastle upon Tyne led by James Renforth. The race, hosted in Lachine, Québec, was billed by the Montréal Daily Witness as a “match between the champion crews of the old and new worlds.” The Victoria Daily Standard predicted a challenging race for the Canadian team, advising that “[f]oemen of such calibre have not yet been pitted against the Paris Crew, whose easy victories over lesser stars must be dismissed from our minds when estimating their chances of success at Lachine.” In addition to the strength of the opposing team, the Canadian team faced difficult weather conditions. The Saint John Daily Evening News reported that, although “the world and his wife hied off [went quickly] to the race… [and] at least fifty-five thousand souls must have been present,” the beginning of the race was delayed by the Paris Crew’s reluctance to row in windy conditions. Unlike the Newcastle boat, which had barriers to prevent water splashing into the shell, the Canadian boat was vulnerable to waves. The Paris Crew lost the race, with differences in boat construction and rowing style likely aiding the Newcastle team. The loss was such a shock that “many of the St. John followers of the crew had to send home for money enough to bring them back. They had backed their favourites to the finish,” according to the St. John Daily Sun. Despite the loss, the citizens of Saint John received the Paris Crew warmly upon its return to the city. 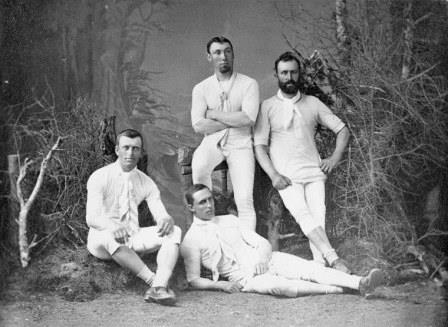 A rematch was scheduled for 23 August 1871 on the Kennebecasis River in New Brunswick. Renforth was the only member of the 1871 Tyne Crew who had competed in the 1870 race, but this did not diminish anyone’s interest in the rematch. Anticipation for the race was high; the Montréal Daily Witness described how the owner of a cottage overlooking the river

let out his six front windows for $10, and charged ten cents a head to stand on the ground in front… The St. John people, old and young, rich and poor, were prolific in their display of pink ribbon—Paris crew colors…rarely was to be seen the noble dark blue of the Englishmen.

The same newspaper estimated that “the number of spectators…had reached about twenty thousand [by 7:00 a.m.] and were every minute being added to by hundreds.” The race began at approximately half past seven in the morning. The two teams were close for the first three-quarter-mile of the six-mile course, at which point the Newcastle team attempted a burst of speed to overtake the Paris Crew. Renforth fell backward into the arms of his teammate Henry Kelly [or Kelley], prompting the Newcastle team to row to shore. Amidst general confusion, the Paris Crew completed the course. Some onlookers suspected that the Newcastle team had been bribed to deliberately lose while others questioned whether Renforth had been poisoned. He was taken to the team’s temporary residence and died shortly before 9:00 a.m. Although at the time “congestion of the lungs” was reported as the cause of death, today historians suspect that he suffered a heart attack from overexertion and complications related to epilepsy. News of Renforth’s death was received abroad with shock. On the 19th anniversary of his death, Australian newspaper the Sydney Mail observed, “the death of England’s acknowledged best man… No one seems to have filled his place either as regards skill, strength, or stamina.”

Fundraisers were held in the Maritimes for Renforth’s wife, and the name of the race location was changed from The Chalet to Renforth in his honour. In 1998, Renforth was amalgamated with several communities to create the town of Rothesay, where today James Renforth is memorialized by James Renforth Drive and Renforth Rotary Park. The town also has a sculpture dedicated to the 1871 race and the Paris Crew. 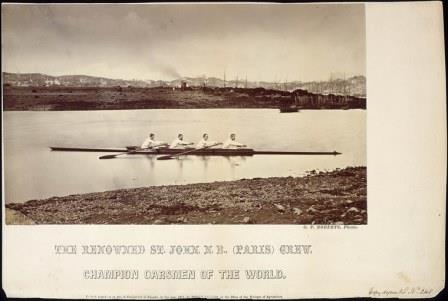 Members of the Paris Crew rowing at Saint John, New Brunswick. In 1871, they raced against the Tyne Crew, an English team that had defeated them in 1870.

End of an Era

The “fatal race” of 1871 (as termed by the press) marked the beginning of the end of the Paris Crew’s high-profile career. The team won another regatta in 1873 on the Kennebecasis River but in 1875 tension arose between Hutton and the other members over ownership of the team boat. Fulton, Hutton, Price and Ross raced together for the last time in 1876 in the American Centennial regatta in Philadelphia, where they “were badly beaten by a raw crew of Halifax fishermen.” At the same regatta, Torontonian Edward “Ned” Hanlan was victorious in another category, heralding a new generation of talented Canadian rowers (including Alex Brayley of Saint John and Wallace Ross of Memramcook, New Brunswick) and a shift in popularity from four person boats to one-person sculls.

Samuel Hutton passed away at age 50 in August 1894 when the yacht on which he was sailing, the Primrose, capsized during a regatta. Robert Fulton competed successfully in individual sculling races until 1874. Following his retirement from competitive rowing, he remained active in watersports, sailing and refereeing regattas. According to the St. John Daily Sun, in 1875 he was “appointed a boatman and tide waiter in the customs [service] and was ever a good official.” Fulton passed away in February 1906 at the age of 61 and was buried in the same cemetery as Samuel Hutton. The St. John Daily Sun described Fulton’s funeral as “one of the largest attended in St. John for years.” In his final years George Price worked as a customs official, like Fulton, and died in March 1909. Elijah Ross became a well-respected boat builder. The last living member of the team, Ross sold the Paris Crew’s boat in 1909 and rowed it across the harbour a final time to deliver it to its new owners, a syndicate of Saint John residents, because he reportedly wished (according to the St. John Sun) for the boat to remain in the city. Ross died in November 1920.

The Paris Crew was notable not only for its athletic triumphs, but also for the excitement and pride its members sparked in the recently established country of Canada. In 1881, the Toronto Daily Mail argued that the Expo in Paris marked “the first occasion on which Canada had distinguished herself abroad with the oar, and the… victories… were hailed with enthusiasm from one end of the newly-created Dominion to the other.” Prior to the Crew’s first race against Newcastle in 1870, the Toronto Globe reported, “[p]erhaps since Confederation nothing has occurred which so thoroughly brings home to the broad mass of our people that our bold Maritime friends are now our fellow countrymen in name and fact. It is a glorious responsibility that is upon the Paris crew. To be the first to uphold the strength, skill, pluck and honor of our country’s athletes.” 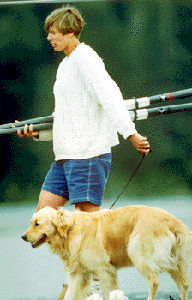