A new type of newspaper, the “people’s journal,” developed in industrial cities during the early 20th century. Styles varied, but people’s journals abandoned direct political party affiliation and emphasized news coverage, especially sensational news. These papers were challenged by revamped, quality papers, such as the Montréal Gazette and the Toronto Mail, which strove to win an elite readership by offering extensive coverage of political and business affairs (see Politics and the Media).

The big-city dailies, usually several in each large metropolitan centre, separated the functions of reporters, desk editors, city and news editors, and columnists. They thereby created the basis for career journalism.

The number of daily newspapers in Canada peaked at 143 in 1911. By then, the pressures to curb competition and concentrate ownership had already begun. During the First World War (1914–18) and immediately after, the number of newspapers began to fall. In each town and city, newspapers vied with each other to expand circulation and capture advertising dollars. The competition was costly. Losers merged with stronger papers or went out of business. Otherwise, they were swallowed by budding media conglomerates.

Southam Inc., created in 1904 by William Southam, owner of the Hamilton Spectator and Ottawa Citizen, began purchasing newspapers across the country, including the Calgary Herald (1908), Edmonton Journal (1912), Winnipeg Tribune (1920) and The Province in Vancouver (1922). In Toronto, the Mail and the Empire merged in 1895. The resultant Mail and Empire merged with the Globe in 1936 (see Globe and Mail). By 1949, two formerly independent Halifax newspapers, each with two daily editions — The Chronicle (morning) and The Star (afternoon); and The Herald (morning) and The Mail (afternoon) — had merged into one operation with two daily editions — The Chronicle-Herald (morning) and The Mail-Star (afternoon).

The growth of radio in the 1930s and television in the 1950s broke the print monopoly over advertising. By 1953, there were only 89 daily newspapers in the country. By 1986, that number had climbed to 110. However, by the late 1980s, fewer Canadian cities were served by two or more separately owned dailies. With political partisanship becoming less important to readers, the system of the two-newspaper town — one Liberal, one Conservative — had gradually broken down.

Mergers and closings of big-city dailies in the 20th century contrasted with the emergence of new dailies in growing cities (see Urbanization). An important new development after 1960 was the appearance of tabloid newspapers in the big cities. Until their arrival, nearly all big-city dailies were broadsheet newspapers or mergers of newspapers already established by the turn of the century.

Tabloids repeated the strategy of Canada’s first mass-circulation dailies in the late 19th century (La Presse in Montréal and the Toronto Star) of appealing to the “lowbrow” audience. The pioneer of tabloids in Canada was Pierre Péladeau with the extraordinarily successful Le Journal de Montréal and Le Journal de Québec in the 1960s. TheToronto Sun, rising out of the ashes of the Toronto Telegram in 1971, repeated this success in English Canada — adding right-wing populism to the tabloid formula of sex, sin and sport — and expanded into a chain including Sun newspapers in Edmonton, Ottawa and Calgary (see Sun Media Corporation).

The other main innovation in newspaper marketing occurred at the upscale end of the market in 1980 and succeeding years, when the Globe and Mail, owned by the Thomson Group as part of its takeover of FP Publications, made use of the new technology of telematics to publish a national edition. This edition was transmitted via satellite to printers in Atlantic, Central and Western Canada (see Satellite Communications).

These various developments provided Canadians, depending on where they lived, with roughly four types of daily newspapers: upscale, national dailies, represented by the Globe and Mail and National Post (established in 1998) in English and Le Devoir in French; tabloid newspapers; small-city dailies, such as the Thomson papers and the smaller Desmarais papers in French; and middle-market omnibus dailies, the largest circulation group, existing as monopolies in most larger cities, competing with tabloids in others. Those dailies were typified by Southam newspapers such as the Calgary Herald or Montreal Gazette in English and Unimédia’s Le Soleil of Québec City in French. A fifth category consisted of Chinese-language dailies, the Toronto Chinese Express and Shing Wah Daily News and the Vancouver Chinese Voice and Chinese Times. 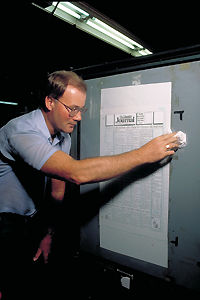 The page is prepared for photographing (photos by Brian Gavriloff/Edmonton Journal). 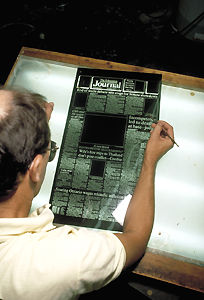 Blemishes are removed by hand before the plates are made (photo by Brian Gavriloff/Edmonton Journal).
PreviousNext

In many ways, the Toronto Star was in a category all its own. While it was a big-city daily that competed with other big-city dailies, tabloids and national newspapers in Toronto, the Star commanded the largest circulation in the country, even though it was not a national newspaper. Like the national papers, it had a large stable of foreign correspondents.

By 1981, 89 per cent of adults reported reading at least one daily newspaper each week; 69 per cent read five or more issues per week. Regular newspaper reading came close to matching the proportion of the population that could get prompt newspaper delivery, with readership a little lower in French Canada than in English.

The French-language market accounted for 18 per cent of national circulation, spread among 11 newspapers: nine published in Québec, one in Ottawa and one in Moncton. Ninety per cent of French circulation was accounted for by three chains: Pierre Karl Péladeau’s Quebecor Inc. (with about half of the chain circulation), Paul Desmarais’s Gesca (see Power Corporation Of Canada) and Jacques Francoeur’s UniMédia (see also Québec Weekly Newspapers).

In the 1980s, daily newspapers in the larger cities moved from afternoon to morning publication and to publishing Sunday editions. The dailies consolidated a place for themselves alongside other media, helped somewhat by the fragmentation of radio and TV audiences owing to the multiplication of stations and channels.

The newspaper landscape changed gradually, with concentration of ownership increasing by the decade. Canada’s four largest newspaper owners controlled 36 per cent of circulation in 1960, 53 per cent in 1970 and 65 per cent in 1980. By the early 1980s, only one quarter of Canadian newspapers were independently owned. The concentration of ownership was reflected regionally by the fact that in all but two provinces (Ontario and Nova Scotia), single chains controlled two-thirds or more of provincial circulation. By 1990, the four largest newspaper owners controlled 67 percent of circulation.

A further concentrative factor contributing to homogeneity in Canadian journalism was the fact that daily newspaper proprietors held common ownership of the dominant news agency, the Canadian Press, which was also a major supplier of news to radio and TV stations.

Newspapers were studied by the 1969–70 Senate Special Committee on Mass Media, under the chairmanship of Senator Keith Davey, and by the 1980–81 Royal Commission on Newspapers, chaired by Tom Kent and known as the Kent Commission. Both studies examined the concentration of newspaper ownership and the decline of newspaper competition, the Kent commission stressing the conglomeration of newspapers with other types of business (see Media Ownership and Media Convergence).

Both studies maintained that freedom of the press embodied the principle of widespread dissemination of information and opinion from a diversity of sources, and that this could be injured by excessive concentration of the press. The Davey recommendation that the federal government establish a press ownership review board to curb newspaper mergers went unheeded.

The Kent recommendation that newspaper owners should not be permitted to hold radio and TV broadcasting licences in the same market was accepted in principle by the Trudeau government. However, it was given only limited application by the CRTC and was dropped by the Mulroney government. Ottawa also put pressure on newspapers to belong to press councils. By the late 1980s, press councils were functioning in all provinces except Saskatchewan. The Kent recommendations to reduce the worst cases of concentration and to offset the effects of conglomeration by measures to provide for journalistic independence and public accountability were not accepted. They were strongly opposed by the owners, who claimed the measures would interfere with press freedom.

The Kent Commission found that the economics of the newspaper industry were conducive both to reduction of competition in local markets and to concentration of ownership. Newspapers derived about 80 per cent of their revenue from selling 50 to 60 per cent of their space to advertisers and only about 20 per cent of their revenue from selling newspapers to readers. Advertisers in most markets were able to reach readers more cheaply through one newspaper than through two or more. Thus, head-to-head competition between the same type of newspapers disappeared from most cities, and a limited variety of newspapers was only possible where the market was large enough to be segmented into distinct audiences.

At the same time, the high cost of starting or reequipping a newspaper, combined with the economies to be realized through skilled central management, favoured chains over independents. Once a newspaper’s monopoly was established in a market, a paper became more profitable than the average big business. 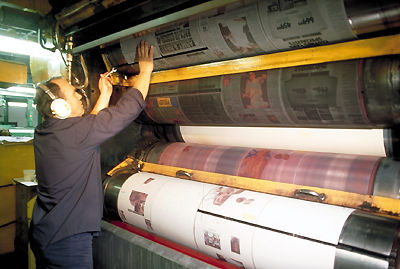 Checking the plates on the drums. There are 4 plates, one each for black, red, blue and yellow (photo by Brian Gavriloff/Edmonton Journal). 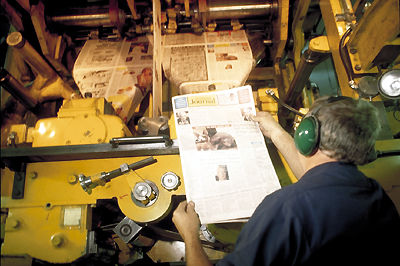 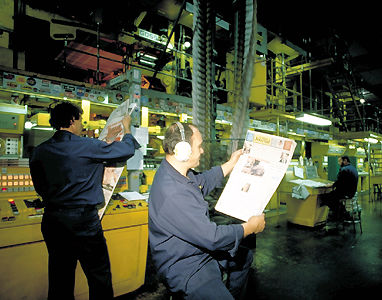 Off the press, folded and ready to go (photo by Brian Gavriloff/Edmonton Journal).
PreviousNext

By the late 1980s, most newspapers belonged to conglomerate enterprises with large holdings in other media or non-media businesses. Some leading publishers were again diversifying, this time into new electronic print media, including services that provided access to content on office or home computers or videotex services for access on adapted television terminals with key pads (a precursor of the Internet). 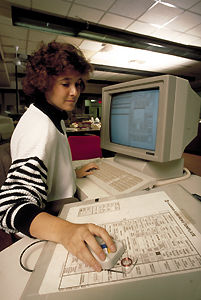 The Globe and Mail, for example, established the Info Globe online service with a database of the newspaper’s contents over a number of years and in the 1990s went into partnership with the Chapters bookstore chain. Southam Inc. and Torstar Corp, owners of the Toronto Star, formed Infomart, a videotex marketing organization prominent in the development of the Canadian Telidon system; however, the Star later dropped out. Le Soleil of Québec City and La Presse of Montréal were early participants in videotex trials.

Electronic print was expected to cut into newspapers’ advertising revenue and possibly their readership base as the technology became slightly more portable. However, the convenience of the daily newspaper as a comprehensive source of news, general information and entertainment, with readability, portability and flexibility, appeared likely to sustain it for a long period. Many of the early electronic print services did not catch on.

The growth of newspapers in the 1980s came to an end following the advent and widespread use of the Internet in the 1990s.