Born in Lewiston, Maine, Ernie Coombs got his start in community theatre after studying art at Vesper George School of Art in Boston. Coombs spent four summers playing small roles at the Boothbay Playhouse in Boothbay, Maine, where he also helped with set design and construction as well as stage managing.

Coombs made his first foray into television when the owners of the Boothbay Playhouse hired him to do a pilot. After CBS rejected it, Coombs pursued odd jobs in theatre and construction. He got his first break when Pittsburgh’s WQED-TV, America’s first educational television station, offered him a job as a puppeteer on the new program Dimple Depot. He worked on the show until it was cancelled in 1962.

At WQED, Coombs met Fred Rogers, who was working on another program at the station, The Children’s Corner. Rogers based his approach on the science of childhood development and demonstrated to Coombs how children learned best when delivery was slow, simple and repetitive. Rogers’s philosophy mirrored the Canadian Broadcasting Corporation’s own research into children’s programming, and in 1963 the CBC hired Rogers to head the children’s show Misterogers. Rogers asked Coombs to join him on the show as a puppeteer. After the show’s first season, Rogers moved back to Pittsburgh and in 1968 launched the wildly successful Mister Rogers' Neighborhood on PBS. However, upon leaving the CBC, Rogers recommended that the broadcaster develop a show around Coombs. 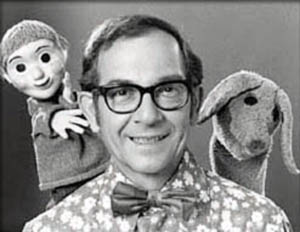 Ernie Coombs as Mr Dressup, with his puppets Casey and Finnegan.

Coombs introduced the character of Mr. Dressup on the CBC children’s program Butternut Square (1964–67), one of the first Canadian series developed specifically for preschool children. Coombs was cast as the lead, rather than the puppeteer. He coined the moniker “Mr. Dressup” to describe the frequent costume changes he made in each episode.

Butternut Square aimed to teach children about the world. It featured Mr. Dressup in a variety of stories told in a playful mix of fantasy and reality. The show presented slow-paced plots about everyday life rather than the mindless violence and stereotypes that comprised much of children’s programming at the time. The action of Butternut Square favoured dances, games and songs that educated children while encouraging participation. The sketches featured Mr. Dressup alongside a rotating cast of human characters and puppets. The humans included fellow guide Sandy (Sandra Cohen), who would meet Mr. Dressup in the fictional town’s Butternut Square, dancer The Music Man (Doug Hines), and occasionally Mr. Rogers. Among the puppet characters were a four-year-old child named Casey and his floppy-eared dog, Finnegan, both of whom were performed by puppeteer Judith Lawrence.

The CBC cancelled Butternut Square for budgetary reasons and aired the last episode in February 1967. However, the network faced considerable public backlash for terminating a popular program that so successfully fulfilled the mandate of a public broadcaster.


Coombs and Lawrence pitched CBC a leaner alternative to Butternut Square, and Mr. Dressup went on the air almost as soon as Butternut Square went off. Premiering on 13 February 1967 and broadcast Monday to Friday at 10:30 a.m., the program centred solely on Mr. Dressup, with minimal puppets, notably Casey and Finnegan, guided and voiced only by Lawrence rather than a costly team of puppeteers. (Finnegan spoke only by whispering in Casey’s ear.) They also simplified the production by featuring only one story per episode and having the action take place at Mr. Dressup’s house, the set for which consisted of a couch, shelves of toys, a kitchen, and French doors that opened outside. Mr. Dressup regularly stepped outside to visit Casey and Finnegan in their tree house and occasionally stopped by the trading post operated by Alligator Al. Children also enjoyed Mr. Dressup’s interaction with Wise Old Owl, a plywood cut-out character on the wall. Coombs would voice the character while the camera zoomed in on the image.

The centrepiece of Mr. Dressup’s home, however, was the Tickle Trunk. A large red steamer trunk with bright flowers and a big rounded lid, the Tickle Trunk sat in the middle of Mr. Dressup’s room. It contained a boundless supply of colourful costumes (all made by Coombs) that helped children enter a world of make-believe. Costumes ranged from conventional uniforms, like a doctor or police officer, to eccentric outfits like a six-armed spider. Mr. Dressup sometimes surprised his viewers by struggling to open the Tickle Trunk. Whenever it was being fussy, he would perform a song and tickle it to coax open the lid. 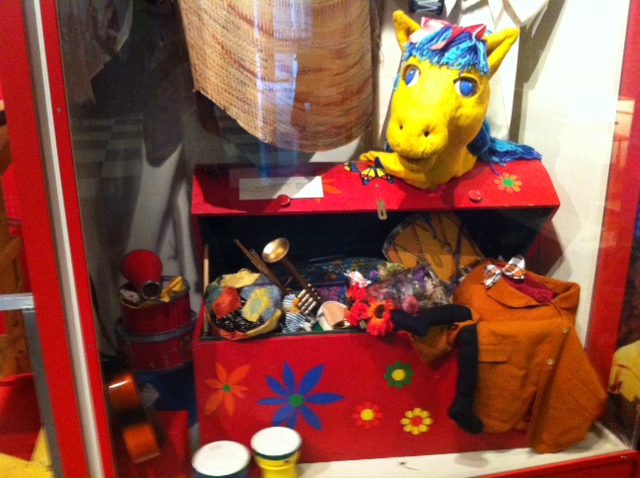 Mr. Dressup's tickle trunk at the CBC Museum in Toronto.

Mr. Dressup’s costumes helped establish the tone for each episode, which generally featured simple stories that inspired children to use their imaginations. Action featured songs, easygoing interactions between Mr. Dressup, Casey, Finnegan and the occasional guest, drawing lessons, and arts and crafts. Mr. Dressup’s craft lessons incorporated household items that children from all income brackets could have at their disposal, like egg cartons, shoeboxes and string. Coombs and the show’s producers tailored this approach specifically to ensure that all children could participate and feel included. Writers kept Mr. Dressup simple and recycled material within the range of references that fit a preschooler’s comprehension. Mr. Dressup generally aired four new episodes per week and a rerun Fridays to allow for a break in the fast-paced production.

Mr. Dressup faced a mild scare in 1969 when Sesame Street debuted. The American children’s series featured the higher energy and faster pacing of commercial-driven television, and led some in the industry to think that Mr. Dressup would end. However, Coombs kept to his successful formula. Mr. Dressup remained strong and often surpassed Sesame Street in the ratings in Canada.

Mr. Dressup featured a major changeover when puppeteer Judith Lawrence retired in 1989 citing concerns over children’s television becoming too commercial. Lawrence’s retirement involved phasing out Casey and Finnegan over time and slowly introducing their replacements to avoid traumatizing children with their sudden departure. Mr. Dressup explained Casey and Finnegan’s absence by saying they went away to kindergarten. The puppets introduced to replace them included Chester the Crow, Lorenzo the Raccoon, Granny, Annie and Truffles. Each puppet had its own puppeteer, including Jim Parker, best known as Polka Roo on The Polka Dot Door. Parker voiced the puppet Alex after spending years as a musician on the show.

Mr. Dressup remained popular throughout the duration of its run and filmed its final episode on 14 February 1996. The show differed from many series in that the finale didn’t resemble an ending. Coombs opted not to tell the audience it was the last episode, though he ended it by modifying his usual sign off, saying, “We end each show by saying, `We have to go now. We`ll see you again soon.’ This last time that will be a lie.” Reruns began immediately and continued until CBC took Mr. Dressup off the air in 2006, citing declining ratings and a desire to create new children’s programming.

Mr. Dressup provided an alternative for audiences outside of the comedic violence that characterized children’s programming. It resisted the elements of commercialization and overstimulation that many feel cheapened its contemporaries. Unlike other children’s programs, the segments of Mr. Dressup didn’t serve simply to introduce cartoons. The show taught children to enjoy simple pleasures and be resourceful. Coombs showed parents and young viewers how they could expand their imaginations and find adventure in everyday life. While the show was often safe in its content and delivery, its wholesomeness was part of its appeal. When a camera operator once asked Coombs if he felt foolish playing dress-up on TV, he simply replied that he was doing what any father would do for his own children.

The show advanced children’s programming by understanding the research of the era and tailoring the delivery to encourage education. Drawing upon his experience with Fred Rogers, Coombs addressed viewers directly to convey the sense that Mr. Dressup respected them personally, rather than using the more anonymous and generic “boys and girls” approach favoured by other shows.

Mr. Dressup extended its respect for children’s intelligence to their relationships with the puppets. Casey, for example, was gender-neutral. Puppeteer Judith Lawrence avoided assigning Casey a gender in order to be more inclusive. Whenever fans inquired about Casey’s gender, Coombs and Lawrence would ask fans what they thought Casey’s gender was and confirmed it, regardless of the answer.

Mr. Dressup entertained and inspired children across Canada for three decades. Its viewership reached roughly 500,000 per episode and 90 per cent of its target audience during its peak. One could attribute some of its success to the lack of options for children’s entertainment on Canadian television, though its influence is evident in other children’s shows such as Polka Dot Door and The Big Comfy Couch.

Coombs received several honours for advancing children’s entertainment, including the Earle Grey Award for lifetime achievement from the Academy of Canadian Cinema and Television in 1994, the Order of Canada in 1996, and a posthumous induction into the Playback Canadian Film & Television Hall of Fame in 2009. Mr. Dressup’s legacy was preserved at the CBC Museum in Toronto, where both the Tickle Trunk and Casey and Finnegan’s treehouse were on display in the public foyer until the museum was closed in December 2017. When Coombs died on 18 September 2001, the House of Commons acknowledged his passing as Members of Parliament expressed gratitude for his dedication to creating positive images for children on television. 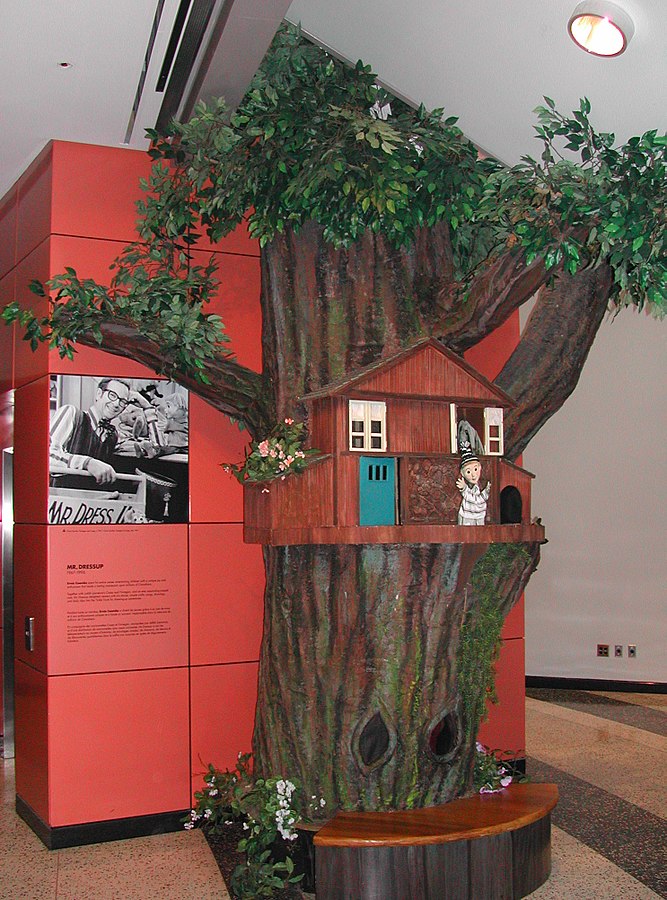 The treehouse set from the children's show Mr. Dressup, at the CBC Museum in Toronto.

#CanadianTVBracket and Canada’s Walk of Fame

Mr. Dressup proved its impact on Canadian audiences when it topped a 2017 online public vote to determine Canada’s “Most Memorable (English) TV Thing” — aka the #CanadianTVBracket. The challenge, created by CBC journalist Justin McElroy, pitted 64 Canadian television programs against one another in a series of elimination matches in which users selected their favourite. Mr. Dressup dominated the Children’s Bracket by capturing 93 per cent of the vote against The Edison Twins in the first round, 75 per cent of the vote against Reboot in round two, 79 per cent against The Raccoons in round three and 75 per cent against The Friendly Giant in round four.

Mr. Dressup advanced to the final four to compete with the winners of each bracket. It beat Historica Canada’s Heritage Minutes with 70 per cent of the vote, and handily defeated The Kids in the Hall in the final round. It took the title of Canada’s Most Memorable TV Thing with more than 400,000 votes cast in its favour. In her argument for why Mr. Dressup should win, CBC’s Karin Larsen wrote, “Mr. Dressup helped millions upon millions of Canadian children make what can be a scary thing — starting school — a much happier experience.”

The win inspired a campaign, originating from Coombs’ family, to get Mr. Dressup a star on Canada’s Walk of Fame. A swell of support followed from fans arguing that Mr. Dressup was long overdue. The Walk of Fame responded by saying that Coombs would go to the top of their list to receive a star for entertaining and inspiring Canada’s children. He was inducted into the Walk of Fame as Mr. Dressup in 2019.