This article was originally published in Maclean’s magazine on July 31, 1995. Partner content is not updated. 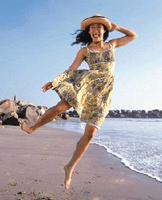 In Double Happiness, Vancouver director Mina Shum's extraordinary feature debut, one of the most touching scenes involves an audition. The movie's heroine, a Chinese-Canadian named Jade (Sandra Oh), is testing for a bit part as a waitress in a TV drama. Facing a tribunal of film-makers in an austere warehouse space, she gamely reads her two lines: "Anything to drink with that?" and "Would you like gravy with your fries?" The director suggests she try it with an accent. "What kind of accent do you want me to do, a Parisian accent?" Jade asks, with a smile and a sassy French inflection. The director looks back at her in stony silence. Chastened, Jade apologizes and gives him what he wants. "Yes," she says, lowering her gaze and looking suddenly docile, "a very good Chinese accent I can do for you."

Both the star of Double Happiness and its writer-director have lived through such auditions in real life. Sandra Oh, 24, and Mina Shum, 29, both grew up in Canada. But, as struggling actors of Asian descent, they became all-too-familiar with the rituals of ethnic casting. Their careers crossed paths, serendipitously, in 1991. Shum and Oh were among 2,000 Asian actors who auditioned for the title role of a teenage prostitute in the CBC-TV drama The Diary of Evelyn Lau. Oh won the part - a huge break for her - while Shum landed a minor role as Lau's social worker. The two finally met on the set in Vancouver. By then, Shum was looking for someone to star in Double Happiness, her semi-autobiographical tale of a Chinese-Canadian girl at odds with her parents. In Oh, a first-generation Korean-Canadian, she found a remarkable talent - and an alter ego whose experience echoed her own with uncanny fidelity.

Like Jade in Double Happiness, both Shum and Oh were torn between two cultures as teenagers. Defying their parents' wishes, both left home at 18 to pursue theatrical ambitions. And now, their careers have converged with the kind of magic that happens only in the movies. As a bittersweet coming-of-age comedy, Double Happiness is a variation on one of the most overworked genres in Canadian cinema. But it seems utterly fresh and innovative - and not just because it unveils a previously uncharted corner of the cultural mosaic. Yes, Shum is the first Chinese-Canadian woman to direct a widely released feature film. But her real accomplishment is that she has broken with a drab tradition of coming-of-age realism to create a witty, vividly stylish portrait of the artist as a young woman.

Produced for just $1 million, Double Happiness is living up to the good fortune suggested by its title. It has won awards at film festivals in Toronto and Berlin, as well as two Genies (including Best Actress for Oh's performance). And this week, the movie opens commercially in both Canada and the United States, a rare departure from the usual pattern of Canadian films trickling down to American audiences long after their Canadian run. Double Happiness has received strong advance praise from U.S. critics, and Fine Line Features, its American distributor, is aggressively promoting Shum as a hot, new independent film-maker.

Last week, during a blitz of back-to-back interviews in New York City, Shum was still reeling from the Cinderella story of the film's success. "Pinch me," she said, "I'm still playing emotional catch-up. I'm staying at this designer hotel, the Paramount, a place I could never afford to stay in myself. Yesterday, I did a Village Voice photo shoot lying on my bed in lingerie. And we just got an RSVP from [the Basketball Diaries star] Leonardo DiCaprio for the L.A. première - I can't believe these people want to see my movie."

Double Happiness has terrific charm, much of which emanates directly from Oh's complex and candid performance as Jade. The film is told entirely from her point of view, right from the opening scene, in which she talks directly to the camera against a lipstick-red backdrop: "I said I would never make a big deal out of being Chinese," she begins, introducing her family. "They're very Chinese, if you know what I mean. But for the moment, just forget they're Chinese. Just think of them as any old white family. Though you could probably just turn on a TV set and see that. I grew up wondering why we could never be the Brady Bunch. The Brady Bunch never needed subtitles."

In fact, the family dialogue flips naturally back and forth between English and subtitled Cantonese. The film's simple narrative revolves around Jade's growing estrangement from her parents as they discourage her acting ambitions and try to marry her off to a Chinese lawyer. Jade leads a double life. She falls for a nice white boy named Mark (Callum Rennie), sleeping with him the same night they meet outside a club. The affair drives a rift between Jade and her father, played by martial-arts actor Stephen Chang, whose wooden portrayal of repression serves as the movie's one major false note. And all the characters seem a little flat compared with Jade.

But on the whole, the film's family portrait rings true, perhaps because it is so close to the director's own family. Just like Jade, Shum grew up with a younger sister, an older brother, a protective mother and a strict father who worked as security guard. Shum, who emigrated from Hong Kong with her family when she was nine months old, grew up in Vancouver. She spent five of her teenage years working part-time in a McDonald's restaurant. "When I was 18, I moved out, and it was the hardest thing I ever did," she recalls. "I was taught all my life that until I 'married out' I should not move out. And yes, there was a Caucasian boy. But it was more that I wanted to be an artist. They would have been happy if I'd stayed at McDonald's."

While studying film and theatre at the University of British Columbia in Vancouver, she was estranged from her parents. "My father wouldn't speak to me," she recalls. Since then, they have reconciled. Her parents, who played bit parts in Double Happiness, "were shocked when they saw the film," says Shum. "It was the first time they knew how I felt. But now they're very proud of their daughter. My father sees me as a successful entrepreneur."

Even after earning a BA in theatre and a diploma in film production and then training as a director at the Canadian Film Centre in Toronto, Shum maintains that she learned the basics of film-making from selling burgers at McDonald's. "It taught me the importance of being able to multi-task," she says, "cleaning while you go, smiling, knowing how many Big Macs are on the grill, knowing there's toilet paper in the bathroom, dealing with a lineup in the drive-through."

During the 30-day shoot of Double Happiness, she was occasionally overwhelmed by the complexity of the task she had assigned herself. The movie includes a lazy-Susan shot of Jade's family at dinner, with the camera at the centre of the table, swivelling through 360 degrees to track their conversation. It was extremely demanding for a novice director. "I never should have done that the first time out," she says. "I remember coming on set crying because I didn't think I could do it."

But Shum was determined to make a movie with a strong visual signature. "I saw this film as a portraiture in large geometric shapes and candy colors," she says. "You should be able to squint your eyes and it will be like a poster graphic. I really wanted to make art. I'm so sick of reality - television does reality all the time."

Now, with Double Happiness behind her, Shum is hoping to up the ante with her next movie, Drive, She Said. She has written the script and is waiting for funding. "It's a romantic comedy about falling in love with yourself," Shum says. She wants Sandra Oh to star, as a bank teller on the lam with a thief who takes her hostage. "It's about our generation at the close of the millennium - do we take the traditional path to adulthood, or do we carve out our own space?" Shum, it seems, has made up her mind - to go for double or nothing.