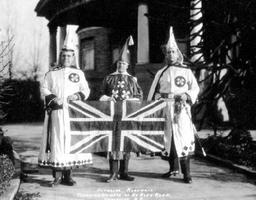 Vancouver, 1925. The ultraconservative, secret fraternal organization dedicated to the supremacy of an Anglo-Saxon Protestant society was formed in Pulaski, Tenn (courtesy City of Vancouver Archives/CVA-99-1946).

The Ku Klux Klan is an outlawed, racist, ultra-conservative, fraternal organization dedicated to the supremacy of an Anglo-Saxon, Protestant society. Although never successful across Canada, the Klan was briefly popular in Saskatchewan in the 1920s.

The Ku Klux Klan (the name comes from the Greek word kyklos, or circle — "Kyklos Klan") was formed in Pulaski, Tennessee, in November 1865 by six ex-Confederate soldiers of the American Civil War. It was outlawed in the United States in 1871 because of violent and outrageous crimes against blacks and northerners, including murder and lynching.

Revived in November 1915 in Atlanta, Georgia, the "KKK" drew its support from middle- and lower-class Americans who feared the loss of conservative and rural values.

Klan members typically signalled their presence by burning a Christian cross. Their doctrines and violence were motivated by racial and religious hatred.

In 1921, the Klan was reported active in Montréal; by 1925, "klans," or local branches, had been established all across Canada.

Like their American counterparts, Canadian Klansmen had a fanatical hatred for all things Roman Catholic and feared that the purity of the Anglo-Saxon race was being jeopardized by new immigration. Moreover, they were not averse to committing crimes to achieve their goals.

The Klan appealed to few Canadians and remained relatively obscure, except in Saskatchewan. American organizers stole approximately $100,000 of Klan funds from the Saskatchewan branch in 1927. The Saskatchewan organization regrouped and, at its height in the late 1920s, boasted having 40,000 members.

In the 1929 provincial election, the Klan's influence helped end 24 years of Liberal rule in Saskatchewan, with the defeat of Liberal Premier J. G. Gardiner by Conservative leader J.T.M. Anderson.

In the decades that followed, the Saskatchewan Klan declined rapidly, as did the organization in the rest of Canada. In the late 1970s, the Klan attempted once more to organize in Canada, notably in Ontario, Alberta and British Columbia.

The organization's avowed white-supremacist stance, and further crimes committed by the American Klan during this period, have done little either to increase membership or to establish the Klan's credibility in the eyes of the Canadian public.

Today the Klan has a fringe, underground following by members of some white supremacist groups.

Ukrainian Settlement in the Canadian Prairies