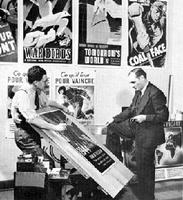 John Grierson, film producer (b at Deanston, Scot 25 Apr 1898; d at Bath, Eng 19 Feb 1972). His ancestors were lighthouse keepers and his father was a school teacher. He served as an ordinary seaman in WWI and completed a brilliant academic career after the war, graduating with distinction in moral philosophy.

On a Rockefeller scholarship to the University of Chicago, Grierson began his lifelong study of the influence of media on public opinion. In Hollywood to study film, he befriended the American filmmaker Robert Flaherty, whose haunting film Nanook of the North celebrated the daily survival of an Inuit hunter. In a 1926 review of one of Flaherty's films, he coined the term "documentary" to describe the dramatization of the everyday life of ordinary people.

Grierson returned to England in 1927, intrigued with the idea of applying Flaherty's technique to the common people of Scotland. In his first film, Drifters (1929), the silent depiction of the harsh life of herring fishermen in the North Sea revolutionized the portrayal of working people in the cinema. Grierson decided to devote his energies to the building of a movement dedicated to the documentary aesthetic and directed only one more film.

In 1938 the Canadian government invited Grierson to come to Canada to counsel on the use of film. Grierson prepared a report and on his recommendation King created the National Film Board (NFB) in May 1939 and appointed Grierson its first commissioner in October 1939.

With the outbreak of war, Grierson would use film to instill confidence and pride in Canadians. He was at the same time general manager of Canada's Wartime Information Board and thus had extraordinary control over how Canadians perceived the war. He imported talented filmmakers such as Norman McLaren. In film series such as Canada Carries On and The World in Action, he reached an audience of millions in Canadian and American cinemas. By 1945 the NFB had grown into one of the world's largest film studios and was a model for similar institutions around the world.

Grierson's emphasis on realism had a profound long-term influence on Canadian film. "Art is not a mirror," he said, "but a hammer. It is a weapon in our hands to see and say what is good and right and beautiful." Nevertheless, Grierson did not believe that documentary film is a mere public report of the activities of daily life but a visual art that can convey a sense of beauty about the ordinary world.

As the war came to a close, Grierson grew weary of Canadian bureaucrats and resigned. In the panic of suspicion surrounding the infamous Gouzenko spy case in Canada, Grierson was brought before a secret tribunal and questioned about his one-time secretary who was connected to the spy ring. The investigators then threw doubt on Grierson himself for his alleged "communist" sympathies. He moved to UNESCO in Paris, where rising directors such as Rossellini paid him homage. He was soon almost forgotten in Canada. He returned to his native Scotland in the mid-1950s, where he hosted a public affairs program, This Wonderful World, for 10 years.

Grierson was nearly broke when McGill University invited him to lecture in 1968. He began as a curiosity but soon was attracting up to 800 students to his lectures. Indira Gandhi called him to India to find ways to spread the principles of birth control to the villages. Sick with cancer, he returned home to England, where he died at Bath.

Grierson was a firebrand whose single-minded devotion to the principle that "all things are beautiful, as long as you have them in the right order" had a profound influence on the history of film, and on the cultural life of Canada in particular.