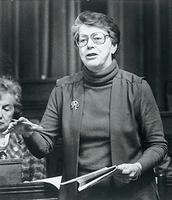 Pauline Jewett during her time as a Liberal MP (courtesy CP).

Pauline Jewett, educator, politician (b at St Catharines, Ont 11 Dec 1922; d at Ottawa 5 July 1992). Educated at Queen's, Radcliffe, Harvard and London School of Economics, she was a professor of political science (1955-74) and head of the Institute of Canadian Studies (1971-74) at Carleton before being appointed president of Simon Fraser University (1974-78), the first woman to head a major coeducational university in Canada.

Jewett was a Liberal MP for Northumberland from 1963 to 1965 and in 1966 she was vice-president of the national Liberal Party. In 1979, 1980 and 1984 she was elected MP for New Westminster-Coquitlam for the New Democratic Party. In Parliament she was NDP critic on education and external affairs, the constitution, federal-provincial relations, arms control and disarmament. Jewett did not seek re-election in 1988. She was an Officer of the Order of Canada. Jewett returned to university life in 1990 to serve as Chancellor of Carleton University until her death. Carleton renamed the Institute of Womens Studies (est 1987) the Pauline Jewett Institute of Womens Studies in 1992.