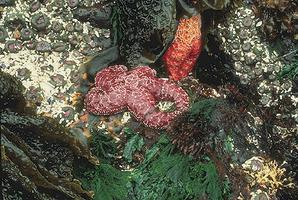 Invertebrates populate all major environments: marine, freshwater and terrestrial; some are parasites in other animals (eg, tapeworms) or plants (eg, golden nematode, scourge of potato crops in British Columbia). Invertebrates may be carnivores, herbivores or omnivores. Some even culture bacteria or plant cells in their tissues (in symbiosis), making use of the by-products. There are invertebrates that swim, float, fly, walk, crawl or burrow, and others that are fixed in one spot. Some of these sessile forms have no power of movement (eg, the glass sponges).

Endless variations exist in the mechanisms whereby physiological functions (respiration, excretion, movement, co-ordination, etc) are carried out. Some groups (eg, insects and nematodes) have developed extraordinarily successful designs. Others, though simple, have endured virtually unchanged for hundreds of millions of years, such as brachiopods.

While invertebrates are conspicuous on land, they are far more so in the sea. The most elaborate of all marine communities, the coral reef, is dominated by invertebrates. Marine plankton includes representatives of all major invertebrate phyla. The copepod crustaceans, in both numbers of species (7500) and numbers of individuals, exceed all the rest of metazoan (multicelled) plankton combined. Some invertebrates, for example crabs, shrimp, mussels, oysters and squid, are of economic importance. While shellfish cannot compete with fish in sheer volume caught, they are important in cash value.

The origins of most invertebrate groups are buried in early geological history. Surprisingly advanced forms, including annelid worms and molluscs, have been found in rocks from the Canadian Arctic dating from the Precambrian period (more than 544 million years ago). Many once-important groups have dwindled; others have become extinct as new forms emerged. Because of the patchiness of the fossil record, it is often hard to decide on evolutionary relationships in different invertebrate groups, but comparison of structure and development of existing forms may give clues to their ancestry. Thus, the annelids and molluscs, though seemingly very different as adults, show remarkable similarities in their development. Specialists are fairly well agreed upon the broad outlines; however, classifications change continually as new facts come to light.

Evidence from molecular biology is increasingly used to clarify phylogenetic relationships. Study of the nucleotide sequences of the genes coding for ribosmal RNA has been particularly important. These genes are similar enough in all animals to be easily compared, but different enough to reveal relationships. Molecular evidence supports the idea that all invertebrates are descended from a single, ancestral, invertebrate group, rather than evolving repeatedly from different protozoan stocks.

Canada's climatic and ecological diversity is matched by an equivalent diversity of invertebrate types. Scorpions and sun spiders live in the hot, dry country around Medicine Hat, ice-worms in the Columbia Icefield; midges and mosquitoes plague the inhabitants of many regions; leeches and flatworm larvae bother bathers in some prairie lakes ("swimmers itch"); starfish and sea anemones delight the eyes of wanderers along the seashore; and the invertebrate fossils of the Burgess Shale have thrown an important new light on the whole question of animal origins.

In Canada research on invertebrates is largely concentrated on insects important to agriculture and forestry: spruce budworm; parasites of fish and domestic animals; edible marine molluscs and crustaceans (shellfish); and zebra mussels, accidentally introduced into the Great Lakes, and now a serious pest, causing blockage of water pipes. Specialists in most of the invertebrate groups are scattered across the country in government laboratories, research institutes and universities. The Biological Survey of Canada (attached to the Canadian Museum of Nature) develops and co-ordinates work on invertebrates, and publishes a newsletter. 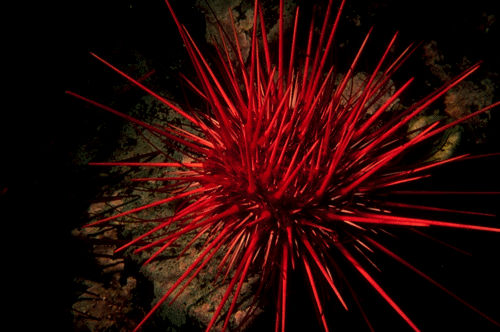