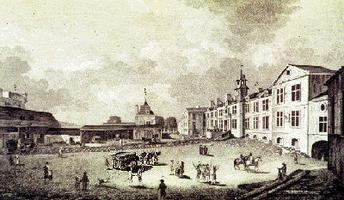 Hocquart was intendant of New France from 1729-48, and he was generally regarded as a good administrator (courtesy Musée Historique de Vaudreuil).
PreviousNext

Second in rank to the governor, the intendant controlled the colony's entire civil administration. He gave particular attention to settlement and economic development, and to the administration of justice. Because he also managed financial matters, he had the most sweeping powers in the colony's government.

Appointed by a royal commission and subject to recall at will, the intendant reported to the minister of marine (see Ministère de la Marine). He ensured that the king's decisions were implemented, appealed to the minister over difficulties with new policies and presented a detailed annual report on the colony. He acted either by direct order or by decree of the Sovereign Council, which he chaired.

Intendants were usually chosen from influential circles outside the nobility and were noted for the competence and care with which they performed their duties. New France's best-known intendants were Jean Talon, Gilles Hocquart and François Bigot.