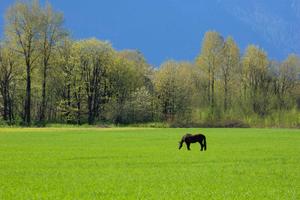 Horse (Equus caballus), herbivorous mammal possessing single toes or hoofs (ie, ungulate), contributing to its speed. Customary gaits are walk, trot, canter and gallop. Horses are friendly, moderately intelligent animals, capable of being excellent helpers and companions for humans. Indeed, the horse can share with the dog the distinction of being man's best friend. Giving more than friendship, horses have for hundreds of years been mankind's most faithful slaves, furnishing muscle and stamina for heavy work in agriculture and endurance to cope with heavy loads on long trails in pioneer transportation.

When forced from traditional occupations by mechanical power, horses were immediately returned to service in new and important roles in sport and recreation. In some parts of the world, horse meat is a common item of diet but Canadians have never shown much interest in eating their best animal friends.

Selection for different purposes led to wide variations and many breeds. In size, for example, the range in height would be from 10-12 hands in the case of some Shetland ponies to 17 hands in certain big breeds. A hand, the horseman's unit in measuring height at the withers, is about 10 cm. More than 25 recognized breeds have been introduced and bred in Canada.

The horse is a pioneer in these parts and should be treated with appropriate respect. With the exception of the turkey, it is the only member of Canada's barnyard community whose family was native to the Americas, and much of the 40-million-year family history is written, convincingly, in the rocks. Fossil evidence of the primitive horse's existence has been found elsewhere, but nowhere is there such a long, unbroken palaeontological record as on this continent. Written here is the step-by-step story of change from the small and primitive Eohippus (the size of a wirehaired terrier) to horses which in size and appearance resemble those of modern times.

The "dawn horse" had 4 toes on each foreleg, 3 on each hindleg. The little fellow, without much means of protection, lived in swamps. There may be doubt about its diet, but from the shape of its feet, the relatively small size of stomach even today and the survival of canine teeth in males, there is reason to suspect that Eohippus was not a strict vegetable feeder.

Members of the race must have been extremely numerous on this continent, at least until struck by disaster and extinction in the Americas. Horses were still here when the first humans arrived (see Prehistory). Early North American humans feasted on horse meat and left the proof at campfire sites, where horse bones, arrowheads and ashes have been found together. Some horses of that period passed from North America to Asia by way of the land bridge that admitted the first humans to this continent. Thus, they escaped extinction and spread across Asia.

It is believed that the first domestication was in China, and eventually domesticated stock reached the Mediterranean and North Africa, where improvement took place. Some of the improved horses, taken by invaders to Europe, were left behind and imprinted their quality upon the horse stock of Spain and France. Columbus, on his second voyage westward in 1493, may have taken Spanish horses to the West Indies. In any case, Hernando Cortez, a Spanish conquistador, landed 16 or 17 horses on the N American mainland in 1519. After a long absence, American horses were back on their native soil.

North American Indigenous peoples were quick to adopt the use of horses, and horses moved from one tribe to another, generally by theft. By Arthur Silver Morton's estimates, horses in the possession of the Indigenous peoples were seen in the valley of the Bow River in 1730. Before long, Indigenous peoples of all the western tribes had horses and, when the Selkirk settlers arrived at the Red River in 1812 urgently needing livestock, they rejoiced at the prospect of obtaining horses from tribesmen.

The first horses in eastern Canada were brought from France for the use of settlers beside the St Lawrence. In 1665, Louis XIV directed the shipment of 21 mares and 2 stallions from the royal stables. From these and later importations came the Québec strain of hardy black horses, ultimately recognized as the French Canadian or Canadian breed, still prized by many Québec farmers.

For settlers coming into Upper Canada and then westward to Manitoba and the Territories, power was one of the most crucial needs. Some used oxen for a while because they were more readily available and could "live off the land," but ultimately every farmer wanted horses and then better horses. Improvement depended on the importation of sires of approved breeds. The first purebred stallion in the West was Fireaway, a Norfolk trotter brought from England by the Hudson's Bay Co for the benefit of Red River settlers. He was an overwhelming success.

"Battle of the Breeds"

Thereafter, demand was for stallions of heavy breeds. British settlers wanted breeds from their homeland (eg, Clydesdale, Shire, Suffolk). Settlers from Europe and the US favoured Percherons and Belgians. Canadian farms became scenes of the mighty "Battle of the Breeds." Reflecting an early predominance of British settlers, the Scottish Clydesdale, with stylish white markings and showy action, led in popularity, but in time the bigger Percherons of French origin and the still bigger Belgians took the lead.

By 1921, when almost every Canadian farmer was a horseman, the horse population stood at 3.5 million. Saskatchewan had one million, mainly of Clydesdale, Percheron and Belgian breeding. The interbreed rivalry continued and reached the point where Clydesdale supporters were known to sit on one side of a country church, while Percheron and Belgian devotees sat on the other.

But while the breed debates continued, the supremacy of heavy horses was being challenged by mechanical power, first by the heavy steam tractors introduced on big farms in the West. These huge steamers were excellent for belt work but slow and awkward for field work, and by 1908, when the world's first agricultural motor competition was held at the Winnipeg Industrial Exhibition, heavy, gasoline-driven tractors outnumbered them.

During the First World War, when farmers were urged to increase production but were denied the needed workers, gasoline and kerosene-driven tractors of smaller kind became attractive. Horse fortunes were about to change.

It was a landmark event in 1918 when the federal government contracted to buy 1000 2-plow Ford tractors and sell them to farmers at cost (about $800 delivered). These light, 4-cylinder, high-speed tractors signalled a new day for farm power and horse breeding slumped. More and more horses were unemployed and seen as surplus.

By 1944 farmers and ranchers were becoming impatient with the thousands of unsalable horses eating valuable grass. In March, at a meeting held at Val Marie, Sask, the Western Horse Marketing Co-operative was organized, with a double purpose: horsemen hoped to realize a return from the surplus and to make more grass available for cattle and sheep.

By October 1945, horsemen were in the meat business, with their gaze fixed upon postwar food needs in Europe. Slaughtering and processing plants were established at Swift Current, Sask, and Edmonton, and by 1952 officers could report almost 250 000 horses marketed for a return of about $19 million. Most of the return came from canned meat shipped to Europe. In 1986 horse-meat exports totalled over 17 000 t, valued at $41.1 million. Principal buyers were France and Japan. Usually, old or crippled animals are slaughtered; horses are not bred for the purpose.

The Ascendancy of the Light Horse

Heavy horses almost disappeared from Canadian farms; horse-drawn machinery was abandoned; harnesses went to pieces. Familiar old terms such as hame strap, martingale and whippletree were forgotten. But all was not lost. With the decline of the heavy or draft horse and the coming of an age when people had more leisure, Canadians discovered new interests in light horses.

The ascendancy of light horse breeds was no less dramatic than the decline of heavy ones. Every type and breed of light horse was useful to some degree. A few, such as the western stock or cowboy horse, were so useful and so irreplaceable that their popularity has never changed. But the search for horses suitable for new sport and recreational uses brought a score of little-known breeds to public attention.

The 2 ancient breeds, Arabian and Thoroughbred, have been influential in building and improving other breeds, which include the Hackney, French Coach and German Coach, classified as heavy harness types; American Standardbred and Morgan, seen as roadsters or trotters; American Saddle Horses, Tennessee Walking Horses and Quarter Horses, all of US origin; and the recently popular colour breeds, Palomino, Appaloosa, Pinto and Buckskin. Various pony breeds (eg, Shetland, Welsh, Dartmoor, Exmoor, Fell, Highland, Iceland, New Forest) have been registered.

Horse racing is known as "The Sport of Kings" (see Thoroughbred Racing). A succession of English kings gave it their enthusiastic support and Charles II went so far as to order importation of 40 Barb, Turk and Arab mares which became the foundation of the Thoroughbred breed. Every urban centre has its racetracks and seasonal racing programs. Thoroughbreds and Standardbreds are the principal racing breeds, the former in flat racing under saddles, the latter in harness racing, with drivers seated in sulkies.

The Standardbred, developed in the eastern states, was the original American roadster, a trotter that might be trained to pace. The trotting gait is a diagonal movement, with diagonally opposite legs advancing together. The pace, which some horses do naturally and others by training, is a lateral gait, with both legs on the same side moving together. Good horses with either gait can cover a mile in under 2 minutes.

Light-horse shows became numerous and popular and the Canadian Horse Shows Association furnished uniform rules for contests. Over the years, Canadian horses made many notable records, for example that of the jumper Confidence in the East and Barra Lad in the West. The former, owned by Sir Clifford Sifton, cleared the bars at 245.11 cm at an Ottawa show to establish a world's record, and the latter, foaled at Essondale, BC, and exhibited by Peter Welsh of Calgary, made the incredible jump of 247.65 cm for 6000 spectators at New Westminster in 1925. It was a new world's record but ended tragically; the great horse died later the same evening.

Canadian horse shows reached their highest state of competition and glitter at the Royal Agricultural Winter Fair in Toronto, started in 1922. In the West, the excellent facilities of Spruce Meadows, near Calgary, have become internationally important. Among the many other light-horse events are rodeo, which reaches its pinnacle at the Calgary Stampede, and trail riding in mountain regions, started in an organized way by John Murray Gibbon after his arrival in Canada in 1913. Dressage attempts to present the art of training with show-ring finish. For the friends of the Quarter Horse and lovers of stock saddle events, there are the cutting-horse contests. 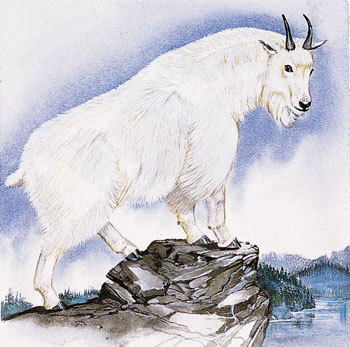