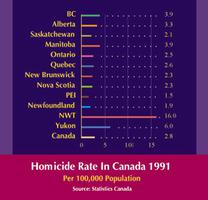 Canadian law recognizes 3 types of culpable homicide: murder (1st and 2nd degree), manslaughter and infanticide. Murder is the killing of one human being by another with malice aforethought; infanticide is the killing of a newborn child by its mother; and manslaughter, which includes the lesser offence of criminal negligence, is any homicide that is neither murder nor infanticide. First degree murder now consists of 4 forms of homicide: murders that are planned and deliberate, murders of police or custodial officers killed in the line of duty, murders committed in the course of specified criminal acts (hijacking, sexual offences or kidnapping) or murders committed by a person who has been convicted of first or second degree murder. Second degree murder now constitutes all other murders.

Firearms have accounted for about one-third of all homicides since 1979. In 1996, 211 homicides were committed with a firearm, 35 more than in 1995. Homicides, however, account for a relatively small portion of firearm deaths. The latest figures available (1995) show that about 80% of all firearm deaths were due to suicide. The use of handguns in all homicides has increased over the past decade (from 7% to 17%) while the use of rifles/shotguns has decreased (from 20% to 13%). In 1996, a further 31% of homicide victims were stabbed and 22% were beaten.

Males are victims in two-thirds of homicides and represent 9 of 10 accused. 15 - 34 year olds are over-represented (70% of accused fall in this age group but comprise only 30% of the population). An average of 49 youths are charged with murder each year, or 9% of homicide suspects annually, close to their proportion in the population at 8%.

In 1996 police reported that 38% of homicide victims had consumed alcohol or drugs or both at the time of the offence. This pattern has remained consistent since 1991, when this information was first collected.

In Canada the murder of police officers in the line of duty is relatively rare. Since 1961, an average of 3 police officers have been murdered while performing their duties each year. None was killed by a firearm. In comparison, 53 police officers were killed in the United States, and all but 4 were killed with a firearm. One of the highest risk occupations is prostitution. In 1996, 10 known prostitutes were killed. It is likely that this figure under-represents the actual figure. Only those incidents where the police were certain that the victim was killed in the course of engaging in prostitution-related activities were counted.

The causes of homicide and of varying homicide rates in different nations remain unclear, although various and usually contradictory theories ascribe both to biological, psychological or sociological factors. LAW REFORM, such as it is, appears to have little or no effect on reducing homicide. Whether the reform involves the abolition or restoration of CAPITAL PUNISHMENT, the restriction or distribution of firearms, or lowering the level of brutality in prison life (see PRISON), the proponents of either side typically conduct their arguments from emotional or moral positions without reference to objective analysis, an unsatisfactory state of affairs that will undoubtedly continue.