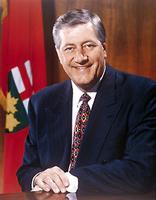 Mike Harris was born in Toronto, but grew up in North Bay, Ontario, where his father owned a welding supply business and then ran a fishing camp, the Wasi Falls Resort. In 1965, he attended Waterloo Lutheran University (now Wilfrid Laurier), but dropped out after one year. At 21, he moved to Ste-Adèle in the Laurentians (in Québec), where he worked as a ski instructor for two years. In the 1970s, he obtained a teaching certificate and taught elementary grades at W.J. Fricker Public School in North Bay while helping run the family fishing camp in the summers and working as an instructor at their ski hill on winter weekends. Harris soon gave up teaching and worked full time in the family businesses until the ski hill was sold to developers. He then managed a local golf course, the Pinewood Golf Club.

Harris’s political career began in 1974 with his election as a school board trustee. From 1977 to 1981, he served as board chair. In 1980–81, he also served a term as president of the Northern Ontario Trustees Association. In 1981, Harris entered provincial politics, unseating incumbent Liberal MPP Mike Bolan in the Nipissing riding.

A backbencher for his first term, Harris allied himself with Frank Miller, who became party leader and premier in 1985. Harris held two cabinet posts in Miller’s government, Minister of Energy and Minister of Natural Resources. However, the Miller government lasted only two months before being replaced by a Liberal-New Democratic Party (NDP) coalition. Harris was re-elected in his riding in 1987 and served as shadow critic for various ministries, including revenue, labour and northern development. He then became the Progressive Conservative house leader in the legislature.

While the Progressive Conservatives were generally considered a centrist party, Harris was one of a group of younger conservative activists. In May 1990, he won the party leadership, defeating Dianne Cunningham. Not long after, Harris retained his seat in the 1990 provincial election that brought Bob Rae’s NDP to power.

In the early 1990s, Ontario suffered a severe recession, and, by the 1995 election, the NDP government was deeply unpopular, in part owing to policies such as the Social Contract, which mandated wage cuts in the civil service. In 1994, Harris and the Progressive Conservative (PC) Party unveiled a set of small-government “reforms” or policy planks they called the Common Sense Revolution, promising “lower taxes, less government and 725,000 new jobs in Ontario.”

Harris performed authoritatively in a televised leaders’ debate during the 1995 provincial election, which helped the PCs win a majority on 8 June 1995, taking 82 of 130 seats.

The Harris government set out to implement the strategy planks of the Common Sense Revolution, cutting income taxes by 30 per cent and social assistance rates by 21.6 per cent. Through the Social Assistance Reform Act (1997), the government also introduced the Ontario Works program, which required welfare recipients to be placed in jobs or training whenever possible. The Ontario Works program, also known as “workfare,” was extremely unpopular with anti-poverty activists.

The new government also cut health spending, laying off thousands of nurses and closing hospitals. Some felt the consolidation of services and hospital mergers were overdue, while others protested the changes.

The Harris government also made significant changes to Ontario’s education system. Such legislation as Bill 160, the Education Quality Improvement Act, changed funding structures, instituted standardized testing, reduced school board powers, eliminated the fifth “OAC” year of high school and instituted “teacher testing,” which examined the abilities of teachers. The legislation pitted the province’s teaching profession against the government, leading to a teacher’s strike in 1997.

In 1996, the Harris government passed the Public Sector Salary Disclosure Act, which quickly became known as the “sunshine list.” The list discloses public sector salaries over a certain amount ($100,000 per calendar year when introduced) and was designed to make “Ontario’s public sector more open and accountable to taxpayers.”

Harris and the PC Party also tried to streamline provincial and municipal governments. The Fewer Politicians Act (1996) reduced the number of MPPs from 130 to 103 by redrawing riding boundaries to correspond to federal electoral districts. Bill 103, the City of Toronto Act (1997), amalgamated the former boroughs of Toronto, York, North York, Etobicoke, Scarborough and East York into one entity, with the aim of streamlining government and cutting costs. The same rationale was applied to other municipalities around the province (e.g., City of Hamilton Act, 1999; City of Ottawa Act, 1999).

The Harris government also cut infrastructure spending and tried to sell provincial utilities. In October 1998, the government passed the Energy Competition Act.This restructured Ontario Hydro into separate entities by transmission and delivery, generation, and price management, with the ultimate goal of privatization. The following year, the government sold toll Highway 407 to a private group for $3.1 billion.

In 1999, the Harris PCs were re-elected with a second majority, winning 59 seats in the reduced 103-seat legislature, with the Liberals at 35 seats and the New Democrats at nine. In his second term, Harris’s government continued its focus on education, health care and balancing the budget. In 2000, the Ontario Health Services Restructuring Commission released a report on the future of health care in the province, recommending further restructuring to implement efficiencies in the delivery of health services. In 2001, the government announced that private schools (both secular and religious) would have access to tax funding. The government also introduced “Ontario’s Living Legacy,” a land management plan that added 378 protected areas to Ontario’s park system.

The government was not as active in terms of significant legislation as it had been during Harris’s first term; this period is probably best known for the Walkerton crisis and the Queen’s Park riot.

Harris resigned his office in 2002, citing personal reasons (though declining popularity was cited by critics), and was replaced by Minister of Finance Ernie Eves.

Analysis of Harris’s career as premier is divided along ideological lines, with conservatives hailing the Common Sense Revolution as “pulling Ontario back from a potentially ruinous fiscal path,” while the political left decried his actions as a desire to “destroy and destroy some more” by choosing cost-cutting over provision of an adequate level of social services. The Harris government proved to be one of the most controversial in the province’s history due to its aggressive pursuit of fiscal conservatism, measures actively opposed by a number of unions and social organizations.

Harris’s first battles came with nurses, as medical spending was one of the first issues tackled by his government. In response to the loss of nursing jobs, Harris compared nurses to obsolete hula-hoop makers: “Just as hula hoops went out and those workers had to have a factory and a company that would manufacture something else that’s in, it’s the same for government.” Harris’s hula-hoop comment was widely reported and infuriated nurses and their supporters.

Changes to the education system led to the bitter teachers’ strike of 1997, which was fought over such issues as cutting teacher prep time and giving greater power to government in dictating class sizes and tax rates. Such changes were widely seen as decimating local power over education.

Anti-poverty activists and charities considered Harris insensitive and uncaring toward welfare recipients, pointing to the Ontario Works program, which emphasized cutting costs as well as training and work for compensation.

Tension between the government and anti-poverty activists came to a head with the Days of Action, protests and strikes that took place between 1995 and 1998. The most infamous anti-government protest occurred in 2000 at Queen’s Park, organized in part by the Ontario Coalition Against Poverty. The protest turned into a clash between police and protesters, with accusations of brutality and violence on both sides. Dozens were injured during the riot, and over 40 people were charged.

Under the Harris government, Ontario passed legislation (including the City of Toronto Act of 1997 and the Municipal Act of 2001) that amalgamated smaller municipal government units into larger single units, both in cities like Toronto and Ottawa and smaller, more spread-out communities like New Liskeard, Haileybury and Dymond, which combined to become the city of Temiskaming Shores. The newer system has been accused of producing large, unwieldy structures that are unreceptive to the needs of their residents. Moreover, a 2015 Fraser Institute study concluded that, “there was no tangible, financial benefit from amalgamation.” Despite criticism of amalgamation, the following McGuinty and Wynne Liberal governments have not reversed it.

The Harris government also downloaded a number of social services to municipal governments, including affordable housing. The transfer put significant strain on municipalities, which struggled to pay for these services through increased property taxes and the diversion of funds from other city services.

One of the most damaging controversies of Harris’s two terms in office was the Ipperwash Crisis. During the occupation of Stoney Point by Indigenous protesters, Dudley George, a protester, was shot and killed. An inquiry found that police and several levels of government handled the conflict badly, without sensitivity for Indigenous concerns. Harris himself was infamously quoted as saying, “I want the f—king Indians out of the park,” a statement he denied making.

Possibly the most trying controversy of Harris’s government came in 2000, when the water supply of the town of Walkerton was compromised by E.coli contamination. Roughly half the population of the town fell ill, and seven people died. In October, a public inquiry was launched, during which Dr. Murray McQuigge, regional medical officer of health, suggested that the privatization of water-testing labs and government cutbacks were partly at fault. This was echoed in the 2002, report by Justice Dennis O’Connor, who headed the inquiry. O’Connor found that cutbacks had affected the ability of the environment ministry to identify and respond to problems, and that the government should have required water-testing laboratories to immediately report adverse test results to the medical officer of health and the ministry of the environment.

Finances and the Deficit

The Common Sense Revolution was intended to achieve balanced budgets for the province, and “small government” that saved taxpayers money was unquestionably its aim. However, the loss of tax revenue under Harris has been blamed for a significant increase in debt, up to 30 per cent, by the time the PC government left power. The government’s selling of the 407 toll highway to pay off part of the debt was derided in many quarters as a massive public loss and a failure in the management of public infrastructure. However, Harris’s supporters point to balanced budgets and lowered corporate and personal income taxes as significant successes and necessary steps to return money to taxpayers and rein in uncontrolled government spending.

Since resigning as premier in 2002, Harris has kept a low profile in electoral politics.

In 2002, Harris joined a conservative think tank, the Fraser Institute, as a senior fellow, penning the policy document series A Canada Strong and Free with Preston Manning. From 2002 to 2010 he served as senior business advisor to law firm Goodmans LLP.

In 2010, Nipissing University in North Bay renamed its campus library the Harris Learning Library as the result of the purchase of naming rights by philanthropist Seymour Schulich; in that same year, Harris received an honorary Doctor of Letters degree from the university.

Harris joined the board of Magna International in 2011, but stepped down one year later. In 2012, he and his wife Laura started a Nurse Next Door franchise, a home-care company aimed at assisting seniors. In 2013, he joined business law firm Fasken Martineau as senior business advisor.

In 2014, Harris was selected by the Harper Conservative government to join a Canadian mission to observe the Ukrainian presidential election.

In 1967, at age 21, Harris married his first wife, Mary Coward, but the marriage fell apart within two years. In 1974, he married Janet Harrison, with whom he has two sons, Michael, Jr. and Jeffrey. In 1999, Mike and Janet Harris separated; and, in 2005, after their divorce, he married Laura Maguire. 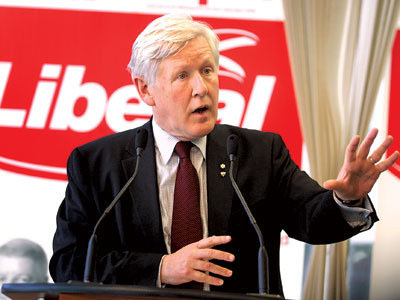