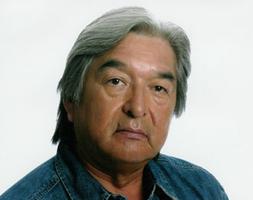 Graham Greene, actor (b at Six Nations Reserve, Brantford, Ont 22 June 1952). Graham Greene is one of the most respected First Nations actors of his generation. An Oneida of the Iroquois confederacy, he was raised in Hamilton, Ont, and worked his way through a series of manual jobs, including audio technician for rock bands, before becoming involved with theatre in the late 1970s in England and Canada.

His movie debut came in 1983 with Don Shebib's Running Brave, and he continued with small parts in independent Canadian and American films such as Spirit Bay (1984), Powwow Highway (1989), Where the Spirit Lives (1989) and Lost in the Barrens (1990). He rose to international prominence with his Academy Award-nominated performance as Kicking Bird in Dances with Wolves, one of the most popular and acclaimed films of 1990. The role of the Sioux shaman who educates a cavalry officer in tribal culture is in many ways the locus of the film's idealized view of Native American life, but Greene's multifaceted performance makes Kicking Bird less a paragon than a man who accepts both the tragedy and the comedy of existence.

An actor of uncommon intensity, Graham Greene gave an astonishing performance as a vengeful Native spirit in Richard Bugajski's seldom seen Clearcut (1991). Yet Greene has rarely gone out of his way to embrace iconographic Indian parts, preferring character roles that exist apart from ethnicity or gender, such as the New York cop in Die Hard with a Vengeance (1995), the beleaguered family man in Bad Money (1999), and the philosophical groundskeeper in Léa Pool's Lost and Delirious (2000). Even when playing an Aboriginal role, he impresses first as a dryly deft comedian, as displayed in his success in the popular Canadian television series The Red Green Show and in Dudley the Dragon, for which he won the 1994 and 1998 Gemini Awards for best performance in a children's program. In 1994 he was also nominated for a Gemini for his appearance in North of 60, and in 1997 he was nominated for his featured supporting role in The Outer Limits. In 2004 he was given the Earle Grey Award for Lifetime Achievement by the Academy of Canadian Film and Television.

Graham Greene is not unfamiliar with the theatre, receiving the Dora Mavor Moore Award for his part in Tomson Highway's Dry Lips Oughta Move to Kapuskasing in 1989. He appeared on the Stratford Festival stage in 2007 in Steinbeck's Of Mice and Men and in the central role of Shylock in The Merchant of Venice.