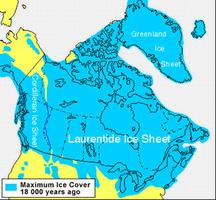 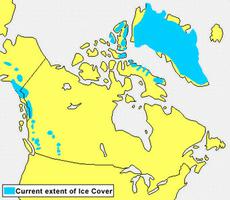 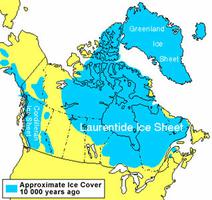 Glaciation is the formation, movement and recession of glaciers. Glaciation was much more extensive in the past, when much of the world was covered in large, continental ice sheets. Currently, glaciers cover about 10 per cent of the world's land area (14.9 million km2). Most of this area is under two ice sheets situated near the Earth’s poles — one near the Antarctic and the other near Greenland. The world’s remaining glaciers only cover about 700,000 km2. Much of Canada’s landscape was molded by glaciers over thousands of years. Valleys were widened, moraines were sculpted and bedrock was smoothed. Glaciation also left behind many sediments, including gravel, which is important to Canada’s export economy.

As glaciers expand and recede, erosion may occur. Erosion by glaciers takes place mainly by two methods: abrasion and quarrying.

Abrasion occurs when fine particles and fragments held in the ice, situated at or near the base of a glacier, move across the underlying material, which is commonly called bedrock. The process of abrasion can striate and polish fragments in the ice and the underlying rock, as well as form elongated, gutter-like channels (known as flutings) in the bedrock.

Quarrying is the process by which blocks of bedrock are removed by overriding ice. This usually occurs at points where the bedrock is easily fractured, such as joints. Roches moutonnées are one example of a land formation caused by quarrying. They are large, asymmetrical, knob-like bedrock features with streamlined sides tapering up-glacier, and steep, abruptly broken sides down-glacier.

In general, more erosion and removal of material takes place in valley glaciers, where the ice is confined by topography, than in the areas that are less constrained, such as ice caps and ice sheets. Examples of features formed by valley glaciers include u-shaped valleys, such as the Bow Valley in the Rocky Mountains. This type of erosion deepened and widened pre-existing river valleys.

As erosion takes place in one area, deposition may occur in another. Deposition is the process in which glaciers add sand, minerals and other materials to the bedrock underneath. Forms such as drumlins and certain kinds of ground moraines can form under moving ice. However, most glacier deposition takes place as the ice retreats.

Some examples of depositional features include: hummocky moraines (high-relief forms consisting of mounds, ridges and knobs, some of which are doughnut-shaped); cross-valley, ribbed, washboard, De Geer, push, ice-thrusted, and recessional moraines (bow-shaped ridges of varying heights and lengths); terminal moraines (single, prominent ridges marking the limit of a glacial advance); and ground moraines.

Most of these features contain a high percentage of glacial till, which is unstratified, unsorted material deposited directly from a glacier. It usually consists of a heterogeneous mixture of clay, silt, sand, pebbles, cobbles and boulders. The exact composition of till will generally reflect what’s in the local bedrock. Till can be divided into several types depending on the location of debris in the ice and how it was deposited.

Meltwater is another type of deposit left by glaciers. It can originate from the surface, inside or at the base of a glacier. It may form braided streams beyond the glacier’s border. These streams can become an interconnecting network of shallow channels that carry and deposit gravel and sand.

Gravel is an important industrial resource in Canada, and some of the largest deposits have resulted from glacier-derived braided streams. An excellent modern example is the Donjek River in Yukon. The Donjek Glacier in the Saint Elias mountain range fed this river. Kames (short, knobby elevations) and eskers (sinuous ridges in rivers) result from the deposition of sand and gravel by glacial streams.

Lakes that were created from glacial deposits are found across Canada. The lakes were formed when the glacier either dammed the lake or left deposits that impeded draining. Lake Agassiz, which covers most of Manitoba and parts of Saskatchewan and Ontario, is an outstanding example of a glacially dammed lake. Sediment in glacial lakes consists mostly of silt and clay. These deposits will commonly form varves, which are coarse and fine layers of sediment that are deposited annually. Beach ridges, composed of gravel and sand, occur along the margins of some former glacial lakes.

When glaciers retreat, the newly exposed areas tend to lack vegetation and have a lot of exposed sand and silt. When wind picks up sediment in these areas, sand dunes and loess can form. Dunes are formed by the shifting of sand, which is either carried by water or wind (a process known as saltation) or through the process of traction (when the sediment rolls along a surface and grows in size). Loess deposits consist of fine sand and silt and originate from suspended material that may have been carried hundreds of kilometres (see Aeolian Landform).

The size and succession of glacial deposits also give a sense of the history of the glaciers that created them, including how far and how often glaciers expanded in the past.

Glaciation took place several times in the Earth’s history, but scientists know the most about the glacial activity of the past two to three million years. During the Pleistocene Ice age, as much as 30 per cent of the Earth's surface was covered by glaciers. Glaciers formed and expanded in mountainous regions throughout the world. In northern latitudes including Canada and Northern Europe, ice caps developed and expanded into ice sheets. During this time, about 97 per cent of Canada was covered in ice, explaining why Canada contains more glaciated terrain than any other country.

The number of major glaciations that occurred during the ice age is open to question. Traditionally, four glaciations were recognized, each lasting approximately 100,000 years. These periods were separated by long, warmer periods. From oldest to youngest, these periods are called the Nebraskan, Kansan, Illinoian and Wisconsinan in North America. Within these major glaciations, minor glacier retreats and advances happened. New evidence and reinterpretation of old data suggest that ice did expand and retreat many times, but the complexity of the data is such that it is not even possible to say with certainty that there actually were four major glaciations. Much is known about the Wisconsinan, but the other three glaciations are far less understood.

More extensive glaciations took place in Canada prior to the late Wisconsinan, although there is evidence in Western Canada that parts of the Laurentide ice sheet, which covered most of Canada, flowed beyond any earlier limits. It is not known if the earlier, more extensive ice took place during the early Wisconsinan or if it represents a major glaciation of its own, such as the Illinoian.

It is evident, however, that during the Pleistocene era, ice never flowed far beyond the late Wisconsinan limits. Glaciers never extended into the northern Yukon and parts of the Northwest Territories. In addition, the highest peaks of Western Canada and the higher hills on the prairies (for example the Cypress Hills) have never been glaciated. These uncovered peaks are called nunataks. Although the climate was severe enough to support glaciers during this period, there was not enough moisture to nourish their expansion.

Enough information is available from glacial deposits and radiocarbon-dated organic samples to give a reasonable account of what Wisconsinan glaciers were like in Canada. Sometime after about 100,000 years, ice caps formed and expanded in several parts of Canada. Major areas of accumulation included the Keewatin Sector, the Labradorian Sector and the Foxe-Baffin Sector. Minor ice caps formed in the Atlantic Provinces and the arctic islands. In time, these ice caps coalesced, forming the Laurentide ice sheet. At about the same time, valley glaciers expanded in the western mountains and eventually formed the Cordilleran ice sheet.

There is conflicting evidence about how far the ice sheets expanded initially. At least one retreat occurred before the final onslaught, which probably began about 25,000 years ago. There is also evidence that the time of maximum expansion of the ice sheets varied from region to region. The Laurentide ice sheet probably had a maximum ice thickness close to 4,000 metres; that of the Cordilleran ice sheet may have been close to 2,000 metres.

As the ice sheets receded, most of the glacial landforms seen today across Canada were formed. There were minor re-advances of the ice during the overall retreat, but in general glaciers receded relatively rapidly. Most of the ice was gone by 10,000 years ago. Since that time, glacial and other landforms have been modified by various agents such as water and wind. However, these changes have been minor, and the preservation of the present glacial landscape is ensured for thousands of years to come.