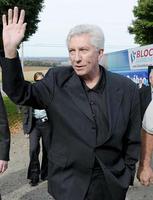 Gilles Duceppe, politician (born 22 July 1947 in Montréal, QC). Duceppe, a Québec sovereigntist, was a Member of Parliament from 1990 to 2011, and leader of the Bloc Québécois from 1997 to 2011 and in 2015. He also served as leader of the Opposition in 1996 and 1997. After the Bloc lost 43 seats in the 2011 federal election, he resigned as party leader. However, in June 2015 he returned to lead the Bloc, in an attempt to revive the party’s popularity in Québec. Although the Bloc won 10 seats in the October 2015 federal election, Duceppe lost in his own riding and resigned as party leader.

Son of the well-known actor Jean Duceppe, Gilles Duceppe was educated at Collège Mont-Saint-Louis, then studied political science at the Université de Montréal. In 1968 he became vice-president of the Union générale des étudiants du Québec (General Union of Quebec Students) and in 1970 he became the manager of the Université de Montréal student paper Le Quartier latin. In 1972 he launched his career in community and union settings as moderator for the citizens' committee of Hochelaga-Maisonneuve, then in 1977 as a representative for Royal Victoria Hospital employees. In 1981 he was appointed union organizer for the CSN/CNTU (Confédération des syndicats nationaux/Confederation of National Trade Unions), where he became a negotiator in 1986.

In a 1990 by-election, Gilles Duceppe became the first sovereigntist Member of Parliament elected to Ottawa under the banner of the Bloc Québécois. Also that year, he was a replacement member for the Bélanger-Campeau Commission, which examined Québec’s constitutional future in Canada following the failure of the Meech Lake Accord. In 1991 and 1992 he was a member of the national executive of Mouvement Québec, an organization dedicated to preserving the French language in Canada. Within the Bloc Québécois he took office as party speaker for Indian Affairs, Multiculturalism, National Defence, Veterans' Affairs, Labour, Employment, Immigration, and the Status of Women. In September 1993 he was re-elected MP for the riding of Laurier-Sainte-Marie, and became the opposition whip.

Leader of the Bloc

On 15 March 1997, Duceppe succeeded Gauthier as leader of the Bloc Québécois and leader of the Opposition. On 2 June 1997 he was re-elected MP for Laurier-Sainte-Marie and his party took 45 of the 75 Québec seats in the House of Commons. The Bloc's popularity decreased in the subsequent 2000 election, with the party winning only 38 ridings. In 2004, however, the Bloc gained popularity in the wake of the Liberal sponsorship scandal, securing 54 of the 75 seats in Québec.

In 2006, a reinvigorated Conservative Party, led by Stephen Harper, gained support in some areas of Québec. Though the Bloc secured 51 seats (and 43 per cent of the popular vote) the results in 2006 were a letdown for Bloc supporters who had hoped to achieve 50 per cent support from Quebecers. In 2007, Duceppe made the surprising decision to run for provincial politics as the leader of the Parti Québécois. (Though he had been offered the same chance in 2005, Duceppe then felt the separatist cause in Québec would be better served if he remained the federal Bloc leader.) The following day Duceppe reconsidered his options and decided not to run, placing his wholehearted support behind candidate Pauline Marois. He was eagerly welcomed back by the Bloc with nearly 95 per cent of the party's support.

Duceppe maintained his political mandate leading up to the 2008 election. During his fourth term as leader he pressured Harper to address what Duceppe and others believed was a fiscal imbalance between the federal government and the provinces. In addition, he petitioned the prime minister to recognize Québec as a nation and he stood firm against cuts to cultural programs in the province. His platform leading into the 2008 election centered on Québec's ability to deal with its own culture and economic stability, and its own approach to the penal system and the system's young offenders. On 14 October Duceppe and the Bloc won 49 seats. Although the Liberals formed the official opposition, Duceppe credited the party as the main factor in preventing a Conservative majority government.

Soon after the general election of 2008, Stephen Harper's Conservative government launched a series of controversial economic proposals, stirring the three opposition parties — the Bloc Québécois, Liberals and the NDP — to begin talks of a coalition intended to bring down the Conservatives in a vote of non-confidence. On 1 December 2008 the three party leaders signed a historic accord, intending to introduce a non-confidence motion as early as the following week. Ultimately, Harper's request to prorogue Parliament was granted by Governor GeneralMichaëlle Jean and the durability of the coalition became questionable.

The political landscape changed significantly with the 2011 federal election, in which the Conservatives won a majority. The NDP won the most seats in its history, becoming the Official Opposition for the first time, largely on the strength of an impressive showing in Québec, where the party captured seats from both the Liberals and the Bloc Québécois. The Liberals won the fewest seats in its history, and party leader Michael Ignatieff was defeated in his own riding. Like the Liberal leader, Gilles Duceppe lost his own riding. Overall, the Bloc lost 43 seats in the election — with only 4 seats left in the House, it also lost official party status. Duceppe subsequently resigned, after over 14 years as leader of the party.

In January 2012, Duceppe was accused of paying the Bloc’s general manager with funds intended for his parliamentary office; this was alleged to have occurred over a seven-year period. In November 2012, the House of Commons Board of Internal Economy found that Duceppe had misused funds. However, as regulations were arguably unclear at the time the money was spent, the board did not take any further action against Duceppe.

After his resignation as party leader of the Bloc, Duceppe was a columnist for Le Journal de Montréal, and sat on the boards of the Théâtre Jean-Duceppe and the legal clinic Juripop.

In May 2015, Mario Beaulieu, who had become leader of the Bloc Québécois in June 2014, asked Duceppe to return as party leader in advance of the 2015 federal election. Polls consistently showed that the Bloc had less than 20 per cent support in Québec, and many felt that Duceppe could revive the party’s flagging fortunes. On 10 June 2015, Duceppe announced he was returning as leader of the Bloc Québécois, while Beaulieu would remain party president. Although the Bloc won 10 seats in the October 2015 federal election, Duceppe lost in his own riding. Three days later, he announced his resignation as party leader.