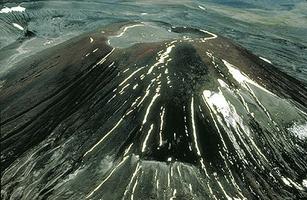 One of the composite and (at present) dormant volcanoes that form a belt from northern BC to the southern Yukon (photo by J.A. Kraulis). 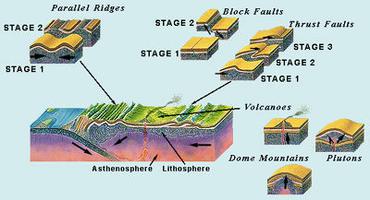 Every day of our lives we interact with the planet we live on. Normally, the interaction is quiet and unobtrusive and we take a stable ENVIRONMENT for granted. But at times we are reminded that this planet changes: a VOLCANO erupts in a remote country and its dust reduces sunlight by 5% for a few years; an EARTHQUAKE leaves thousands dead or homeless. We have been forced to become aware of the limitations and fragility of the Earth, and of problems such as acid rain and toxic-waste pollution. Geology deals primarily with the study of the planet Earth. Significant questions involve the size, shape and chemical makeup of the Earth, now and throughout geological time. Of equal importance are questions about the origin and evolution of life, and about resources and the possible effects of resource limitations on human development and survival.

Earth is 70.8% covered by water, but only with the development of sonar techniques has it become possible to describe the solid earth below the oceans. With increasingly sophisticated satellite observations, relatively fine structural details (eg, areas of volcanic activity) can be seen. With modern techniques geologists can observe on almost all appropriate scales: we can "see" the entire planet on a scale of 107 m and, with electron microscopes, we can see atoms of 1/1010 m diameter.

Today, with the human population increasing by almost 100 million annually, there are growing problems with WATER supply, SOIL CONSERVATION, ENERGY supply (over 90% of our energy comes from oil, gas and coal), use of materials from copper to phosphate fertilizers (we use 20 t of rock per person per year) and waste disposal from plutonium to plastics. All such problems require exact knowledge of the Earth to solve. Of growing importance is the need for exact information on the factors which change CLIMATE on various time scales - climate never was and never will be constant.

Canada has the second-largest land area (after Russia) and the longest coastline of any nation, as well as a vast area of continental shelf. Its population is small, the natural resources vast. Geology in Canada may have begun with Jacques CARTIER when, in the 1530s, he returned to France with a load of worthless crystals he thought were diamonds. Martin FROBISHER made the same error in the 1570s, mining quantities of useless ore on Baffin Island. In the early 1800s, systematic geological mapping in Europe was becoming a science. The Industrial Revolution demanded coal, iron ore and other minerals, and early hit-and-miss PROSPECTING techniques were proving costly. Public interest in geology broadened as the study of rocks accelerated and, inevitably, as dogmas concerning time and life came under fire. In Canada, the systematic study of geology can be said to have begun in 1842 with the founding of the GEOLOGICAL SURVEY OF CANADA(GSC).

Early geologists in Canada went far beyond the massive task of describing the stratigraphy and producing accurate maps; they were true natural scientists who described every aspect of the natural and human environment.

The great traditions established at that time have continued, and the present GSC remains a world leader. The mineral industry was slow in attaining worldwide importance. It was not until after 1945 that the steel, oil and gas industries began accelerated development; Canada first exported oil in 1949. The community of geologists grew with the mineral and oil boom. Canada became a leader in techniques for REMOTE SENSING, for geophysical techniques based on gravity, and for seismic, magnetic and electrical methods of mapping. Canada is a world leader in radar satellite technology (seeGEOMATICS CANADA). As detailed maps improved, the most favourable rocks for particular resources became better understood.

Canada perhaps still leads the world in modern prospecting technology, and Canadian geologists are sought in developing countries to assist in exploration programs. As the resource industries became increasingly important, the provinces began to build their own more specialized surveys, which have come to assist and amplify the task of the GSC. The membership patterns of the various specialized societies (involving government, university and industry representatives) illustrate the strength of the geological community.

Abbé Jean Holmes began geology instruction in Canada early in the 19th century at the SÉMINAIRE DE QUÉBEC (later Université Laval). The first geology department was established at University of Toronto in 1853. To provide for the training of young geologists, William LOGAN endowed a professorship of geology and palaeontology at McGill University. In 1855, J.W. DAWSON became principal of McGill and first incumbent of that chair. By the end of the 19th century, there were 6 geology departments in Canadian universities. The most impressive growth occurred between 1949 and 1970, when the number of these departments increased from 15 to 30. Earth science instruction also takes place in departments of geography, physics, mineral and mining engineering, civil engineering (geotechnique) and soil science. Geochemistry and geomorphology are also geological subjects.

Relation to Other Sciences and Society

To many, the most important justification for the study of geology is the necessity of providing raw materials. In Canada, the economic aspect of the science is large: in 1993, MINERALS provided one-quarter of all exports. Today, the impact of earth sciences goes much further than mineral and energy production. Geochemists are skilled in the analysis of trace quantities of metals and hence are in demand for the study of environmental aspects of inorganic pollution (eg, heavy metals). Geologists are needed when dams, highways, airports, nuclear power plants, urban expansion or even agricultural developments are planned. Earth scientists are involved in any problem focusing on human impact on the environment, such as the global problem of water supply. The University of Waterloo has become a world leader in problems of world water supply.

The earth sciences have always had close links to other sciences. Thus, the solid-state physics of materials under extreme pressure and temperature is closely related to studies of the deep Earth and of objects in space. Views on nuclide synthesis in stars draw heavily on data from geochemistry. For biology, studies of fossil organic matter in rocks make a vital contribution to an understanding of the origin of life and its tolerance to environmental change. Recent work has also revealed that micro-organisms are often prolific deep below the surface. The present record is 4.2 km below the surface at 110°C. Perhaps this is where life began on an early chaotic planet.

Modern geologists require knowledge from many related sciences; for example, the palaeontologist needs biology; the geophysicist, physics and applied mathematics; the structural geologist, a background in solids mechanics and fluid dynamics.

The Canadian Geoscience Council, a group whose membership consists of the societies listed above, co-ordinates information from all subdisciplines. It also publishes special studies (eg, a pamphlet on careers in geoscience). The Geological Survey of Canada and the various provincial surveys publish bulletins and maps and supply information of local and general geological significance. The ROYAL SOCIETY OF CANADA, through its Canadian Global Change Program (CGCP), co-ordinates research at the national level for the International Geosphere-Biosphere Program as well as other international initiatives. The Alberta Research Council is a leader in many aspects of energy resources.