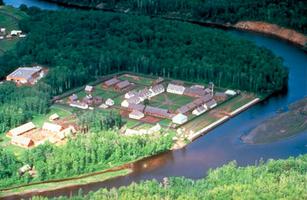 Fort William, Ontario, was the centre of the northwestern fur trade (courtesy Ontario Ministry of Tourism). 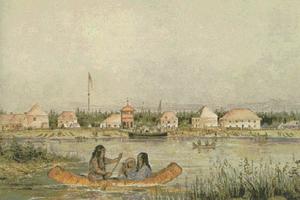 The Hudson's Bay Co post on Lake Superior, 1857, in a watercolour by William Napier (courtesy Library and Archives Canada).
PreviousNext

In 1803 the NORTH WEST CO constructed a new fort at its Lake Superior headquarters, replacing GRAND PORTAGE, which had come under US jurisdiction. At the mouth of the Kaministiquia River some 50 km north of the international boundary, the new depot served until 1821 as the site for the NWC's annual summer rendezvous of Montréal agents and WINTERING PARTNERS, and as its major transshipment point for furs and trade goods.

Named in 1807 after NWC chief superintendent William MCGILLIVRAY, Fort William occupied a pivotal place in the company's vast trading network. In 1816-17 Lord SELKIRK occupied Fort William for 10 months as a consequence of the SEVEN OAKS INCIDENT. This occupation, combined with major financial difficulties, led to the NWC merger with the HUDSON'S BAY CO in 1821. With the Montréal transportation system virtually abandoned in favour of the HBC's, Fort William lost its importance in the FUR TRADE. As a post and fishing station of the HBC, it gradually declined until its closure in 1883.

In 1902 its last standing structure, the NWC's Stone Store, was demolished to make way for the Canadian Pacific Railway's expanding grain and freight shipping facilities. The only reminders of Fort William's fur-trade past now at its original site are the local historical society's cairn, unveiled 1916, the Historic Sites and Monuments Board's marker, erected 1981, and neighbouring street signs bearing the names of renowned NWC and HBC fur traders.

Prompted by the community's active interest in Fort William's role as gateway between East and West, and also by the recognized potential of heritage attractions for tourism, the Ontario government decided in 1971 to reconstruct Fort William to the NWC period. Known as Fort William Historical Park, the reconstruction is located in THUNDER BAY, Ontario, at Pointe de Meuron, 14 km upriver from the original site. Through its costumed staff, the fort's living historical program depicts the activities of the rendezvous, the annual gathering of Scots traders, French Canadian VOYAGEURS and native trappers. It also portrays the fur-trade society and material culture of the early 19th century. Other facilities include a visitor centre, resource library, gift shop, and one of Canada's largest outdoor amphitheatres. Fort William Historical Park also offers programs for schools, special-interest groups and businesses along with numerous special events and festivals every year.