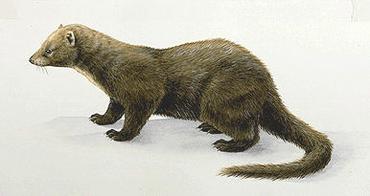 The fisher is a solitary hunter, secretive and seldom seen (artwork by Todd Telander). 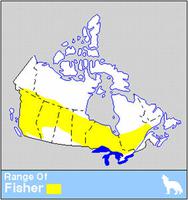 The 2 x 2 tracks in snow of the fisher. The fisher would have been walking towards the camera (courtesy Alpha Wildlife Research and Management Ltd).
PreviousNext

The Fisher (Martes pennanti) is a member of the weasel family, with a typically pointed face and rounded ears. In Canada, fishers live in the boreal and temperate forests of almost all the provinces and territories, with the exception of Newfoundland and Labrador and Prince Edward Island.

The long and slender body of the fisher has a dense, dark brown to black fur coat with grizzled brown patterns around the shoulders and back, and a bushy tail. Females have finer, more lustrous fur than males. Legs are strong and short; paws have five digits. Body length ranges from 51 to 63 cm; tail, 33-38 cm. The male (2.7-5.4 kg) is almost twice as large as the female (1.4-3.2 kg). Fishers usually meander through the forest, or run in a typical two-by-two pattern where two sets of tracks, one slightly ahead of the other, is followed by another set of two, and so on.

The fisher is found in boreal and temperate forests of the Canadian provinces and territories, except Newfoundland and Labrador and Prince Edward Island, north to latitude 60º. It prefers landscapes of mature and old coniferous and mixed-coniferous-deciduous forests interspersed with younger stands.

Fishers feed mainly on snowshoe hares, squirrels and small mammals. They are known for their ability to prey on porcupines.

Fishers are generally solitary except during mating season (March-April), when they are polygamous. The gestation period is about 350 days because of delayed implantation of the fertilized egg in the uterus. Maternal dens are usually found in cavities of deciduous trees. Young (one-three) are born in March.

They are sexually mature by one year of age, but effective breeding may not occur before two years of age. Their life expectancy is about 10 years.

Across Canada the fisher is classified as a furbearer, and is harvested over 65 per cent of its range. Most populations are stable or increasing. Fisher populations are vulnerable to habitat loss through logging, fire, oil and natural gas exploration, and urban encroachment.