First Nations and Métis Peoples in the War of 1812 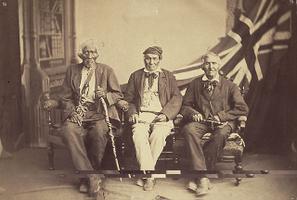 The Treaty of Paris, 1783, which concluded the American Revolution (1775–83), reversed the land rights gains made by First Nations peoples in the earlier Royal Proclamation of 1763. The surrendering of all lands west of the Ohio River to the newly-formed United States caused shock among Indigenous peoples in the west. By the end of the 18th century, a coalition among the Indigenous groups became an urgent political necessity in the face of nonstop American expansion.

To this end, in 1793, 29 nations assembled at the Miami Rapids in the Wyandot territory of Ohio before a planned meeting with American peace commissioners at Sandusky. Negotiating on behalf of the Six Nations, Joseph Brant (Thayendanegea) (1742–1807), was one of the leaders trying to forge an alliance. The Indigenous groups discussed a loose confederacy and some agreed to hold the boundary that had been established by the Treaty of Fort Stanwix in 1768. Yet, a full agreement could not be reached. The failure of the peace talks at Sandusky was aggravated by Americans who assumed that they had automatically acquired title to all land east of the Mississippi. In the subsequent battles that erupted, Indigenous forces twice defeated the Americans, but the Americans gathered a large fighting force and destroyed the coalition at the Battle of Fallen Timbers in 1794.

While Indigenous communities struggled to resist American encroachment, relations between Britain and the United States were also strained by the Chesapeake–Leopard Affair (1807), continuing economic sanctions and recurring diplomatic arguments over the British capturing American sailors and forcing them to serve in the British Navy. This led the British to conclude that an all-out war with the Americans was inevitable. London therefore instructed Governor General Sir James Craig (1748–1812) to ensure the loyalty of the western nations. As the British were fighting Napoleon and his allies in Europe (see Napoleonic Wars), they were convinced that Indigenous support would be vital in an American war. To many First Nations and Native Americans, the unreliable British were still better allies than the expansionist Americans.

The Emergence of Tecumseh

After the death of Brant, a new Native American leader emerged, the Shawnee war chief Tecumseh (1768–1813). Tecumseh sided with the British, not because he fully trusted them, but because he saw them as a strategic ally with common interests. In his mission, Tecumseh was linked with a religious leader, his brother Tenskwatawa (1775–1836). Known as "the Prophet," Tenskwatawa's Indigenous-focused religious revival prepared the way for Tecumseh's political intertribal movement. Tecumseh preached that the land belonged to all Indigenous peoples, not to specific groups, and that no tribe had the right to surrender any land. That could only be done with the agreement of all. In 1808, Tecumseh and Tenskwatawa founded the village of Prophetstown at the junction of the Wabash and Tippecanoe Rivers. Their hope was that the village would become the centre of an Indigenous confederacy.

On 7 November 1811, Indiana governor William Henry Harrison (1773–1841) took advantage of Tecumseh's absence to attack Prophetstown (see Battle of Tippecanoe). After some heavy losses from an attack by Native Americans, Harrison burned Prophetstown to the ground and destroyed the food supply. Tecumseh was anxious for revenge and impatient in waiting for the British.

Tecumseh was an imposing figure who combined a passionate concern for his people with an acute strategic military sense. During the War of 1812, a large number of Indigenous groups fought under Tecumseh, who gained the alliance of the Potawatomi, Ojibwa, Shawnee, Odawa, Kickapoo and others, though not all groups supported him.

The War of 1812 was a turning point for many Indigenous peoples, being the last conflict in north-eastern North America in which their participation was important, if not critical. On 17 July 1812, shortly after the war began, the American Fort Michilimackinac was captured by a force under British captain Charles Roberts, comprising approximately 400 Indigenous warriors (300 Odawa and Ojibwe and 100 Sioux, Menominee, and Winnebago), 200 voyageurs (including Métis) and 45 British troops. After word of the victory at Michilimackinac, more Indigenous peoples flocked to the British cause. In August, Shawnee Chief Tecumseh and 600 Indigenous warriors (Shawnee, Ojibwa, Odawa, and Potawatomi) were instrumental in the surrender on 16 August of a superior American force at Detroit. Tecumseh and General Brock rode side-by-side into the fallen fort. In turn, the fall of Detroit spurred on the Six Nations and the Delaware who were an important factor in the American defeat at Queenston Heights on 13 October 1812 under the leadership of John Norton (Teyoninhokarawen)and John Brant (Ahyonwaeghs).

Later, Tecumseh defeated an American force at Fort Meigs, Ohio, on 5 May 1813. On 24 June 1813, the Iroquois played the central role in the Battle of Beaver Dams. According to Mohawk leader John Norton, "the Caughnawagas fought the battle, the Mohawks got the plunder and Fitzgibbon got the credit."

While most battles that involved Indigenous warriors occurred in the Western theatre of the war or along the Great Lakes, there was also a strong Indigenous presence at the Battle of Ogdensburg, 22 February 1813, and the Battle of Crysler’s Farm, 11 November 1813. Further east, in Lower Canada, a combined force of Mohawk, Wendat, Algonquin, Abenaki and Canadian Voltigeurs under Charles de Salaberry (1778–1829) drove out American forces at Chateauguay.

Yet, the fruits of early success began to wither as war continued. The American naval victory on Lake Erie, 10 September, cut the British supply line to Amherstburg, thus endangering the support of Indigenous peoples. The new British general Henry Procter (1763–1822), who had succeeded Brock, did not impress Tecumseh. Procter was retreating from battle but decided, perhaps at Tecumseh's urging, to make a stand at Moraviantown (on the Thames River). Because Proctor didn’t want to continue to fight, the brunt of the fighting fell to the Indigenous contingent. Tecumseh was killed and his Indigenous fighters were driven off. No one knows what happened to the great chief's body. His loss is difficult to overestimate. When Tecumseh died, the dream of an independent Indigenous territory within North America died with him. Nevertheless, Indigenous warriors continued to fight alongside the British until the end of the war. Some also fought alongside the Americans, who persuaded a group of Seneca to fight on their side at Chippawa, 5 July 1814.

During negotiations for the Treaty of Ghent (1814), that ended the War, the British tried to bargain for the creation of an Indian Territory, but the American delegates refused to agree. The most they would accept was the amount of territory the Indigenous peoples had before the war. This was a profound disappointment and loss for many Indigenous groups; despite their efforts, they had been unable to recover traditional territory. In 1816, Indiana became a state and formalized processes to remove Indigenous peoples from their traditional lands and welcome new waves of American and European settlers.

For Indigenous peoples living in British North America, the War of 1812 also marked the end of an era of self-reliance and self-determination. Soon they would become outnumbered by settlers in their own lands. Any social or political influence enjoyed before the war dissipated. Within a generation, the contributions of so many different peoples, working together with their British and Canadian allies against a common foe, would be all but forgotten.