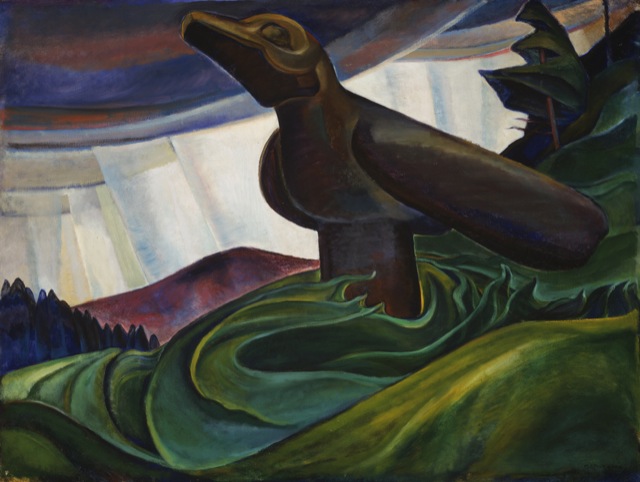 Emily Carr, 1931, oil on canvas. Carr's painting was deeply influenced by the art of the Northwest Coast First Nations. 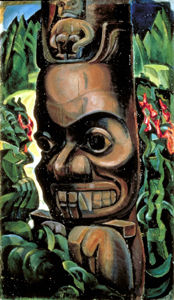 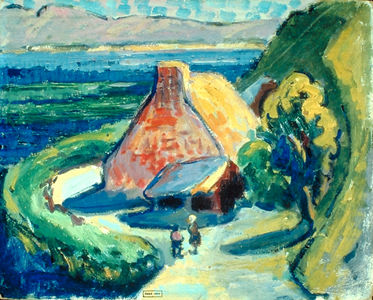 Emily Carr, painter, writer (born 13 December 1871 in Victoria, BC; died 2 March 1945 in Victoria). Along with Tom Thomson, the Group of Seven, and David Milne, Emily Carr was one of the preeminent, and perhaps most original, Canadian painters of the first half of the twentieth century; she was also one of the only major female artists in either North America or Europe of that period. In Carr’s mature paintings, like the great Indian Church (1929) in the Art Gallery of Ontario, nature is a furious vortex of organic growth depicted with curving shapes that create the impression of constant movement and transformation. By comparison, the human element – churches, houses, totem poles – seem small and fragile. 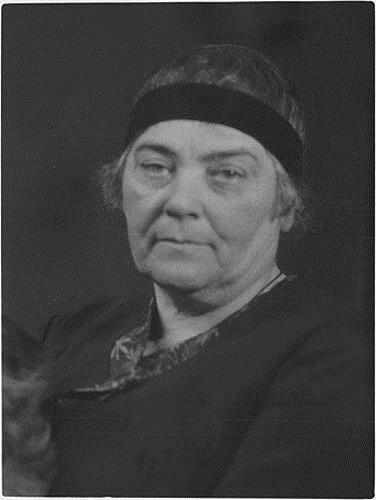 Carr’s parents were British immigrants who had settled in the small provincial town of Victoria, where her father became a successful merchant. She grew up there with a brother and four older sisters in a disciplined and orderly household where English manners and values were maintained. Although Carr had no serious artistic role models to follow while growing up, she experienced the pleasures of drawing as a child, and when she was orphaned in her early teens, she persuaded her guardians to permit her to go to San Francisco to study art at the California School of Design once she turned 18. There she learned the basic elements of the craft of painting, and when she returned home after a little over three years, she began painting in watercolour and set up art classes for children.

A study trip to England in 1899 did little to advance her art and was prolonged by a lengthy illness into 1905, when she returned to Victoria. There she became aware, even in the isolation of her hometown, that the larger world of art encompassed more than the conventional art with which she was familiar and which she herself practised. In 1910, determined to find out what the new modernist art was all about, she gathered up her savings and set out with her sister Alice for France. In Paris she entered classes at Studio Colarossi, but found private study with British expatriate artist Harry Gibb more helpful. Radical experiments in cubism and fauvism then being undertaken by Pablo Picasso, Georges Braque, Henri Matisse, André Derain and other artists in Paris escaped her, but she developed her own bold, colourful, post-impressionist style of painting, which she brought back to Victoria in 1912.

The Discovery of Aboriginal Culture

Even before 1908, when she had visited several southern Kwakiutl villages, Carr had shown an interest in Aboriginal peoples, their traditional culture and their material works – especially houses, totem poles, and masks. At that time, Indigenous culture was thought to be dying under the waves of white cultural encroachment on their lands, languages and cultural practices. Despite her keen interest in Aboriginal culture, Carr shared the prevailing attitude that this was an inevitable process. After her return from France in the summer of 1912, and having announced her intention of making a visual record of Aboriginal totem poles in their village settings before they disappeared, Carr made an ambitious six-week trip north to the Queen Charlotte Islands and the Skeena River, where she documented the art of the Haida, Gitksan and Tsimshian. The drawings and watercolours she made on this and subsequent trips provided the source material for one of the two great themes of her painting career: the material presence of the Aboriginal cultures of the past. Her often adventurous trips in search of this material also led her more deeply into her second great theme: the distinctive landscape of west coast Canada.

Emily Carr continued to paint in her vivid, painterly "French style" for about 10 years, producing small paintings that would have been seen as advanced in any part of Canada. But it was not the approach that was to lead her into the fullness of her achievement. By 1913 she had produced a substantial body of distinguished work, but dispirited by the absence of encouragement and support and unable to live by the sale of her art, she built a small apartment house in Victoria for income. She spent most of the next fifteen depressing years managing the apartment and painting little.

The period of mature, highly original work on which Carr's reputation today rests commenced when Carr was already 57 years old. It was triggered by the discovery of her early work on Indigenous subjects by an ethnologist carrying out his studies in British Columbia. He brought her paintings of Aboriginal themes to the attention of curators at the National Gallery of Canada in Ottawa, who were then in the process of organizing an exhibition of West Coast Aboriginal art. Carr was invited to participate in the exhibition and was sent a railway pass to go to eastern Canada to attend the opening in November 1927. There she met Lawren Harris and other members of the Group of Seven, then the leading art group in English-speaking Canada, who welcomed her into their company as an artist of their own stature. Their paintings of the rugged landscape of northern Canada impressed her greatly, as did their avowed intention to produce a distinctively Canadian art. She quickly snapped out of her feeling of artistic isolation on the West Coast and returned to painting with renewed ambition.

Following her success in eastern Canada, and with Lawren Harris as her mentor, Carr began to paint the bold, almost hallucinatory canvases with which many people identify her - paintings of Aboriginal totem poles set in deep forest locations or the sites of abandoned Indigenous villages. After a year or two she left Aboriginal subjects to devote herself to nature themes. From 1928 on, critical recognition and exposure in exhibitions of more than regional significance, like the National Gallery of Canada and the American Federation of Artists in Washington, D.C., began to come her way. There was even the occasional sale, though never enough to improve her financial situation. In full mastery of her talents and with deepening vision, she continued to produce a great body of paintings freely expressive of the large rhythms of Western forests, driftwood-tossed beaches and expansive skies, like Indian Church (1929), Loggers’ Culls (1935), and Heart of the Forest (1935).

In 1937, Carr suffered her first heart attack, which marked the beginning of a decline in her health and a lessening of the energy required for painting. She began to devote more time to writing, an activity she had commenced many years before with the encouragement of Ira Dilworth, an educator and CBC executive. Her first book, Klee Wyck, a collection of short stories based on her experiences with Aboriginal people, was published in 1941, a year that also effectively marked the end of her painting career. The book won a Governor General's Award and was followed by the publication of four other books, two of them posthumously. Printed in more than 20 languages, they are today known in many parts of the world. All of them were autobiographical in nature, portraying a girl or a woman of enormous spirit and individuality. Written in a simple, unpretentious style, they quickly won her the popular audience that eluded her more difficult paintings, though in the end it is primarily as a painter that she has won critical acclaim.

More than half a century after her death, Carr has become a Canadian icon, known to many who are not readers or who know nothing about art. She could not be thought of as a careerist, yet her timing, innocent as it was, turned out to be perfect in several respects. Her long preoccupation with the Indigenous culture of the Canadian west coast coincided with the beginnings of a rising tide of awareness and confident self-identification on the part of Aboriginal people who had for some time been considered part of a moribund culture. At the same time, it coincided with a recognition by the dominant society that First Nations issues must be addressed. Carr herself would be harshly criticized for her "appropriation" of Aboriginal images when the demand for "political correctness" was rampant in the 1980s, though there is no question that her strong projection of those images has served to accentuate her social relevance. In the same way, her passionate involvement with nature and its portrayal coincided with a growing popular awareness of environmental issues and an accompanying sense of loss associated with the disappearance of "nature" in our own day.

The two main themes of her work, Aboriginal culture and the natural world, were side doors through which ordinary people could access her art, but other factors have contributed to her fame. The fact that she was a woman fighting the overwhelming obstacles that faced women of her day to become an artist of stunning originality and strength has made her a favourite of the women's movement. As well, the pattern of her career with its delayed start (really not until the age of 57) and late fulfillment creates a personal drama that is humanly very appealing. Still, such considerations sidestep the central fact that it was her qualities as a painter, qualities of painterly skill and vision, that enabled her to give form to a Pacific mythos that was so carefully distilled in her imagination. Even though we may never have visited the West Coast, we feel that we know it through her art.

In the last two decades, Carr’s appeal has extended beyond Canada's borders. While Emily Carr remains a national icon, she has now begun to be appreciated as an important twentieth-century artist, as witnessed by her inclusion in several recent major exhibitions. In 2001-02, she was included alongside Georgia O'Keeffe and Frida Kahlo in a critically acclaimed touring exhibition titled Places of Their Own, organized by the McMichael Canadian Art Collection, and more recently an exhibition of seven of her paintings from the permanent collection of the Vancouver Art Gallery were selected for display at dOCUMENTA (13), the prestigious international art showcase held every five years in Kassel, Germany.