Denis Coderre, politician, federal cabinet minister, mayor of Montreal 2013–17 (born 25 July 1963 in Joliette, QC). A federal politician for 16 years, Coderre moved into municipal politics and was elected mayor of Montreal in November 2013. Although credited with cleaning up the city’s administration, Coderre lost the November 2017 election to Valérie Plante, becoming the first Montreal mayor in 57 years to lose after only one term.

Denis Coderre, politician, federal cabinet minister, mayor of Montreal 2013–17 (born 25 July 1963 in Joliette, QC). A federal politician for 16 years, Coderre moved into municipal politics and was elected mayor of Montreal in November 2013. Although credited with cleaning up the city’s administration, Coderre lost the November 2017 election to Valérie Plante, becoming the first Montreal mayor in 57 years to lose after only one term.

Denis Coderre is the son of carpenter Elphège Coderre and housewife Lucie Baillargeon. He grew up in the tiny village of Saint-Adolphe-de-Rodriguez, about 100 kilometres from Montreal, and moved to Montréal-Nord in 1973. Coderre caught the politics bug at an early age as head of the student association at his high school, Polyvalente Henri-Bourassa.

At age 17, Coderre campaigned for the Yes side (in favour of sovereignty-association) in the 1980 referendum out of admiration for Parti Québécois premier René Lévesque. However, years later he became a staunch federalist. (See also Federalism in Canada.) He completed a political science degree at the Université de Montréal and obtained an Executive Master of Business Administration from the University of Ottawa. In 1985, Coderre was elected the Québec chapter president of the Young Liberals of Canada. (See Liberal Party.)

Denis Coderre was a Liberal Party candidate in the federal elections of 1988 and 1993, and also in a 1990 by-election. He lost all three contests (in the 1993 election he was defeated by a mere 53 votes). He finally won a seat in the House of Commons in 1997 and went on to represent the Montreal riding of Bourassa as a Liberal MP for the next 16 years.

In 1999, Prime Minister Jean Chrétien named Coderre as Secretary of State for Amateur Sport. Coderre managed to shine in the normally obscure post, by playing a role in bringing the World Anti-Doping Agency (WADA) from Lausanne, Switzerland, to Montreal in 2002. That same year, he was named minister of Citizenship and Immigration. This portfolio gave him important national security responsibilities in the months following the 11 September 2001 terror attacks. Coderre also played an influential role in the adoption of the Immigration and Refugee Protection Act. He also helped implement measures to regulate immigration consultants. (See also Immigration Policy in Canada.)

Coderre faced controversy in 2006 when Phoenix Coyotes captain Shane Doan filed a $250,000 lawsuit against the Liberal MP. Doan claimed that Coderre falsely accused him of making an ethnic slur against francophone referees during a National Hockey League (NHL) game between Phoenix and Montreal. Coderre asked Hockey Canada president Bob Nicholson to expel the Coyotes captain from Canada's Olympic team unless he formally apologized. The NHL reviewed the allegations against Doan and concluded they were baseless.

On 22 January 2009, Coderre became the Quebec lieutenant for federal Liberal leader Michael Ignatieff. He was now responsible for party operations in Quebec. However, Coderre quit the post months later over a disagreement about who should be nominated as the candidate in the Montreal riding of Outremont. Coderre criticized Ignatieff for trying to run Québec politics from Ontario.

In June 2013, Denis Coderre resigned his seat in Parliament to run for mayor of Montreal. He was elected mayor on 3 November, garnering only 32 per cent of the vote — the lowest percentage in the history of Montreal’s elected mayors. He assumed office after what had been a tumultuous 12-month period in Montreal politics. During that period, long-time mayor Gérald Tremblay had resigned after his political party was implicated in an illegal financing scheme. The interim mayor Michael Applebaum had also quit after being arrested on corruption charges. One of Coderre's first moves as mayor was to recruit Denis Gallant as the city’s inspector general to oversee city contracts. Gallant has been a lawyer on the Charbonneau commission that investigated corruption.

Coderre immediately set out to instill a new sense of optimism in the city. He frequently repeated the catchphrase, “Montreal is back.” During his tenure, he campaigned tirelessly for the return of the Montreal Expos, the baseball team that left the city in 2004. Coderre introduced a municipal baseball policy to upgrade neglected baseball fields in the city. The mayor also met with Major League Baseball commissioner Rob Manfred to stress the city’s interest in a franchise.

Coderre regarding the Expos’ return:
“In my mind, it’s not an if, it’s a when,”

Along with Expos memorabilia, his office was furnished with a desk that belonged to former Montreal mayor Jean Drapeau, who presided over projects such as the city’s subway system and Olympic Stadium. Opposition critics complained that Coderre channelled Drapeau’s autocratic style.

No stranger to garnering attention, Denis Coderre took a jackhammer in 2015 to the concrete base of a Canada Post community mailbox — a publicity stunt against the postage system’s leaders. The latter had decided to install community boxes against the city’s wishes. The same year Coderre proceeded, despite harsh opposition, with a plan to dump an estimated 8-billion litres of raw sewage into the St. Lawrence River. This was done to conduct needed repairs to the sewage treatment system. Donning a protective suit and mask, Coderre toured the area undergoing repairs. He stated that this convinced him of the necessity of the move. 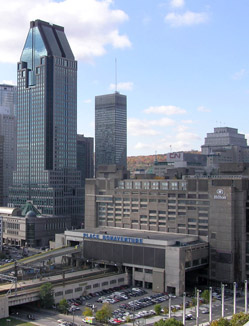 Entering the 2017 municipal election campaign, Denis Coderre seemed to be well ahead of challenger Valérie Plante in the polls. He said Montreal was “living an exceptional time.” He listed some of his accomplishments such as a buoyant city economy, heavy spending on infrastructure, a planned light-rail system and the creation of an inspector- general’s office to fight corruption.

However, Coderre drew flak for his perceived arrogant and autocratic style. A $24 million Formula E electric car race in July 2017 shut city streets for several weeks, angering residents. And Coderre refused to divulge how many tickets to the event had been given away, until the final days of the campaign. Some dog owners greeted a city ban on pit bulls with outrage. Coderre also appeared to take his re-election for granted until polls late in the campaign showed him actually tied with Plante, a city councillor. After all, the city had not had a one-term mayor since 1960 when Jean Drapeau defeated incumbent Sarto Fournier. But on election day on 5 November 2017, Coderre lost to Plante by five percentage points. Plante received 51 per cent of votes, while Coderre only got 46 per cent. Later on, Coderre mentioned that he had lost because of a personal crisis in his life.

In November 2020, a poll from Léger suggested that mayor Valérie Plante was not very popular. 60 per cent of Montrealers preferred having someone else in charge. The poll also showed that Denis Coderre had a 16 percentage point lead over Plante if he we were to run. (See Public Opinion.) In March 2021, Coderre officially announced that he was running.

Coderre ran his campaign with a focus on social cohesion, or “le vivre ensemble” (living together). He criticized Plante’s divisive urbanism policies, namely regarding cars and cycling. His campaign also focused on public safety as firearm violence became an issue. Coderre took a hit when he refused to disclose his financial records until very late in the campaign. His previous links with private companies and lack of transparency were criticized.

On election day on 7 November 2021, Plante was declared the winner over Coderre. She increased her share of the vote to 52 per cent versus Coderre’s 38 per cent. Balarama Holness came in third with 7.2 per cent of votes.