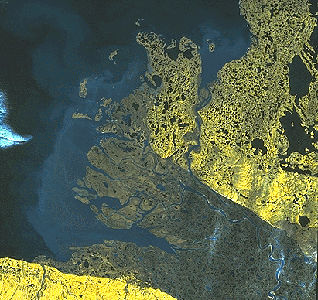 This satellite image shows one of the world's largest river deltas. It has formed over thousands of years as the river deposits silt and sand into the Beaufort Sea. The maze of islands and streams are home to wildlife (courtesy Canada Centre for Remote Sensing). 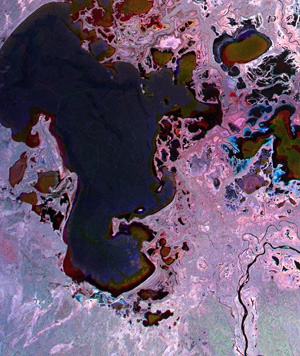 The movement of rivers erodes soil and bedrock from the land and carries these particles, called sediment, downstream. The speed of a river slows when it meets a standing body of water such as a lake or ocean. It consequently loses the force needed to carry material such as gravel, sand, silt and clay, and these particles (called alluvium) settle on the riverbed. Over time, sediment accumulates and forms land.

Deltas vary enormously in scale and complexity. The majority fall into one of the following five categories:

A number of factors control the shape of large deltas, many of which have persisted over long periods of time. These factors include the way water moves across the land (see Hydrology), the nature of transported sediment, wave and tidal dynamics, sea-level changes, the movement of the Earth’s crust, and basin and coastline geography. Density differences between the sediment-laden river water and the lake or ocean water determine the movement patterns of inflowing water and shape the delta’s growth. For example, the inflowing water may move below the surface, down the slope at the front of the delta; spread out over the surface of the standing body of water; or mix with it.

Large deltas, such as that of the Saskatchewan River, consist of a vast network of distributary channels. As these deltas develop, so, too, does a low-lying delta plain that features different sedimentary environments such as levees, backswamps and marshes (see Wetlands).

The word delta is also the name of the fourth letter of the Greek alphabet, Δ. The term came to denote the landform because the triangular shape of the capital letter delta resembles many examples of these deposits.

Industrial Use and Environmental Concerns

Underground reserves of oil and gas can form with the layering of sedimentary environments over time, as seen in the Mackenzie River delta region in the Northwest Territories. In 2011, the National Energy Board (NEB) approved Imperial Oil’s proposal for the Mackenzie Gas Project, which would connect gas extraction operations in the Mackenzie River delta to northern Alberta (see also Petroleum Research and Development). The project has been debated since the 1970s and has attracted support as well as opposition from First Nations in the region. The NEB has given Imperial Oil until the end of 2022 to begin construction. 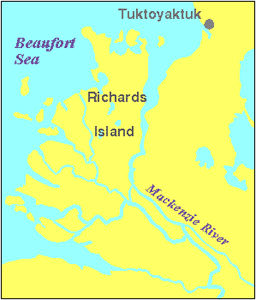 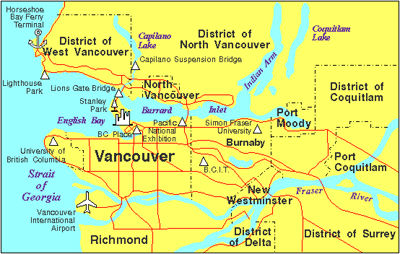 The Fraser River delta, located in British Columbia’s populous Lower Mainland area, was designated a Wetland of International Importance by the Ramsar Convention on 22 September 2012. This international agreement sets out a framework for protecting wetland ecosystems. Industrial development on the delta, such as the proposed Terminal 2 shipping facility at Roberts Bank in Delta, BC, are controversial due to the importance of the Fraser River delta as a stopover for migratory birds.

Flood control is also a challenge in delta lowlands. In the case of the Fraser River delta, for example, researchers anticipate the need for greater investment in flood protection measures as sea levels rise due to climate change.