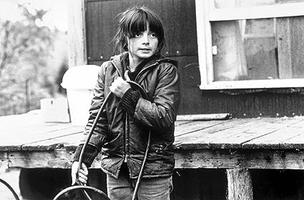 In an isolated house near a small town in the Laurentians, 13-year-old Manon (Charlotte Laurier) lives with her unmarried mother, Michelle (Marie Tifo), and her mother's developmentally disabled brother, Guy (Germain Houde). They survive by doing odd jobs and chopping and selling firewood to affluent resort homes nearby. Manon is a precocious and sensitive child, uninterested in school and obsessed with obtaining her mother's absolute love. Guy lives in a world of his own, roused by his romantic response to the wealthy Madame Viau-Vachon (Louise Marleau).

In addition to Manon and Guy, Michelle is surrounded by two other people who demand her affection: Maurice (Roger Lebel), her good-natured policeman boyfriend, and Gaétan (Gilbert Sicotte), a mechanic and friend of Manon. When Michelle discovers she is pregnant by Maurice, she attempts to share her joy with Manon, but it has the opposite effect. The codependent and obsessive Manon leaves home, desperate to prove she is capable of caring for her mother in every possible way. After she returns, she drives Guy to suicide, prevents her mother from hearing the news, and cuts her mother's emotional ties to Maurice and the outside world.

Francis Mankiewicz’s evocative Gothic tale of passion, jealousy and all-embracing love was based on the first original screenplay by renowned Québec novelist and dramatist Réjean Ducharme, a reclusive genius often regarded as Canada’s J. D. Salinger. “Through the film,” the Montreal Film Journal’s Kevin Laforest has observed, “you can feel Ducharme’s characteristic uneasiness in society. Here’s a guy who probably can’t fit in the restrictions of life, and his characters share that feeling… Like Ducharme’s novels, this is a film about people who refuse to leave their childhood, or who did and feel shattered.”

Canadian critics were virtually unanimous in their reviews, praising the baroque poetry of the film's dialogue, its austere, evocative imagery, spare narrative action and brilliant performances. Also noted were the ways in which Mankiewicz melded the various elements of the film to generate a sense of menace, building to a horrific crescendo.

The film quickly entered the canon of Canadian cinema and is widely recognized as one of the best Canadian films ever made. However, as Toronto International Film Festival (TIFF) programmer Steve Gravestock has argued, it’s “an odd film to canonize” since it doesn’t directly address “culturally fundamental issues for Canadians.” Instead, the film’s strengths stem from its unusual character dynamics, the contrast of soft lyricism and bracing realism established by cinematographer Michel Brault, and the film’s dark, Gothic undertones. The low-budget film (made for around $620,000) surprised many when it swept the 1981 Genie Awards, beating out Bob Clark’s $11 million tax-shelter production, Tribute (1980), starring Jack Lemmon and Colleen Dewhurst.

Les bons débarras was selected as Canada’s entry for the Oscar for Best Foreign Language Film and received a limited release in the United States, where it was received somewhat quizzically and met with decidedly mixed reviews. Janet Maslin of the New York Times called it “a meandering movie with a curious kind of staying power. Its bleak locale is so realistically outlined and its characters so vividly etched that it's possible to feel as if you know the people and the place intimately, even while wondering why you'd want to… When ‘Les Bons Debarras’ tries to escalate into a thriller, its flair for atmosphere and detail becomes overshadowed by the inadequacies of the narrative. Until that time, though, Mr. Mankiewicz and a convincing cast of newcomers make the film original and unsettling.” Dave Kehr of the Chicago Reader wrote that the film “alternates between sentimental miserablism and freezing irony,” and that “Mankiewicz possesses a dark, provocative sensibility, yet he isn't sufficiently in control of his medium to produce a coherent work out of his conflicting moods.”

Les bons débarras was named one of the Top 10 Canadian films of all time in polls conducted by TIFF in 1984, 1993 and 2004. In a 2003 survey conducted by Montréal’s La Presse, it was voted the best film in the history of Québec cinema. TIFF programmer Steve Gravestock argued in 2007 that, “The only other films as well thought of domestically (it doesn’t have the same reputation internationally) are Don Shebib’s Goin’ Down the Road (1970), Claude Jutra’s Mon oncle Antoine(1971), and Michel Brault’s Les Ordres(1974). Indeed, Les bons débarras may now be better respected than the first two films — long seen as the respective pinnacles of the Québécois and English-Canadian film industries.”

In 1996, Les bons débarras was one of 10 films honoured with postage stamps by Canada Post to commemorate 100 years of cinema in Canada. A restored print was screened in TIFF’s Canadian Open Vault programme in 2007 and released in a limited run in selected Canadian cities. It was also screened at the Festival Lumière de Lyon in October 2014. In 2016, it was named one of 150 essential works in Canadian cinema history in a poll of 200 media professionals conducted by TIFF, Library and Archives Canada, the Cinémathèque québécoise and The Cinematheque in Vancouver in anticipation of the Canada 150 celebrations in 2017.

Performance by an Actor in a Supporting Role (Germain Houde)

Performance by an Actress in a Leading Role (Marie Tifo)